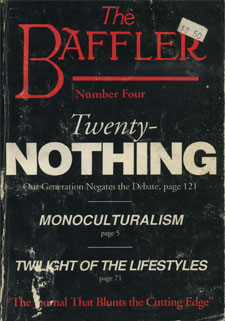 Another Baffler: this one the oldest I’ve ever seen, from 1992. It’s a very young piece of work, self-consciously so: the contributor’s notes at the beginning identifies the ages of everyone involved. (“David Berman (26) and company have a 7” record out on Drag City. Band: Silver Jews. Sound: difficult but rewarding.”) After the contributor’s notes, there’s a piece that “was read at a real-life provocation staged by The Baffer on October 21, 1992 at the Hot House, a Chicago “performance space” and favorite art-lifestyle hangout”. That’s followed by the lead editorial, Tom Frank’s “Art As Lifestyle,” set in bold Helvetica for blunter impact, one supposes. Then there’s “Bafflers Behind Bars” which narrates how the editors where mistakenly arrested for provocation and spent “12 to 18 hours” in jail: at this distance, it’s hard to know if this is a joke or if the editors are legitimately proud of the credibility that comes from going to jail for one’s art. Scattered between these are a couple of poems, a full-page photograph of a sheep, and an “ask a post-structuralist” advice column that isn’t very funny. This issue, then, is something of a mess, though it’s enjoyable. Potshots at postmodernism hearken to a time when critical theory was something that people could be afraid of (and a time when ads from Critical Inquiry could subsidize your publication). One notes obsessions with Thierry Muggler and Prague (both seemingly from afar). Lexicographers should take note of a memo from Quaker Oats, in which they propose using the term “granola” to mean the sandal-wearing set. There’s the pre-mature appearance of the “New Urban Hipster” in a fictional piece by Keith White, also set in Prague.

There’s a lot of fiction in here; there’s also a lot of poetry, and a smattering of art. It might be worth tracking down what happened to most of these writers, as most of them are utterly unknown to me: presumably they were people floating around U. Chicago in the early 90s. But there’s a predominance of non-fiction here: it seems by design, a project to present an alternative to the mainstream. Mat Lebowitz’s “Uncoupling” is a chronicle of yuppy New York of the time in the style of Brett Easton Ellis: perhaps this is what Walter Benn Michaels was calling for in his demand for capitalist realism in the style of The Wire, though I can’t help but find an echo of the criss-crossed generations of Henry Green’s Nothing in it. It is worth looking at how the creative work functions here: a good deal of it (though not all) is pointedly socially engaged, to the general detriment of the poetry. The end of D. M. Mulcahy’s “Libidinal Tourist,” looking at how Prague was being marketed as a bohemian paradise, turns into a manifesto:

There are two worlds, that of those who live life and that of those who purchase lifestyle. Therefore we at The Baffler consider worthwhile only that art which understands these relations. To those artists we despise, we will not say, “Your painting is bad; your music is boring; your writing is trite.” We will say instead, “Your lifestyle sucks.”

The critical side of this is taken up by a pair of pieces about Donna Tartt’s The Secret History, a novel “eclipsed by the event of its publication”. (See, for example, a piece from the New York Times business section.) Maura Mahoney’s “The Packaging of a Literary Persona” is unabashedly snarky; but it’s hard to say that Tartt didn’t deserve it though, when Vanity Fair was evidently gushing about how she had T. S. Eliot reading “The Waste Land” on her answering machine. Mahoney does nail the appeal of the novel: “Young, professional, liberal-arts alumni, nostalgic for the life of the mind while experiencing the harsh truths of the life of the paycheck have been targeted to consume the Tarttian version of their most cherished myth – if it’s elitist, it must be art.” Mahoney’s piece is complemented by a shorter one by Richard F. Kolbusz, Jr., examining the novel’s dust jackets – by Chip Kidd, before he was a household name.

What I like most about this issue is how unabashedly amateur it is: from the typography, which systematically marches through all the native Mac fonts from 1992, to the fiction and poetry clearly written by their friends. (Particularly “Honey,” a soppy love poem written by “A.P.,” identified only by initials: maybe this is an inside joke?) The origin of the odd layout of later Bafflers, where shorter articles snaked down the margins of longer articles for spread after spread, can be seen here; here, though, the inside and outside articles tend to be on the same subject, revealing it to be typographic experimentation: somebody clearly had seen a copy of Derrida’s Glas. There’s a scan of a draft of “The Libidinal Tourist” signed by Mike Ditka; there’s a fashion shoot featuring the editors. The final section, “Twenty-Nothing” turns into a Gen-X manifesto, written at a moment when the mass media was busy codifying grunge. There’s an entertaining prediction of the future:

More disturbing is the thought of these products being sold in the form of nostalgia years from now. We can doubtless look forward to television shows like “Slammin’,” chronicling the adventures of a group of alienated Washington D.C. teenagers who use peculiar dance rituals to express their misunderstandings with the parents. “This Old Garage,” will peek in on the coming of age of a homosexual vegetarian brother and his feminist sister as they clash and come together on the fringes of the Seattle rock world. More important than the shows will be the products sold along with them. As teens today sport the tie-dyed shirts of the sixties and the bell-bottoms of the seventies, so will our children model Doc Martens, special hair-griming formulas, and knee-exposing jeans in the year 2005.

“Twenty-Nothing” is more impassioned than reasoned; it doesn’t stand up very well, like most manifestos, or, for that matter, most writing by the young and excited:

Our youthful vision of the world was influenced more by Minor Threat (‘who’s that?‘ you wonder) than by the Partridge Family.

In retrospect, one might say that two roads diverge here, like when hardcore punk spawned emo and straight-edge. The Gen X self-consciousness points the way to Dave Eggers’s Might, where politics was rejected in favor of cultural whimsy – The Real World even comes in for generational scrutiny here. (Shiny Adidas Tracksuits and the Death of Camp, read five years ago, didn’t hold up very well at all.) Deeper political engagement leads to the later Baffler, the one that’s remembered, as well as Thomas Frank’s career. There’s not as much recourse to arguments from American history here as there would be later: while the history of American populism is tentatively brought out towards the end, it’s not as fully deployed as it later would be, perhaps for fear of seeming overly academic.

8 thoughts on “the baffler #4: your lifestyle sucks!”