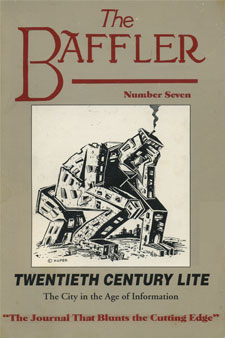 The Baffler #7: The City in the Age of Information
ed. Thomas Frank

I’m still working my way through back issues of the Baffler. This one was laid out in June 1995; after quotations from Randolph Bourne and Edmund Wilson, the copyright page proudly announces that they don’t have an email address (or telephone). Tom Frank’s “Twentieth Century Lite” lays out the theme for the issue: the rhetoric of the right, led by Newt Gingrich, had it that the rise of the information age obviated the need for cities. Everything was about to change. Some things haven’t changed: David Brooks was spouting idiocies back then as well, but for the City Journal rather than the New York Times. A George Gilder quote stands out: “The telecosm can destroy cities because then you can get all the diversity, all the serendipity, all the exuberant variety that you can find in a city in your own living room.” I don’t think that anyone’s still trotting out this idea in a positive sense, at least not publicly, but it’s hard to ignore the effects of the internet, often adverse on the city: there’s no reason for neighborhood book stores if you can get anything cheaper through Amazon.

It’s hard to tell what the idea was with fiction; no fiction editor is listed, although there are poetry and art editors. Short pieces by Janice Eidus and David Berman seem consistent with Baffler style, even if neither is particularly noteworthy; the Berman would work better if it had been declared prose poetry. A brief piece by Irvine Welsh – an excerpt from The Acid House about a trip to Disneyland – feels out of place: reading Scots dialect in this context, one can’t help but think of James Whitcomb Riley. One forgets, though, how much Welsh’s literary reputation declined in this country. Another piece, by Tibor Fischer, doesn’t do much for me; taken together, the two suggest an interest in British models for describing society in fiction, but that isn’t quite matched by the quality of the prose. The poetry – edited by Damon Krukowski – is noticeably better.

But what does it mean when the still existing malt shop (or cafe or pub or laundro-mat) becomes cyberspace? What does it mean when you leave your house, go to public, urban spaces and spend the entire time ignoring the people around you in favor of finding out more about some angster in Texas named Bryon who has posted his entire diary on the internet in all of its excruciating detail, including a picture of his ex-girl friend Sandi’s cat and the heartwarming description of his relationship with his best friend Kriss: “We do a lot of things together, usually related to computer hardware (buying, selling, fixing).”

This isn’t a particularly good piece – bemoaning the wave of hype that then surrounded cybercafes – but here she gets to something useful, anticipating most of the next decade.

The bulk of the issue is spent examining the current state of the city. The last piece in the book, “A Machine for Forgetting” sees Tom Frank examining Kansas City, getting started on the job of figuring out what the matter with Kansas was. Kim Phillips takes on Chicago, briefly; Robert Fiore looks at Los Angeles selling off its infrastructure. Steve Healy and Dan Bischoff cover Athens and Atlanta, respectively, and a Maura Mahoney review Midnight in the Garden of Good and Evil accuses John Berendt of cultural tourism in Savannah. Paul Lukas’s “Forty-Two Pickup” surveys Times Square while Disneyfication was underway but not yet assured of success: it’s a familiar story by now, but the portrait of a New York that still seemed to be wavering between identities. It can be hard to remember now how much the middle of the country’s perception of New York has changed. Lukas’s predictions of the future, like most predictions of the future, are entirely wrong, but it’s good to be reminded that there was a point when an alternative could be imagined.

Most interesting to me was Diamonds Mulcahey’s “Screw Capital of the World,” a survey of the history of Rockford, Illinois, the crumbling city where I was born. There was not a great emphasis on the history of Rockford when I grew up; common consensus was that it was too boring to have a history. The opening of a piece by Calvin Trillin in the New Yorker from 1976 which Mulcahey points out gives a good idea of the civic tenor:

In Rockford, there is always a lot of talk about negativism. Rockford people discuss negativism the way college students in the fifties discuss apathy – as an endemic, mildly regrettable, permanent condition. Apathy is also discussed in Rockford, usually in conversations about negativism.

Trillin’s article covers Rockford at a moment when extracurriculars had been dropped in the public schools because the voting public wouldn’t vote for increased property taxes; my high school was similarly threatened just before I arrived there, but sports were deemed too important. Trillin also points out that forced busing in the schools was an enormous issue even then; this was still dragging through the courts long after I’d left and Mulcahey’s article was written.

Mulcahey’s piece starts with a history of the Palmer raids of 1920, when 180 suspected Communists working in the tool-making and furniture factories were arrested. I’d never heard of this; Wikipedia, which manages to covers Cheap Trick repeatedly, also seems to have missed how the Rockford Daily Republic had declared Rockford to be “a veritable breeding palace for those who plot the overthrow of the United States by force.” Clarence Darrow successfully defended a Swede against charges of sedition. It’s not surprising that this would have fallen out of the historical narrative, but it does help explain how Rockford fell apart as a city. In 1945, Rockford was the “Screw Capital of the World”; but by the time I was growing up, that nickname had been forgotten, and we learned that it was the “Forest City,” on account of the elm trees that lined the streets before Dutch elm disease. (The visitor’s bureau seems unhappy about “Screw Capital of the World”.) In 1945, Life portrayed Rockford as an illustration of “the phenomenon of social mobility.” But Rockford was anomalous early on for being a right-leaning blue-collar city, which comes across strongly in the Trillin piece from 1976, when he finds that everyone is unwilling to pay for education. Industry left; by 1993, Money magazine rated Rockford the worst place to live of the 300 largest American cities.

This is a fantastic piece, anticipating a great deal that’s happened in the politics of the middle of the country since; it’s unfortunate that this piece seems to have no representation at all online. I suspect this wasn’t collected because of the similarity with Frank’s Kansas City. Fitting, really, for a second city to a second city.