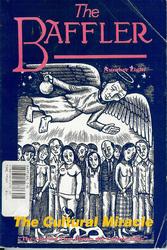 I don’t think that I ever actually had a copy of this issue of The Baffler, #8 from early 1996, though pieces are familiar from their appearance in Commodify Your Dissent (my copy of which is, as far as I know, still in a warehouse about a rug factory in north Somerville). The arrival of Baffler 18 seemed like a good excuse to pick up old issues that I was missing – most show up on Amazon used for not much – & this was the first to arrive in the mail. At sixteen years old, this is an old issue, almost a pre-Internet Baffler: there are a couple of web addresses in the ads for Sub Pop and Dusty Groove, but those are the only acknowledgments that the web existed. The (first) Internet Boom hadn’t happened; Monica Lewinsky hadn’t happened yet, and Newt Gingrich was ascendent. There’s an ad for The For Carnation on the inside back cover; most of the full-page ads seem to be connected to Sub Pop in some way or another. Both poems (“Cantos for James Michener”) and drawings by David Berman feature prominently. Okay Soda is mentioned not in nostalgia but as a present horror; the marketing of Red Dog beer, which I’d completely forgotten about, appears more than once.

That said: it’s strange how contemporary so much of this feels. Maybe that’s this moment speaking, when the Supreme Court has decided that as legal people, corporations deserve to have free speech, real health care reform has been taken off the table again, and when the Democrats can’t even hang on to Teddy Kennedy’s seat. I don’t think we’ve been in a holding pattern for the past fourteen years; but reading this, you get the sense that we might have arrived back in the same place. Frank’s opening piece, “Gold Diggers of 1996,” which posits that the present has returned to the turbulent 1930s, ready to explode, could be followed, in true Busby Berkeley style, by a “Gold Diggers of 2010”. Some pieces may have been ahead of their time: the Mike Neuwirth short story that closes the issue, about a bartender in East Hampton, seems vastly more appropriate to 2006 than 1996. A piece by Negativland explains how record companies exploited consumer ignorance to artificially raise the price of CDs after decades of attempts to sell different formats; it ends:

So what’s next? How can they get you to buy another copy of your favorite Pearl Jam release when you already have it on CD? Don’t worry, they’ll come up with an answer for you soon.

(p. 31.) That particular story has finished itself; but, as ever, nonconformity is still used to market conformity. Robert Schuller’s Orange County Crystal Cathedral, visited by Tom Vanderbilt, had been superseded by megachurches; Pat Robertson remains. Owen Hatteras’s “Pelf and Powder Blue,” about the public taste for blockbuster shows (Monet & Caillebotte at that time) and America’s lasting taste for the Impressionists feels like a prelude to the popular success of Thomas Kinkade, which A. S. Hamrah took apart in the most recent issue of the magazine. Robert Nedelkoff’s fictional interview with a campaign manager feeling out a Senate run for Steven Seagal is McSweeney’s before the letter.

What’s most striking about this issue – especially when compared to McSweeney’s and what’s followed – is how angry it is. Most of what they were angry about is still worth being angry about. Right-wing “populism” is still a threat to civil society. But I think it’s been hard to sustain outrage in the face of so much that’s happened since: witness, for example. the general indifference to Scott Horton’s report in Harper’s demonstrating that our government has been torturing and killing prisoners and disguising this as suicides; or the military’s seeming need to command & control Haiti before bothering to aid the people. There’s a sense of burn-out on the left presently: the thrill of the Obama win aside, it’s hard to imagine serious change actually happening, and at best the Democrats stand as a bulwark against further right-wing indignities. Here there’s the idea that maybe if people understood these things, they’d wake up. Now one worries that people understand but can’t care.

The indie aspect still looks weird: now the focus on post-punk seems more parochial than anything else, an attempt to graft a politics onto an aesthetic. But in this issue, at least, that mostly comes through the ads, which suggest a certain sort of readership, a readership who were primarily interested in books and Chicago-style post-rock. There’s a lot of Hunter Kennedy (of Drag City/The Minus Times, which seems to still be going) in here; in the TOC, it’s art. Zines will be zines; the roots show through on the ads and art, some of which appear to have been made with scissors, tape, and a photocopier. A Gary Groth piece castigates Quentin Tarantino, then culturally ubiquitous; it’s paired with a piece by Ray Carnie, slamming middlebrow taste in film (then being adopted by emergent media studies programs) in favor of John Cassavetes, at that time impossible to find on video; both of these would be argued differently today when media has become less of an either/or choice.

The most beguiling piece in the issue, for me, is Aaron Cohen’s reclamation of Artie Shaw for the left (online here), which follows an excerpt from Shaw’s Sideman, which was to be a “92-chapter autobiographical novel which, in Dostoevskian fashion, he intends to be the first part of a trilogy”. As far as I can tell, none of these ever appeared; nor did Good Enough Isn’t Good Enough, a multi-disc set of his own work that Shaw was compiling. But the voice of Shaw makes you wonder why you haven’t heard it before. The piece ends with this account of surviving McCarthyism:

I’m convinced that the thing that saved me, the one thing that kept me going, through it all, was sheer downright orneriness, the fact that I was just too damned mulish to lie down and oblige a pack of righteous idiots who believed they cornered the market on truth. Besides, I was curious to see what might happen next. Who knows? (I kept thinking) there may be a sudden outbreak of mass sanity. Hey, don’t laugh. It may happen yet. Listen, anything is possible.