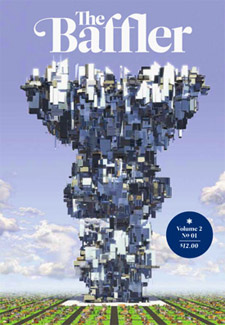 A new issue of The Baffler (number 18) arrived yesterday & I’ve already made my way through it. There aren’t a lot of magazines that I reliably read through on arrival any more: I’ve fallen down on Dot Dot Dot, which was carrying me for a while, though I do generally make it through new issues of Fantastic Man. Everything else piles up. The past decade has been bad for magazines: wandering the magazine stores, it’s hard to find anything that looks necessary. I still miss Nest. Did I miss the Baffler? It never really folded per se, though it did seem like it faded out across the 2000s: the major lights had gone on to better things, and though four issues were released after Bush came into power, offering intelligent critique seemed beside the point in a world so impervious to reason. One can only say “I told you so” for so long.

The media world changed too: though the Baffler had done a superb job of covering the idiocies of the first Internet boom (Tom Frank’s One Market Under God is probably worth re-reading), it seems like they were taken aback with how radically the media landscape had changed. This new issue finds them taking stock: a quick piece by the editors leads off the issue by surveying the unexpected death of established media and the all-too-expected life of Wall Street. Chris Anderson & Wired come in for some old-time bashing. Focus stays on the Internet & the changing media world in the essay section, starting with Christine Smallwood (the problems of thinking about the Internet) and documentarian Astra Taylor (the problem of the artist in a world where everything can be pirated). Naomi Klein looks back at No Logo, examining the assumptions of 1999 (the same piece just appeared in The Guardian: presumably it’s an introduction to a tenth anniversary edition). Michael Lind finds oligarchs in America: at about this point it becomes clear we’re safely back in Baffler territory.

A. S. Hamrah’s piece on Thomas Kinkade and flipping houses is vintage Baffler: maybe my favorite piece in the issue. Yves Smith takes on the excesses of the finance industry. Walter Benn Michaels reprises a piece from Bookforum where he accuses the recent American novel of a lack of engagement with class issues; the piece has been reworked since its last appearance and is stronger for it, though I’m still not sure that championing American Psycho is the right way to do this. Moe Tkacik’s piece on the business writing of the recent bubble is good, though it pales against the memory of Tom Frank’s obvious love for the language of American business. Will Boisvert looks at Detroit; Ryan Ruby surveys the cultural devastation levied on New York by Mike Bloomberg; Jim McNeil looks at housing in DC. Will Schmenner’s piece on movies using the compilation soundtrack as a shortcut to emotion isn’t bad, but it could appear in any number of places; and the essay section is rounded out with the resurrection of an old conservative (Henry Fairlie) to serve as a voice for the progressive.

The magazine looks nicer than it did – though the “fi” ligature in the font they’re using draws an unseemly amount of attention to itself, as does the way they smallcap all abbreviations. There’s a blue bookmark, and the binding is good. The photos, in full color, are beautiful; a graphic section by Angie Walker isn’t particularly strong and feels like it belongs in Harper’s. The back of the book is lighter: a Dan Kelly piece starts with a list of authors drawn from a Facebook meme and explains how they’d do in a fight. Chris Lehmann takes apart revisionist histories of the New Deal; Mike Newirth reconsiders Nelson Algren; Matt Taibbi enjoys Rod Blagojevich’s book as much as anyone can, almost a return to his writing at the eXile. Two fiction pieces, by Paul Maliszewski and Lydia Millet provide a soft ending. There’s no Robert Nedelkoff, which is too bad, but he’ll turn up, I’m sure. It’s a solid issue: it feels revitalized after a long absence: maybe a good place to start volume 2.

In a way, it’s as hard for me to think critically about The Baffler as it is for many to think about Salinger, as it’s one of those things that I found at exactly the right time: the late 90s, the height of the first dot-com boom, at a college that was a charm school for the upper class, where day-trading was taking place over breakfast in the dining halls, everyone had a start-up based on some ridiculous idea which were, astonishingly, getting funded. The Baffler, then, was a necessary corrective: proof that somebody, somewhere was thinking sensibly, and that meant a lot. Coming across old issues on the shelves of used bookstores since then still provides a shock of recognition: it’s tied up with how I constructed myself at a certain point in time.

The magazine seemed to lose its footing after the Bush inauguration: in an era where blatant disregard of facts was the official order of the day, informed criticism felt besides the point. And of course, attention was elsewhere: Thomas Frank’s been doing solid work since then – in-house leftist on the Wall Street Journal‘s opinion page seems a good fit – as have most of the other people involved: Paul Maliszewski’s book on fakery last year, for example, deserved much more press than it received. Maybe the problem is the place of the literary journal right now: a piece by Ted Genoways, editor of the VQR in Mother Jones, suggests that while everyone’s busy submitting to literary magazines, nobody’s actually reading them. (The MFA industry is as readymade a Baffler story as can be imagined.) Attention’s moved: I don’t know that it’s moved elsewhere so much as it’s lost duration. Nobody needs to hear this again. But it’s nice to see the Baffler back.

(Worth noting: a handful of old issues – 11, 16, and 17 – can be downloaded in PDF format by clicking on the individual issues. These seem to be scans of the images)