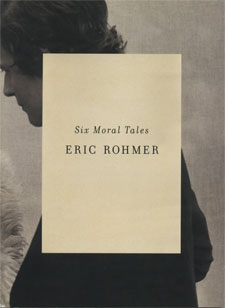 Amazon had the Criterion Six Moral Tales box set for cheap after Éric Rohmer died; I took them up on it, and I’ve been working my way through them. The box set includes six DVDs; in addition to a booklet of critical essays, Rohmer’s book of short stories made from the films is also included. It’s a substantial book (262 pages); off the top of my head, I can’t think of other editions of films that have privileged a text counterpart so much. Criterion’s edition of Last Year at Marienbad, for example, doesn’t include the out-of-print Grove edition of the book, illustrated with the film stills. Nor are there that many films that are so directly connected to literary fiction authored by the director: Antonioni’s That Bowling Alley on the Tiber comes to mind, but there’s a difference between the short stories in that and the films. There’s Marguerite Duras, of course, and Georges Perec, but the films they directed aren’t especially well-known; the exception might be Duras’s India Song.

I’ve been reading the stories after watching all the films, so it’s taken me a while to make my way through this. Reviews of the Six Moral Tales often say that they’re based on a novel; the back cover of this edition says that “years before Eric Rohmer turned to filmmaking, he wrote his famed Six Moral Tales in book form,” which echoes Rohmer’s statement in his preface that the stories “are not adapted from my films.” These assertions are misleading; Rohmer’s is disingenuous. This isn’t a novel; rather, it’s six short stories where the same basic plot (boy has girl; boy meets other girl; boy considers straying) is reenacted, almost in the manner of Queneau’s Exercises in Style. The French copyright date on this is 1974, two years after the last of the films; in addition, it seems clear that these stories were (at the very least) reworked after the making of the films, something more noticeable because the stories and the films are extremely similar.

At the start of the film of La Collectionneause, for example, is a scene where a painter, played by Daniel Pommereulle, talks to an art critic, played by Alain Jouffroy. Jouffroy disappears from the film after this scene; the painter, who is the third-most important character in the film, is identified by others as “Daniel”. The viewer may not know that Jouffroy is best known as an art critic, and that Pommereulle is generally known as an artist. This situation is further confused by the same scene’s treatment in the text:

Daniel – Daniel Pommereulle, to give his full name – is one of those contemporary painters who durin the sixties tossed their paintbrushes into the garbage and turned their creative energies to the manufacture of “objects.” The art critic Alain Jouffroy called them “Objectors,” and in the art magazine Quadrum published an article under this title devoted to their work. The year is 1966, and Jouffroy is paying a visit to Daniel’s studio. (p. 129.)

The article mentioned actually exists – “Les Objecteurs: La ‘Distance infinie’ de Duchamp,” Quadrum, no. 19, 1965, pp. 6–9. La Collectionneuse was released in 1967; possibly the scene was shot in 1966. One wonders, however, whether the conversation between Jouffroy and Pommereulle that follows is theirs or Rohmer’s. The acting credits in the film begin “avec la collaboration pour l’interprétation et les dialogues de”; what’s said in the film is very close to the text, but inexact. Although it’s isolated, almost certainly their scene in the film isn’t documentary: there’s too much relevance to what happens later. The first paragraph of the story, titled “Haydee,” physically describes the main character of the story; the name of this character, the “collectionneuse” of the title, is that of the actress Haydee Politoff, and the description physically matches the actress.

Or again: in “Claire’s Knee,” Jerome explains to Madame W. and Laura that “he and Aurora first met, six years before, when he was the cultural attaché in Bucharest” (p. 173). Why Bucharest? Presumably because Aurora Cornu, who plays a writer in the film, is a Romanian writer. There’s a further overlay here: Aurora (the character) is a writer and claims that she wants to write use Jerome as a character in her book. It’s not by chance that Aurora and Jerome look at a painting of Don Quixote: as Vargas Llosa noted, in the first book, Quixote makes the mistake of trying to read the world through the lens of a book, while in the second, the world, having read the book about Quixote, keeps expecting him to act like a character in it. Rohmer’s introduction again: “My heroes, somewhat like Don Quixote, think of themselves as characters in a novel, but perhaps there isn’t any novel.”

All of these stories tell the story of a male lead who passes through a point of crisis; all of the narrators attempt to justify their generally reprehensible behavior to themselves with flimsy reasoning, the morality of which is belied by the damage they end up doing to others. The most interesting use of this is in the fifth story, “Claire’s Knee,” where Jerome justifies his desire to be unfaithful by explaining to his novelist friend Aurora (who may be a past lover) that he’s acting in the interest of providing her with a story. There’s a distinct echo here of Choderlos de Laclos: and while Aurora, who is at least partially a stand-in for the director, finds his storytelling useful, she’s aware that his stated reasons aren’t his real ones. As in Les Liaisons dangereuses, the relationship between these two characters is more interesting than what they’re plotting; Jerome, however, isn’t aware enough to notice Aurora’s interest in him, or to notice that she, who he has taken as single, has her own distant fiance. The libertine echoes return in “Love in the Afternoon”: early on, the narrator describes his escape by reading in the subway:

On the train, I much prefer reading books to newspapers, not only because newspapers are cumbersome but also because I can’t immerse myself in the papers. Books lead me further afield, and at present I’m very much taken with books on exploration. Today’s book is entitled Voyage autour du Monde by Bougainville. (pp. 217–8.)

Bougainville’s description of Tahiti as paradise, source of the idea of the “noble savage” almost certainly isn’t what the narrator is reading: more likely he’s reading Diderot’s response, Supplément au voyage de Bougainville which sees in the sexual freedom of the Tahitians a model for the libertine reinvention of Western society. (In the film, it’s clear that the narrator’s edition includes Diderot’s supplement.) This also presages Chloe’s later argument against marriage, which the narrator finds tempting, but rejects, that polygamy isn’t degrading to women if women also practice it. For the narrator, it’s an escape from his present bourgeois reality; but it’s not one that he will follow up on.

These stories can’t be separated from the films, and were presumably meant to be read in conjunction with them, although this would have been very difficult for most readers in the 1970s when the films wouldn’t have been immediately accessible as they are now. The films were made from 1962 to 1972; they blossom from black and white shorts about students to full-color feature films about first affianced and finally married couples. While the characters don’t recur – save for a dream sequence in Love in the Afternoon, not reflected in the story – there’s an implicit story of growth, of a director growing more confident with himself. This growing maturity isn’t reflected as much in the stories: while the stories are more complex, Rohmer isn’t interested as much in the different ways that narrative voice can function in fiction. Most of these stories are told in the first person, echoed strongly by the voiceovers of the first films. “La Collectionneuse” starts in the third person from several perspectives (the film’s “prologues”) before it switches to the first. Only “Claire’s Knee” differs, being told in a the third person; this is generally from the perspective of Jerome, but at the end it suddenly switches over to Aurora with a scene that could only be seen by her: “The boy’s left arm is around Claire’s shoulder, and his right hand is caressing her knee.” (p. 213) This isn’t quite reflected in the film: there, the actors sit on a bench with their backs to the camera. The boy may be caressing her knee with his left hand (which would have mattered more to Jerome than to Aurora), but the viewer can’t see this; had the viewer not read the text, they almost certainly would not have presumed this. These are stories that are better told as films, where the camera’s perspective can be unhinged from the task of straightforward narration.