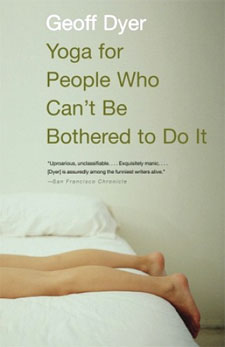 Geoff Dyer
Yoga for People Who Can’t Be Bothered to Do It
(Vintage, 2003)

There are plenty of reasons that I should not like this book by Geoff Dyer: the name of this book, for one; the horrifying blurb on the back suggesting that it was a combination of “Hunter S. Thompson, Roland Barthes, Paul Theroux and Sylvia Plath”; the promise of reading anything about Burning Man. The horrible grunge-y display type used inside for chapter openers, presumably reused from the poorly designed hardcover edition. The copyright page promises that an excerpt from Auden’s “September 1, 1939” is used in a book published in 2003. The prospect of British people writing about the United States. And worst of all, the marketing designation “Travel/Memoir” on the same back cover: a stint in the travel writing business still keeps me filled with horror at the thought of most travel writing and the people associated with it, and it doesn’t need to be said that no one needs another memoir.

And yet I make an exception for Geoff Dyer: somehow, I allow him to get away with things that I find deeply objectionable in most other writers. Part of this is context: I picked this book up at the bookstore in Fort Greene after a disheartening show at BAM, in need of something to pick me up for the subway home. Dyer’s writing works for me in that way as few others can reliably. (Also in this category, off the top of my head: Gertrude Stein, Ashbery’s Three Poems, some of Donald Barthelme, The Man without Qualities. Others exist, I’m sure, but it’s a vanishingly small group.) A lot of this has to do with style: Dyer’s a good enough writer that he can entertainingly talk about nothing will giving off the impression of effortlessness. Closer scrutiny, however, reveals that it’s an effortlessness that’s taken a great deal of work: everything functions. In this book, as in Out of Sheer Rage, Geoff Dyer has the flâneur down to perfection: he pretends to be doing nothing, but there’s a great deal of thought involved in that doing nothing. It helps as well that there’s a sense that Dyer’s using writers to think through the world: Auden and Rilke come up repeatedly in this book (“September 1, 1939,” for what it’s worth, does not come up with respect to 9/11) as do Brodsky and Henry James; epigraphs from the Goncourts and Nietzsche lead off the book. The way he’s using these writers is interesting: not so much name-dropping or academic reference so much as finding people whose thought can be usefully applied to his life. There’s the feeling you’re in the hands of someone who can be trusted, a trust that comes because of these shared points of recognition.

This is a book that’s ostensibly a collection of travel essays: eleven essays about particular places. The copyright page suggests that it’s a compilation, as much of the material has previously been published. It is, to a certain extent; but when read closely, one notes threads connecting the various pieces in the book. A pair of Tevas is bought in the first essay, on New Orleans; these Tevas thread their way through the later essays, just as Rilke and Auden do and a concern with the idea of a “Zone,” found first in Apollinaire and later in Tarkovsky. It’s difficult, however, to ascribe a chronology to these pieces: there are a handful of dates which suggest that these essays take place across the 1990s, but it’s difficult to order them. Girlfriends come and go; there are occasional references to things that came before. One has the sense of a writer who’s constantly traveling: but one can’t sense an overriding narrative in the traveling, the frequent problem with travel writing. (Kenneth Gangemi’s The Volcanoes from Puebla, one of the handful of travel books I like, also escapes the temptation of a narrative arc by the formal device of presenting its short essays in alphabetically.) An introduction to the last essay in the book suggests that it was written in 2000 and describing events of the year before, a decade after the first 1991; however, one is hard-pressed to find a clear sense of growth. Rather, one finds a document of a period in time: how Dyer lived in the 1990s, and how, in a sense, travel worked in that decade. While intended as a document of places, it’s become a document of a time. Travel doesn’t function in quite the same way any more.

Dyer wanders the world: he presents himself as an aimless wanderer, but this is something of a ruse: in the decade he covers, he published at least six books. These books aren’t really mentioned here: the reader familiar with Out of Sheer Rage will be able to place his Roman adventures within that context, and one suspects that his essay on New Orleans has something to do with his book on jazz. Dyer presents himself to the people he meets as a writer: but because he doesn’t mention his books in the text, he seems willing to come across as being without portfolio. Dyer’s presentation of himself contains a weird mix of humility and artifice: he presents his flaws and his frequent disinterest – there’s a certain sense in which this book is an apologia for an extended youth  – but there’s the sense that he’s holding something back. We know what he likes and doesn’t like, but the reader is left with a certain sense of distance after finishing the book: there’s a certain lack of autobiography. We’re not over-familiar. I like this.

The essays themselves vary. The pieces on Detroit, Miami, and New Orleans are better than one might expect, as they don’t overreach. Dyer isn’t trying to draw grand conclusions about American civilization from a city; rather, he records specific interactions and impressions. His descriptions of south-east Asian travels make him out to be one of those terrible tourists that one meets on the road, uninterested in anything around them but the next party: but again, one suspects this isn’t quite the case. The final essay, on Burning Man, shows its age: written at the height of San Francisco Internet boom hubris, there’s talk of Hakim Bey, who seems to have mostly been forgotten now, for better or for worse. Descriptions of drug experiences are almost invariably uninteresting. Here, though, he integrates it into larger experience: telescoping out from his local context to past experiences of travel, to Freud’s discussion of the ruins of Rome as metaphor for the mind in Civilization and Its Discontents, to Francesca Woodman’s photography, to Stalker. It works, though it shouldn’t.

3 thoughts on “geoff dyer, “yoga for people who can’t be bothered to do it””