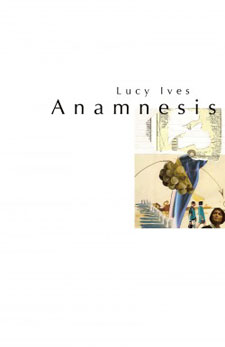 The premise of this book is laid out in its epigraph, by Vito Acconci: “ o .” Deleting the struck-through text, one is left with “o.”: a reminder that the poet can call forth through absence as well as through presence. Anamnesis is a book-length poem about not only writing by also unwriting: not erasure, but crossing out, leaving a record of thought. The book is divided into nine sections by pages that feature only a centered “+”, an interesting device: “+” can be the addition sign, but it might also be a crossed-out vertical line: a negated “I” as appears in the quoted Acconci?

Despite the promise of the epigraph, this is not a book that relies overtly on typographic trickery, though it is deeply engaged in the process of writing, a process that is reenacted in the text. This sounds like the overt premise for a fair amount of electronic writing: from William Gibson’s Agrippa on, it’s been a field fixated on the idea of the ephemerality of digital text. But the premise of good conceptual art is good ideas, not necessarily formal trickery, and it’s the ideas that Ives is interested in. (At the end of the day, “Agrippa” remains a rather bad poem written by William Gibson; while the concept is fine, the text seems incidental.) The way Anamnesis works is evident from its first stanza:

Suppose we write the sentence, “Paul had a very great mind”
Later we can return, strike through the word “mind” and write “brain”
Later we might add, before the word “had,” the words, “the owner of the restaurant”
We might add, “whose sign is the shape of a sleeping deer”
We could strike this sentence out entire
We could write, “Debt has become the watch word”
We’ll write, “Recommended for you”
But we can cross this out
Write, “My family has three members”
Strike through “has,” write “is”
Strike through “members,” write, “both my mother and father, in the apartment right now”
Strike through “right now,” write, ” in the mornings, noon, and in the evenings”
Strike “both” through
Write, “Lucy was saying that”
Strike the whole sentence

Taking the “we” at face value, we could attempt to follow these instructions, to create a sequence that starts like this:

but already we have problems: which word does whose modify? The restaurant could have a sign in the shape of a sleeping deer; but it’s the personal noun Paul, rather than the restaurant that can be modified by whose. The whose clause can’t be inserted after Paul because the owner of the restaurant gets lost; it can’t be inserted after restaurant or brain because it would appear to modify those words, which would be ungrammatical. A solution would have to go beyond words themselves: but one notes that this is a book that purposefully doesn’t including periods, in an attempt to construct meanings out of words as words, unaided by that particular form of punctuation.

The commands to write and cross out are repeated through the book. The voice in this stanza is interesting: as something of an introduction, this stanza uses “we” in different tenses: “We write”; “We could write”; “We’ll write”. We seems to include both the speaker and the reader, inviting the reader into the text; but the shifting tenses make the relation of the reader to the speaker unclear. These might be mental exercises, à la Wittgenstein (“Suppose we write”); or they might be future plans (“We’ll write”). By the next stanza, “we” has turned to “you”: “You can write”. Unadorned imperative forms with an implied you become the rule: “Write”; “Cross out”. The reader must make his own space in the text, deciding whether these commands apply to him. There are limits to the reader’s power: following the instructions will only go so far. This is a “writerly text,” as Roland Barthes would have said.

I’m not trying to suggest that the reader is excluded from the book: I don’t think that’s the case at all. Rather, the reader is invited to be a part of the process as something is created by writing and effacing. Another electronic project comes to mind: Brad Paley’s CODeDOC, a program which reflexively visualizes itself while being run. The difference between this and Agrippa might be instructive: there’s an economy of means in CODeDOC, in that the code is the poem, rather than being something separate from (and more interesting than) the poem. Ives’s book contains its own mechanism: everything is done with words.

I feel like I might be unjust to the book by drawing these comparisons to electronic writing; other comparisons could as easily, and perhaps more fruitfully, be drawn. To J. L. Austin, of course, to Barthes and Blanchot, through both of them back to Mallarmé. Marjorie Welish’s recent work – I’m thinking of Word Group and Isle of the Signatories  might be another useful point of reference: Welish, with her strong visual sense, is similarly interested in the word on the page and how meanings change without being a concrete poet. And beyond the focus on the process of writing and re-writing, there’s also the problem of how we use writing: as this book moves on, it becomes slowly less imperative and more a consideration of life: of how one does things, thinks about them, records them. This is an important book: I’ll come back to it.