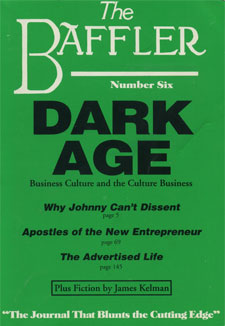 This is the last Baffler I have: I still haven’t seen 1, 2, 3, or 5. Issue 6 is a big one: at 192 pages, it’s thicker than any other issue until the most recent one. The content of this issue seems relatively familiar: I suspect that a lot of this was excerpted or reworked into Frank’s other work. The fourth issue seemed to be a Baffler still in utero, with a nicely amateurish edge; here, the Baffler as everyone remembers emerges, with an enormous “DARK AGE” emblazoned on the cover. Maybe the transition happened in issue 5; there’s a copy of that available on Amazon used for $19.95, which seems a bit hopeful. (Not the most hopeful, however: somebody’s trying to sell a copy of #9 for $89.41, more a tribute to the ridiculousness of the Amazon marketplace for used books than any real rarity or value.)

This is still much more zine than journal: a handful of the ads from the indie labels seem to be entirely hand-written. A handful of the ads have email addresses, some of which end in .edu: it was a different era. But here we see the establishment of the equivalence of post-punk indie rock (of the sort being advertised) and the left, maybe the attitude is remembered most about The Baffler. The Tom Frank essay that bookends the issue examines how the forces of capitalism and what opposes it seem to have set in stone since the 1960s, at least for cultural studies as it existed then:

The two come together in perfect synchronization in a figure like Camille Paglia whose annoying ravings are grounded in the absolutely non-controversial idea of the golden Sixties. According to Paglia, American business is still exactly what it was believed to have been in that beloved decade, that is, ‘puritanical and desensualized.’ Its great opponents are, of course, liberated figures like ‘the beatniks’, Bob Dylan, and the Beatles (needless to say, while Paglia proclaims herself a great fan of rock music, bands like Shellac, Slant 6, and the Subhumans never appear as recipients of her praise). Culture is, quite simply, a binary battle between the repressive Apollonian order of capitalism and the Dionysian impulses of the counterculture. Paglia thus validates the central official myth of the ‘Information Age,’ for rebellion makes no sense without repression; we must remain forever convinced of capitalism’s fundamental hostility to pleasure in order to consume capitalism’s rebel products as avidly as we do. It comes as little surprise when, after criticizing the ‘Apollonian capitalist machine’ in her new book, Paglia applauds American mass culture (in that same random issue of Utne Reader), the pre-eminent product of that ‘capitalist machine,’ as a ‘third great eruption’ of a Dionysian ‘paganism.’ For her, as for most other designated dissidents, there is no contradiction between replaying the standard critique of capitalist conformity and repressiveness and then endorsing its rebel products – for Paglia the car culture and Madonna – as the obvious solution: the Culture Trust offers both Establishment and Resistance in one convenient package. (pp. 15–16)

Paglia was as specious then as now; and her arguments deserve ridicule. Certainly I’m sympathetic to this; I grew up uninterested in the Beatles and Bob Dylan in no small part because of their omnipresence. Young men with guitars and drums can’t really be said to be revolutionary after being dominant for the past half-century. It’s not obvious, however, why indie rock – a slightly different variation on guys with guitars and drums – should be presented as a valid alternative here: why is the post-punk tradition any more ideologically pure than Madonna? Because it was existing outside the corporate tradition, as do-it-yourself culture? Indie rock would be assimilated just as surely as Madonna was; looked at from this distance, it seems more of a signifier of white upper-middle-class culture than anything else. I can’t imagine that anyone became a progressive through listening to Shellac, for all their charms. (See, for instance, a recent interview with Grant Hart of Hüsker Dü where he discusses the non-proletarian origins of their band.) Later Henry Rollins comes in for sustained criticism, in no small part because of how indistinguishable his rhetoric is from business language: a classic sell-out, Rollins is readily merchandisable as a symbol of revolution. One wonders, however, what was really being sold out.

(In the same essay, it’s worth pointing out, my occasional boss turns up, not mentioned by name: the new businessman, Frank writes, “is led by vanguard capitalists like the head of the CD-ROM pioneer Voyager, a former activist whose admiration of the Shining Path, as the New York Times notes, seems somehow appropriate amidst the current ‘information revolution.’ ” (p. 177.) Bob’s business sense and his politics intertwine in a complicated way; he never got rich, though he certainly could have if he’d occasionally set aside his politics. Simply paying lip service to the Shining Path would probably have been more lucrative.)

Elsewhere in the issue, there’s an extremely good piece by Jesse Eisenger examining how business press releases work and are used by the business press. This isn’t flashy writing, but it does examine the history of the business press release (required by law after the 1929 crash) and their current usage. His description of PRNewswire is a great deal more informative than the Wikipedia page on the company; one wonders why more attention isn’t paid to this sort of infrastructure. Later he does a critical reading of the sort of language that’s used in the press release: today, we see this done occasionally in specific cases, but I don’t know that I’ve ever seen a critical eye turned on the systematics of the press release, especially in an extended fashion. This is why I miss the Baffler: there isn’t a great deal of critical literature on the business world that isn’t all-out boosterism. Also fantastic is a piece on Bill Boisvert on business literature:

Whether they steal fire from the Harvard Business School or find enlightenment through a long pilgrimage in Oriental lands, all popular business books share certain idiosyncrasies. They euphemise their tautologies as “common sense” and their lists of slogans as “practical guides”, as if management theories are both self-evidently true and arcane enough to require a hands-on primer and costly seminars. Like nursery rhymes, they are fascinated by numerology and alliteration, freeze-drying their “findings” into nuggets of doggerel like “the Three C’s: Customers, Competition and Change” or Tom Peters’ typically long-winded “Seven S© Framework: Structure, Systems, Style, Staff, Skills, Strategy and Shared Values.” And to make reading fun for executives, they eschew logical exposition and an organized search for evidence in favor of brief, happy anecdotes about take-charge department heads, couched always in the cajoling rhetoric of cereal-box propaganda. (p. 70)

Always I want to see more criticism of the language of business: Doug Henwood’s Left Business Observer soldiers on, but this seems like an obvious subject for a popular blog. Maybe it’s too depressing to be carried out at this sort of length.

Keith White examines Wired, still brand-new: mostly this is what you’d expect, but it’s interesting to note that in 1995, it was still taken for granted that the Internet was a right-wing creation. At a certain point, the popular idea took hold that the internet was essentially a creation of the left-wing (Stewart Brand, etc.) rather than a military/corporate funded endeavor; somebody should trace this history out. It’s interesting as well that Wired was trumpeting video games as the most culturally significant artistic media even back then, claiming that the $6 million the industry was making then was the “single largest component of the infotainment industry,” whatever that means. Also odd to see is Jennifer Gonnerman’s “The Selling of Katie Roife,” a careful examination of the reactionary politics of Roife and how The New York Times tried to make her into a star in the early 1990s. One sees this sort of piece in media gossip circles – tracing out who knows who, and how a front-page-story gets made – but rarely in such depth. It’s also surprising how quickly this sort of thing is forgotten: Roife is still shilling her ill-sourced idiocy on the front of the Book Review. It’s similar to the examination of the creation of Donna Tartt in issue 4; but this one has more political bite.

Ultimately, the Tom Frank essay is what makes this issue. I like the anger, and I can understand where it’s coming from, but I’m not sure exactly where he’s going with it. (Admittedly, at this point, Frank would have been right out of grad school, and it’s maybe too much to ask for answers from someone who’s just been set free of the academy.) The market, the last sentence of the issue declares, is “putting itself beyond our power of imagining because it has become our imagination, it has become our power to envision, and describe, and theorize, and resist” (p. 192). There’s a certain similarity to the injunction of Sven Birkerts at the end of The Gutenberg Elegies to resist: but how? In both cases, one senses that they’re right, but it’s hard to know what to do next.