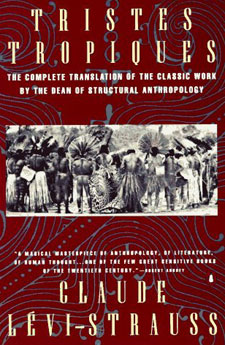 There are books that make one wonder what would have happened if one had read it earlier. What would I have made of this book in high school? There was no one to give it to me then, so this is a rhetorical question. Read then, it might have made me want to run off to be an anthropologist; but I wonder how receptive to the book, or how ready for it, I would have been then. I hadn’t traveled then, which helps to appreciate this book; nor had I read much Surrealist prose, to which this has affinities. Being unversed in anthropology, I can’t really speak to this book’s success or failure as anthropology; but one can’t help but admire this book as part of a continuum that goes back to Nerval’s Aurélia, narratives that try to elude both the reader and the writer.

Start at the beginning. “I hate travelling and explorers” is the famous first line of Lévi-Strauss’s book, though the book the reader continues would appear to be as much about travel and exploration as it is anthropology. This is a book that seems to be running away from itself: not so much in denial, for L&eavutevi-Strauss realizes that one can never run away from oneself, but more in its realization that the writer can never quite escape the text. Similarly, the photograph on the cover of this edition demands scrutiny: cropped, it is an image of a group of natives who seem to have turned their backs to the photographer and us. The back cover only identifies the photographer, René Silz; turning to the book’s “plates,” it turns out to be an image of a Bororo funeral ceremony. The final section of the book, “The Return,” sees Lévi-Strauss move from Brazil (where he observed the last days of the western Bororo people) to Ancient Rome to Martinique to Pakistan to what would become Bangladesh, with digressions to Paris and New York, seemingly in an attempt to throw the reader off any travel narrative that might emerge. Time is uncertain: a reader with a firm grasp of Lévi-Strauss’s biography could pin down exactly when everything in this book happens, but that seems immaterial. Tristes Tropiques is an investigation of loss, both cultural and personal; and Lévi-Strauss realizes that as a Westerner and as an observer he can’t help but be complicit in that loss.

Lévi-Strauss is always acutely aware of his position as an observer, as someone who’s never quite as outside as he wishes he might be. Visiting a newly independent India he notes, for example, how being surrounded with servants makes the served anxious: it’s exactly the same response I had in Delhi a few years ago, which at the time I chalked up to a Midwestern upbringing. Lévi-Strauss points out that this is natural consequence of the relationship. Or again when he looks at the the ever-present problem of dealing with a huge number of people:

India tried to solve the population problem some three thousand years ago by endeavouring, by means of the caste system, to change quantity into quality, that is, to differentiate between human groups so as to enable them to live side by side. . . . It is tragic for mankind that this great experiment failed; I mean that, in the course of history, the various castes did not succeed in reaching a state in which they could remain equal because they were different – equal in the sense that there would have been no common measure between them – and that a harmful element of homogeneity was introduced which made comparison possible, and consequently led to the creation of a hierarchy. Men can coexist on condition that they recognize each other as being all equally, though differently human, but they can also coexist by denying each other a comparable degree of humanity, and thus establishing a system of subordination. (p. 149)

This is an old book now – it’s fifty-five years old – and the world that Lévi-Strauss was describing was vanishing even then, but sections, like this enquiry into the problem of equality, still feel fresh. Parts resonate more strongly now: in a section on the role of the chief in polygamous society, he wanders into the idea of national health care, which he sees as “a return to the fundamental nature of social and political organization”. And here he describes the historical problem of scarcity, which we seem to be confronting now from the opposite direction:

In the old days, people used to risk their lives in India or in the Americas in order to bring back products which now seem to us to have been of comically little worth, such as brasil or brazilwood (from which the name Brazil was derived) – a red dye – and also pepper which had such a vogue in the time of Henry IV of France that courtiers used to carry the seeds in sweetmeat boxes and eat them like sweets. The visual or olfactory surprises they provided, since they were cheerfully warm to the eye or exquisitely hot on the tongue, added a new range of sense experience to a civilization which had never suspected its own insipidity. We might say, then, that, through a twofold reversal, from these same lands our modern Marco Polos now bring back the moral spices of which our society feels an increasing need as it is conscious of sinking futher into boredom, but that this time they take the form of photographs, books and travellers’ tales. (p.38)

I like the turn that Lévi-Strauss executes in this paragraph: moving from the colonies back to the colonizers, and their own self-recognition, which they almost certainly wouldn’t have stated in the same words. And then to bring it further: to see the same impulse in ourselves, the readers of travel books, including this travel book. We are not exempt: but how do we value scarcity now, when we are deluged with “photographs, books and travellers’ tales”?

Writing itself comes into question: in an extended section, he wonders what writing historically does to people. This isn’t the restatement of Socrates’ position in the Phaedrus, as one might expect. Rather:

The only phenomenon with which writing has always been concomitant is the creation of cities and empires, that is the integration of large numbers of individuals into a political system, and their grading into castes or classes. Such, as any rate, is the typical pattern of development to be observed from Egypt to China, at the time when writing first emerged: it seems to have favoured the exploitation of human beings rather than their enlightenment. This exploitation, which made it possible to assemble thousands of workers and force them to carry out exhausting tasks, is a much more likely explanation of the birth of architecture than the direct link referred to above. My hypothesis, if correct, would oblige us to recognize the fact that the primary function of written communication is to facilitate slavery. The use of writing for disinterested purposes, and as a source of intellectual and aesthetic pleasure, is a secondary result, and more often than not it may even be turned into a means of strengthening, justifying or concealing the other. (p. 299)

This is an astonishing argument, and one that I haven’t seen resurrected in all the present talk about what’s happening to reading and writing in their present explosions. It’s an argument that could be cogently made today: I’d rather see someone arguing from this inflammatory position than from the tired old position that all reading is good reading. Perhaps it’s only an argument that can be buried in a book like this.

Tristes Tropiques is a valedictory book: Lévi-Strauss saw the world disappearing around him. It’s odd to read this book, originally published in 1955, and to realize that Lévi-Strauss would live longer after having written it than he would before: one senses that he never expected that.