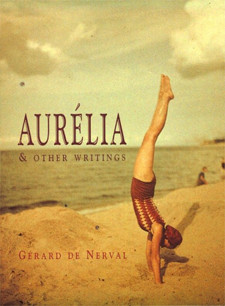 I first read Nerval about ten years ago in the Richard Sieburth edition from Penguin; I was on my way to reading Proust, and “Sylvie” is a natural stop along that way. I like the Sieburth Nerval; but one wonders what other Nervals might sound like. The Exact Change book is one that I’m constantly picking up in bookstores – one always hopes that by mistake one might discover something new in the Nerval section – but despite its splendid cover and my general love of Exact Change, I’ve always put it back in favor of something else: too many books to read. A few years ago I did find the Kendall Lapin translation of “Aurélia” and “Sylvie”; I didn’t like Lapin’s versions of these as much as I remembered liking Sieburth’s. But finally I actually bought the Exact Change edition.

The Nerval that emerges here isn’t quite the same as Sieburth’s Nerval, even though there’s a fair amount of overlap in what the two books include. Both include “Aurélia,” “Sylvie,” “Octavie,” “Pandora,” and versions of “The Chimeras”. The Exact Change edition adds “Isis” and “Walks & Memories”. Eight pieces in the Sieburth edition aren’t in the Exact Change. There’s a fair amount of Nerval that doesn’t exist in English: a Selected Writings translated by Wagner adds “Emilie” to “Aueélia” and “Sylvia,” and a couple of smaller books have appeared over the years, but the Penguin edition remains the most comprehensive collection of his work in English. That book roughly follows the course of his life, with a little of everything – making me wish for something more comprehensive – concluding with “Aurélia” and a coda of the poetry, presented in French with an English crib. The Exact Change edition starts with “Aurélia” – Nerval’s memoir of his madness, ostensibly his last piece of writing – and then proceeds through the stories and “The Chimeras” (here in facing-page unrhymed translation by Robert Duncan) before finishing with another autobiographical piece from near the end of his life, “Walks & Memories”. The narrative that emerges is an autobiographical one: the names that Nerval uses for the overlapping loves in his life – Aurélia, Sylvie, Adrienne – bounce across pieces that are explicitly fictional and those that are not. Notes suggest how the fictional pieces were based on his life and how the non-fictional play with the verifiable truth.

This Nerval is the Nerval loved by the Surrealists – it feels particularly like a precursor of Michel Leiris’s Aurora. There’s an obvious power in narratives of madness; but somehow I don’t like this Nerval as much as I remember liking the Sieburth Nerval. Maybe it’s that madness no longer seems as romantic as it once did: Aurélia no longer speaks to me as much as it once did. It’s as much, though, that this feels like a conflation of the authorial persona with the person of the author: too much a history of the different facets of one man’s work, unified by madness. It’s useful, perhaps, to know that Aurélia was Jenny Colon, minor star of the stage, but I don’t know what this really tells us about Nerval’s work, save that he was obsessed. From Sieburth’s introduction to his collection:

Catering to a readership increasingly eager to enter into the intimacy of its favorite writers – as Coleridge grumbled, literature had now entered into ‘the age of personality’ – Nerval discovered there was no deeper resource of fiction, no more powerful strategy of illusion than the autobiographical ‘I’. If he therefore adopted the first person in virtually all of his texts, it was paradoxically the better to guarantee his invisibility. Late in life, having come across a lithograph portrait of himself in a recently published biography, he inscribed the frontispiece with the enigmatic phrase ‘Je suis l’autre’ (‘I am the other’). It is perhaps a caveat addressed to any potential reader of his work: beware of mistaking me for myself. (p. ix)

To make Nerval autobiographical seems a misstep: especially as these pieces seem to be profoundly self-contained. When not presented as one stop on a man’s trip to the grave, “Sylvie” still seems perfect to me, prefiguring the wistful pastoral of Le Grand Meaulnes. Proust was glad that Sainte-Beuve hated it, and wished that the dream-logic of the story could remain his own private secret. Proust recognizes himself in the story:

. . . what we have here is one of those rainbow-painted pictures, never to be seen in real life, or even called up by words, but sometimes brought before us in a dream or called up by music. Sometimes in the moment of falling asleep we see them, and try to seize and define them. Then we wake up and they are gone, we give up the pursuit, and before we can be sure of their nature we are asleep again as though the sight of them were forbidden to the waking mind. (pp. 110–111 in Sylvia Townsend Warner’s translation)

There’s a universalism here that still works, but it’s harder to get at this when it immediately follows “Aurélia”; the reader can’t help but notice that Nerval is still talking about Jenny Colon in the first section of “Sylvie,” and the temptation is to continue reading the story in this fashion. We read “Sylvie,” of course, knowing that the one who wrote this would write “Aurélia” and kill himself; but in “Sylvie” this is held at bay, something the reader knows but doesn’t want to apply to the text. We know that the pastoral must end, as does the narrator of the piece; but we want to believe that it doesn’t have to be that way.

Any Nerval is welcome, of course, and I feel like I shouldn’t be so hard on the presentation of this book. Wagner’s translations of “Sylvie” and “Aurélia” don’t seem quite as fluid as Sieburth’s; it’s those that I’ll return to, I suspect. But it’s fitting, perhaps, that one should seek to return to one’s first Nerval.