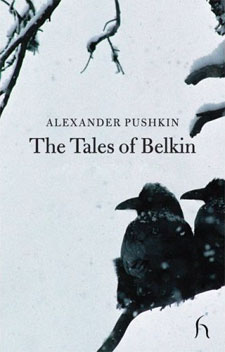 My knowledge of nineteenth-century Russians is embarrassingly bad: most of Dostoyevsky, a reasonable amount of Tolstoy, Oblomov, some Chekhov, a handful of others. Eugene Onegin, in a translation that I’m sure is lacking in some way, is sitting on the shelf yet unread, awaiting a project. In the mean time, here’s Pushkin’s The Tales of Belkin, a collection of early short stories. The book belongs to that familiar subject: how people in the provinces live who have gain their knowledge of the outside world through books. A problem invariably arises: how can a literate and knowing narrator tell their stories from within? A variety of frames of narration are constructed around the stories to permit this: as much as anything, The Tales of Belkin is an investigation of how storytelling works.

The central image of “The Shot” is a painting with two shots fired through it. The narrator marvels at the closeness of the shots; the second turns out to be the work of Silvio, an officer the narrator once knew, and is the occasion for the telling of the story of how those shots came to be there. In a duel, the painting was shot the first time by accident; the second time, it was not an accident, but rather a demonstration by Silvio of how he could kill if he chose to do so. The painting is the occasion for the telling of the story: the narrator meets both parties of the duel, but separately, and if he had not remarked upon the two shots in the painting, he would never have been able to put the two parts of the story together. The painting is thus a plot device; the content (described offhandedly as “some scene from Switzerland”) is not important, but its existence is, because without it the story couldn’t be told. Coincidence makes the story possible; it grabs the reader’s attention, but coincidence by itself is not enough to serve as a plot. It maneuvers the narrator into place so that he can tell the two halves of the story of Silvio; but coincidence in fiction is a very different thing from coincidence in life. The narrator comes off, as he must, as blithely oblivious of the forces moving him about.

This is complicated by layers of narration: “The Shot” is told in the first person by a narrator, who we learn in a quoted letter in the publisher’s note which serves as introduction, is “Lieutenant-Colonel I.L.P.” who ostensibly told it to Ivan Belkin, who wrote down the story; Pushkin (if we may assume that Pushkin is the “A.P.” of the publisher’s note) ostensibly only edited these stories into a volume. We have then a story retold several times; presumably it merited retelling because of its use of coincidence. Coincidence grabs a listener; does it grab a reader in the same way? It’s worth looking back at the twice-shot Swiss landscape: it might be taken as a representation of realism, what the artist sees in nature. What makes interesting fiction isn’t realism: the painting only appears in the story because of the bullet holes the author added to it.

Coincidence also features heavily in the next story, “The Blizzard”; here, we are told the story of a girl who “had been raised on French novels, and consequently was in love”. A secret marriage is arranged; a blizzard fortuitously arrives, and the marriage doesn’t happen. Years pass, a second suitor turns up, the girl sits in the garden “like a true heroine from a novel”. Rousseau’s Julie is imagined. The new suitor turns out to be known to the girl; earlier gaps in the narrative are explained. Re-reading the story, the reader sees how the author has carefully left out events to build suspense, which is held when the story ends, unresolved. With this story, what Pushkin is doing becomes more clear: this is a systematic investigation of how fiction works and what can be believed. The reader is advised of this again near the start of “The Undertaker”:

The enlightened reader is aware that Shakespeare and Walter Scott both represented their gravediggers as cheerful and humorous people so as to strike our imaginations the more powerfully with this contrast. Out of respect for the truth, we cannot follow their example and are forced to admit that our undertaker’s disposition corresponded perfectly to his sombre trade. (p. 31)

This is straight-up metafiction; the first person plural of the narrator suggests the unreliability of the multiple narrators behind this: unreliable in the sense that we know full well that they are twisting the truth to suit narrative needs. When the reader then finds the titular undertaker confronted by his late charges, we don’t know if this is a tale of the supernatural – as we know the narrator is unafraid to play with reality – or if it’s all a drunken dream, as it turns out to be. In his forward, Adam Thirlwell presents Pushkin’s work is an analogue to Sterne’s, an unacknowledged elaboration on a passage in Shklovsky’s Theory of Prose; I think the Tales of Belkin suffer in this comparison, but one senses that these stories are intended to be slight. They’re still pleasant. The other material tacked on to the end of the book – two fragments that Pushkin wrote in the voice of Belkin – feel extraneous.

I like how Hesperus Classics look: I like that they’re marketing small books, and they tend to pick up things that other’s don’t. That said: there’s a lot of marketing evident on this book. Adam Thirlwell’s name appears as many times as Pushkin’s on the covers; Hugh Aplin, the translator, is nowhere to be found, though he also contributes a useful historical introduction. Maybe Thirlwell’s name goes further in Britain than it does here. And I presume Pushkin won’t sell himself. The cover – crows on a snowy landscape – has a solemnity that suggests that the designer never read the book. Aplin’s translation is unobtrusive, though this isn’t the case with his annotations: they are necessary because of Pushkin’s heavy use of references, but generally not particularly revealing.