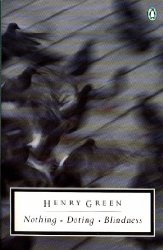 I’ve been slowly working my way through Henry Green – slowly here partly because I want it to last, and partly because I’ve been slowing my reading down this past year. Doting is Green’s last full novel, but the middle of Penguin’s second omnibus, now seemingly out of print. It’s odd that Living / Loving / Party Going seem to be the Green novels that everyone reads; Dalkey Archive keeps most of the rest in print, but they don’t seem to sell nearly as well as the Penguin Classics; there’s an order of magnitude of difference in the Amazon sales rankings. Does a John Updike introduction really get you that far? Blindness is clearly juvenilia, but Nothing and Doting are as funny and well-plotted as anything in Living / Loving / Party Going. Maybe it’s just that American readers are suspicious of small novels.

Doting follows on from Nothing: like that book, it might be described as a romantic comedy composed of a series of scenes set between two characters. It’s a light subject – and it’s a book that can be read quickly – but not without an undercurrent of sadness that comes out from time to time. The book begins with the middle-aged Arthur and Diana Middleton out for a celebratory dinner at a nightclub with their son Peter, who’s home in London on vacation from boarding school, along with Annabel Paynton, a few years older than Peter and the only daughter of friends of the Middletons (who remain only a threat for the duration of the novel). What she’s doing there isn’t entirely clear to the reader: while she’s almost the same age as Peter, she seems much more interested in his parents, and Arthur, though he has known her since she was a child, is suddenly interested in her.

The stage is set for a rectangle of relationships; but Peter is soon shoved aside, being sent off to Scotland, and replaced by Charles Addinsell, Arthur’s best friend. (The names, it should go without saying, bear inspection: the Middletons are set up as being a very ordinary couple, Ann functions as a pain in their marriage. “Addinsell” suggests math and business; he’s substituted into a zero-sum game.) Arthur falls for Ann, and starts taking her out to lunch; she is happy to have lunch bought for her & tells her friend Claire that she’s interested in older men. Diana catches Arthur and Claire in a compromising situation when she’s supposed to be going to Scotland with Peter; she goes to confide in Charles and begins an affair of her own with him, although nothing is consummated, to the chagrin of Charles. Ann, jealous of Diana’s place, suggests to Arthur that Diana is having an affair with Charles; this does not displace Arthur but draws him back to Diana, who then tries to pass off Ann on Charles. This succeeds; Arthur then finds himself jealous again, as does Diana. Things carry on: Diana tries to split up Charles and Ann by introducing Charles to Ann’s friend Claire. This set-up works: and by the time the novel closes, with the original foursome back at another nightclub for a last dinner before Peter returns to school, the reader has the sense that everything has returned itself to the original state. Except not quite.

As one might expect, there’s a fair amount of lying in this book, which becomes rather convoluted. Here Arthur is trying to find out if Diana has told Charles anything about what she saw when she caught him with Ann:

“. . . . But she hasn’t said a word?”
“She wouldn’t, Diana couldn’t,” his guest lied in a flat voice. “Her loyalty’s like an oyster, and you’d cut yourself if you tried to open it with an opener.”
“Yet there are men who deal with dozens a minute out of a barrel.”
“Oh,” Mr Addinsell objected, “then, I imagine, they’ve all got their cards, are members of the Union. Any pearls they may find have to go to the credit of the Benefit Fund.” (p. 249)

There are several layers at work here: first, of course, Charles is lying in his response to Arthur’s question, because Diana has said something to him: Diana told Charles that she found Arthur in bed with Ann. Arthur previously told Charles what actually happened – Ann was trying to get a coffee stain out of her skirt, though they had been kissing – so Charles knows that one of them must be lying; as he knows them well, he probably knows that it’s Diana. But there’s also indirection in Charles’s answer: he doesn’t give Charles a flat-out yes or no – Arthur’s question, formulated in the negative, resists such an answer – rather, Charles falls back on generalizations about how Diana’s behavior, which he knows to be false. On another level, though, Diana is loyal: for a comedy based on the threat of adultery, no adultery actually takes place, though there’s every opportunity for it. Rather, Arthur and Diana’s marriage appears to be incredibly stable, like Charles’s oyster: they do appear to genuinely love each other.

Have things returned to normal at the end of this book? Charles, who seems like the force most likely to destabilize the Middleton’s marriage, has been taken out of play with the conveniently available Claire. In the final scene, the foursome has become six, joined by Charles and Claire; but there’s the sense of a lack of closure. The object of Ann’s affection may have moved on from Arthur, though it’s unclear that Arthur is entirely over his infatuation with her; and Diana still seems to feel pangs of jealousy watching Charles and Claire. Peter has been promised wrestling at the nightclub; the wrestlers never arrive:

“. . . . Well, you know, Di, I’m wondering if there is to be any tonight, when all’s said and done.”
“Oh no, Arthur! After you promised those wrestlers to Peter?”
“But if they are to show up, they’re being a bit slow about it, surely?”
“In any case, he can’t have anything. Now should he, Charles?” the mother said, using a suddenly bored voice.
“Got to learn to go without,” Mr Addinsell agreed. (p. 332)

And here (a few page later) the book ends: the situation is unresolvable, but it must be resolved; life has to continue.

One thought on “henry green, “doting””