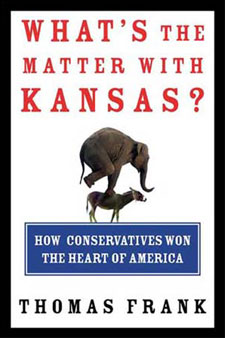 Thomas Frank
What’s the Matter with Kansas? How Conservatives Won the Heart of America
(Metropolitan Books, 2004)

Our building has bookshelves down in the laundry room in the basement, and among the books was this one, which I didn’t read when it came out, in no small part because I was deeply depressed by where the country was going – 2004, it doesn’t need to be said, was a bad year – & I was afraid of sinking deeper into that. I was familiar with Frank’s argument, of course, from his writing in The Baffler; he was right, I thought, but to me he’d be preaching to the choir. So I put off reading the book, assuming that a copy would show up sooner or later: now one has. (Similarly, I have assumed for most of the past decade that sooner or later I will wind up staying the weekend in a house with a copy of Jeffrey Eugenides’s Middlesex, upon which point I will read that book; that has not happened yet.)

I am in Champaign-Urbana for work, a place that I have not been, as far as I remember, for fifteen years. One finds, browsing the local paper, that the mayor of Champaign just announced at a Tea Party rally that he doesn’t believe the President was born in this country; local residents write letters for and against. It’s not entirely surprising, as Champaign was never the Madison of Illinois, but it’s still a touch disappointing. Champaign was mildly exciting in my youth; now it seems like a college town, with the same shops and chain-story eateries as any other college town, plus a couple of sad and decrepit non-chains. It’s hard to know if the town’s changed or if I’ve changed: probably both, but I don’t remember things feeling quite so generic the last time I was here. Would I have been excited by a Panera Bread in high school? Caribou Coffees? Probably not, though it’s hard to know.

This is by way of saying that I do have something of a personal stake in Frank’s book, being very much someone shaped by the middle of the country, anguished and distanced as that relationship might be. The landscape where I grew up in looked almost identical to where I am now (though of course it didn’t have the benefit of a major state university). And there’s a similarity to the Kansas that Frank describes in this book: it’s the same sort of country with the same sort of people, mutatis mutandis.

There are sober, sociological explanations for Kansas’s penchant for martyrdom . . . . I personally prefer the more romantic notion that the extremity of the land itself accounts for the bumper crops of martyrdom-minded folks that Kansas so reliably produces. Most of the state is an empty place, a featureless landscape capable of quickly convincing anyone of their own cosmic insignificance. For this reason it has often been compared to the Holy Land, where a similarly blank vista generated an endless stream of prophets who descended on the cities to preach “world-worthlessness,” as T. E. Lawrence once summarized the creed of the desert: “bareness, renunciation, poverty.” (p. 215)

There’s an odd, if not necessarily surprising, similarity between this book and Harold Bloom’s The American Religion, the book in which Bloom inspects the history of American Christianity – particularly the evangelical movements and Mormonism – and comes to the conclusion that American Christianity is fundamentally gnostic in character, in the sense that it’s fixated on declaring the real world as an error which must be destroyed to achieve the kingdom of God. Gnostics, for Bloom, are revolutionary; he seems chagrined in that he’d like to see himself as likewise being a Gnostic but doesn’t like his bedfellows. This is also the book, written in the early nineties, where Bloom despairs of ever seeing a Democratic president again in his lifetime; reading it in the late nineties, it was easy to sneer at that, but now I wonder if he wasn’t right.

Frank’s thesis is familiar right now, and it still seems operational. The players have changed slightly in the six years since this book, of course: Ann Coulter’s inanities have been replaced by those of Glenn Beck; George Tiller was murdered, as everyone must have known would happen. Sam Brownback is leaving Washington for Kansas to run for governor. David Brooks is still an idiot. Frank divides Kansan Republicans into “Mods” (the traditional upper class Republicans, now presumably being damned as RINOS à la Charlie Crist) and “Cons” (the conservative rabble-rousers): it’s easy to forget when surveying the doings of the Cons that what the Mods were up to wasn’t, in the end, that much better; with the Democrats moving further and further to the right, we see this playing out on a national scale.

What’s most valuable about Frank’s work, I think, is how he points out that economic arguments have largely been driven out of American political life: we argue endlessly (ceremonially, almost) about taxes, but nobody says anything about class. This is a problem, of course, because class exists whether or not we acknowledge it. At the heart of Frank’s book is a core of autobiography: growing up as a Young Republican in the affluent Kansas City suburbs, he’s generally unaware of class until he arrives at university and is confronted with those much wealthier. It’s a familiar enough story, though not one that’s usually talked about: Frank moved to the left when confronted with the upper class (as did I), though that’s not the usual response. Frank, to his credit, stayed engaged, despite moving to Chicago and then D.C.; I left. Real life happens elsewhere; there’s not a lot of future to be found in the rural Midwest. But Frank can still talk to Kansans, and there’s value in that: he can make sense of those who might be written off as lunatics. But as much of the problem that he’s pointing out is one of discourse: what we talk about and what we don’t talk about.

One thought on “thomas frank, “what’s the matter with kansas?””