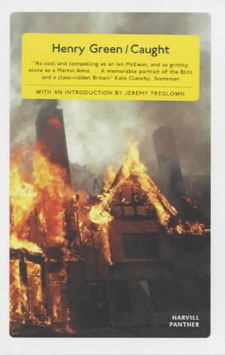 Caught seems to be the odd one out of Green’s books: it’s the only one that’s out of print in the United States. Berkley Medallion published a paperback in 1960 available on Amazon for wildly inflated prices; since then, as far as I can tell, potential readers have had to have recourse to the British edition. It’s also, and perhaps relatedly, the only book of Green’s that John Updike didn’t like, as he admits in his introduction to Loving/Living/Party Going. But the strangeness of the book really starts with the title: Caught is a verb, like most of Green’s other titles, but it’s in the past tense, not a gerund. Green’s other books describe how things are; this one describes how things were. Caught depicts a specific point in time – the Blitz in London – and was published soon afterwards (1943). There’s a documentary character to this book that isn’t in Green’s other novels; it feels much more like Pack My Bag, Green’s memoir of his youth than Loving, which followed two years later (and which is also set during World War II). Most of all, it’s not comic: there are comic elements, of course, but this is a much more serious book.

Caught describes the lives of firefighters in London at the start of World War II as they wait for the bombing of London to begin. It’s an exceptional state: no one behaves as they normally would, and no one is quite sure what the new rules are or how long this will last. The characters hang suspended: they are doing what they know is dangerous work; indeed, at the end of the book, a number of them are dead. The lives that they are living are unsustainable; the book ends with a coda where we learn that the central character, Richard Roe, has been sent home:

Some months later, after nine months of air raids on London, Roe was unlucky one morning. A bomb came too close. It knocked him out. He was sent home, superficially uninjured. They called it nervous debility. (p. 173)

The nine months of air raids on London fall into the eight blank lines above the beginning this section: they’re not described directly, though Roe haltingly attempts to describe them to his sister-in-law. But the disaster is not written about directly: preparations for it fill most of the book, and its repercussions finish the book. What happened can’t be described directly; maybe it’s something that can’t be explained. Green, it should be said, was a firefighter in London during the war; like Roe, he would have been upper class and somewhat out of place, but how closely Roe’s life corresponds to his, I don’t know. This is a book written in the middle of WWII; the grand narrative that came out of that war (of good defeating evil) had not yet been constructed, and whether the actions of the firemen in London were brave or delusional hadn’t yet entirely been defined. Roe attempts to explain what happens to his sister-in-law:

“The first night,” he said, “we were ordered to the docks. As we came over Westminster Bridge it was fantastic, the whole of the left side of London seemed to be alight.”
(It had not been like that at all. As they went, not hurrying, but steadily towards the river, the sky in that quarter, which happened to be the east, beginning at the bottom of streets until it spread over the nearest houses, was flooded in a second sunset, orange and rose, turning the pavements pink. Civilians hastened by twos or threes, hushed below the stupendous pall of defeat until, in the business quarter, the streets were deserted.) (p. 177)

Two more paragraphs encircled in parentheses follow, describing what happened from an omniscient point of view. Roe at this point has not entirely regained his language: he struggles to explain something that made an immense impression on him, but largely fails, and his sister-in-law remains uncomprehending. But the omniscient narrator’s point of view is curious and worth scrutinizing. Roe describes what he saw from his perspective (“the left side of London”); the narrator’s description is not so much more objective but more artful. Detachment seems to be necessary to attain this artfulness; a beautiful description, coming from Roe, would seem callow, as he’s describing a situation in which his fellow firefighters – “friends” doesn’t really work, as Green’s books are always attuned to class distinctions – are going to be killed.

These parentheses have appeared before in the book, more mystifyingly, at the beginning. Roe is second-in-command to Pye, an older trade-unionist; Pye lives with his elderly sister, who is not quite right in the head. Pye’s sister, wanting a child, kidnaps Roe’s son Christopher; the situation is soon sorted out, but it necessarily complicates the already fraught relationship between Pye and Roe; Pye’s sister is sent to an asylum, and Christopher is sent to the country. Roe attempts to reconstruct what must have happened, but fails; the two primary participants, a child and an insane woman, can’t explain what happened. Parenthetical paragraphs serve to do this; we are dragged outside of the character’s point of view so that we can understand what happened.

Christopher figures only in the fringes of this book, but he’s especially well done as a character. He’s decidedly not romanticized:

Christopher was like any other child of his age, not very interested or interesting, strident with health. He enjoyed teasing and was careful no one should know what he felt. (1)

This is perfect: when such a description appears on the first page of the book, you know it’s worth reading. It’s not altogether unexpected – but still shocking – when we near the end of the book Christopher has this interaction with his father in the country:

“Look,” his father interrupted, “haven’t you knocked those branches about enough? There’s hardly a bird left in the garden since you’ve been out. You’d do better to put food for them. They starve in this weather you know.”
“They’re Polish people,” Christopher said, “and I’m a German policeman, rootling them about.”
“Well, if that’s so, hadn’t you better carry on the good work where it’s drier? Why not go back to the stables and see if you can’t kill some more mice with a spoon? You could think they were Czechs,” his father said.
“Oh thanks, I say. That’s a lovely idea,” and he ran off, stumbling in the snow, diminutive. (p. 190)

Children are more terrible than they know; but there’s a realism to this description.

This is necessarily a solemn book; and the effect from reading it is different from any of the other books by Green. It’s not my favorite of his work; I wonder if it would be anybody’s, just because his other novels are so powerful. But it’s not the worst of his books: Blindness is clearly juvenilia and suffers in comparison to the rest.