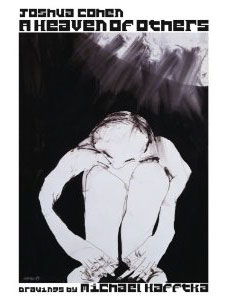 Joshua Cohen
A Heaven of Others
(drawings by Michael Hafftka)
(Starcherone Books, 2007)

The premise of this book is carried in its subtitle: “Being the True Account of a Jewish Boy Jonathan Schwarzstein of Tchernichovsky Street, Jerusalem, and his Post-Mortem Adventures in & Reflections on the Muslim Heaven as Said to Me and Said Through Me by an Angel of the One True God, Revealed to Me at Night as if in a Dream.” Like Cadenza for the Schneidermann Violin Concerto it is composed of a long monologue (albeit one with section breaks this time); Jonathan Schwarzstein speaks in the first person, so the “me” of the subtitle might be the author himself: one thinks of how Joseph Smith is given a translation credit on The Book of Mormon.

The book most readily brought to mind by this fictional exploration of Heaven is Stanley Elkin’s The Living End (1979): Ellerbee, Elkin’s virtuous everyman, is sent to Hell after he is killed in a hold-up of his liquor store by a literal-minded God for, among other offenses, keeping his store open on Sundays. God is getting tired, as he explains to Ladlehaus, one of Ellerbee’s killers:

I’m Himself Himself and I don’t know how I do it. I don’t even remember making this place. There must have been a need for it because everything fits together and I’ve always been a form-follows-function sort of God, but sometimes even I get confused about the details. (p. 54)

He goes on to brag that Ladlehaus would go blind even trying on His contact lenses. While it’s left unclear if Elkin’s characters are Jewish (as was, of course, their author), the afterlife they end up in is the Christian one of popular mythology: St. Peter waits at the gates of Heaven, there’s no Purgatory. It’s clear what sort of universe Elkin’s is: one battered down by neglect and incompetance; it might be run by Communist bureaucrats. (God is once described as having an Iron Curtain around him.) The Living End is, I should make clear, an immensely funny book. Cohen’s, by contrast, starts from the same lack of definition of the Jewish Heaven, but turns into a corporatist nightmare Hugging the young Muslim suicide bomber who kills him, Jonathan ends up in the Muslim heaven; no redress of the mistake is possible. The influences of Beckett (the trilogy) and perhaps even more Kafka (the blind fixation on justice in “In the Penal Colony”) are here, inescapably: while this is a cosmology without meaning, the structures linger on, not unlike Nike co-opting Gary Gilmore’s “Just do it” into advertising for sneakers.

Like Schneidermann, this is an extended monologue; however, this one is less directly indebted to Bernhard. This book is broken into sections; three short poems (“Alef,” “Beit,” and “Alef” again) further subdivide the text. That isn’t to say that the breathless quality of Schneidermann isn’t here: a child is telling this story, and the rhythm varies from short, fragmentary sentences to extended, redoubling ones; the final section, titled “A ‘Metaphor’,” is a single 16-page sentence. Something odd is going on with capitalization: take this, for example, excerpted from a much longer sentence, where Jonathan recalls his father talking about cancer:

. . . he said it was A big black bumpishness that just grew larger or rather filled you largely despite what the doctors would empty, which despite the nail of any needle would never be enough to empty It all – Aba himself never went to doctors, he went to the Queen, by which I mean my first one and only his second – and so this Queen, that former Queen whom I never knew her neither her name even she was blackened as if burned like a bush once consumed . . . (pp. 126–7.)

The words capitalized in the middle of sentence (as “A” and “It” in the example above) recur throughout the book; in the sections with extended sentences they seem to function almost as pauses for breath, or the way linebreaks function in a poem. (The first one in this quotation also has a slightly different function, signaling the opening of a quotation.) This book could probably have worked as a narrative poem: as in Schneidermann, the language is very much oral, and the rhythms of this book demand that it be read aloud. But there is a pronounced bookishness to this, which the capitalized letters bring out: capital letters don’t exist in spoken language, or, for that matter, in Hebrew; they are a part of written language, that of the scribe writing this book.

Something should also be said about the form of this book: most prominently, it features spidery, blotchy pen and ink drawings by Michael Hafftka, generally illustrative of what’s happening in the text at that point in time. I don’t love these; but they are of a piece with the tone of the text, and it’s a good match. It’s nice to see an illustrated book, though I don’t know that they add much to the text. I find myself a bit vexed by the book design (also by Hafftka): the body text is set in a slab serif, which complicates reading. Perhaps this was chosen because the darkness of the letterforms look like Hebrew (as is the case with the display type); to me, it gets in the way of the text and seems too showy.

The death of David Markson makes me think of the apocryphal story that Samuel Beckett was a friend of the parents of André the Giant and would drive the young André to school. One wonders what stories Beckett would have entertained a child with; maybe something like this.

4 thoughts on “joshua cohen, “a heaven of others””