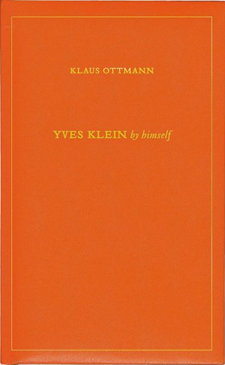 Klaus Ottmann compiled the collected writings of Yves Klein ( Overcoming the Problematics of Art (2007), which I have not read); this book is a refraction of those writings and others to form a sort of biography of Klein. Ottmann points out as his model Coleridge’s Biographia Literaria (the same text that Dick Higgins would declare the source of intermedia: something of a magpie, Klein tended to cut and paste from his sources much as Coleridge did, and Ottmann accordingly takes the same approach in this book. Klein’s life was of course very short; but he found his art through a bewilderingly diverse set of sources. Ottmann’s method allows him to scrutinize Klein from a number of directions.

Ottmann sees Klein as a conceptualist; perhaps in accordance with this, this book is not illustrated so that it can concentrate on Klein’s words, which might be his real work. Klein: “My monochrome canvases are not my definitive works but the preparation for my works; the are the remains of the creative process, the ashes” (p. 67). Klein worked in the tradition of Duchamp:

Throughout his writing, Klein refers to the viewer or observer of art as lecteur (reader) perhaps in allusion to Marcel Duchamp’s well-known declaration that “it is the observer who makes the painting” (c’est le regardeur qui gait le tableau). While for Duchamp the work becomes activated by the observer, the lecteur of Klein’s paintings literally absorbs the sensibility of pure color like a sponge. (p. 14)

Ottmann argues that Klein was to French painting as Robbe-Grillet was to the French novel (Pour un Nouveau Roman was published the year of Klein’s death). But Klein appears to have bricolaged his philosophical apparatus from all over the place. Some sources are obvious (the influence of Gaston Bachelard, for example); others are less so, but correspondences can be drawn through these disparate sources. It’s surprising to find out, for example, that Klein was a practicing Catholic. The idea of Klein as Christian is odd: but among his writings are a number of prayers addressed to St. Rita of Cascia. Not that he was especially orthodox: Klein prayed to St. Rita that his work would establish him

without my having a hand in it – as the official head of France with the approval of all. Above all, may it come about peacefully, withou bloodshed or civil commotion. One day, I would like to be in this position, without anyone complaining about it. (p. 89)

The picture that emerges is Klein as a feeling man – not quite an intellectual, not quite an artisan – who understood things through a variety of approaches (judo, Christianity, Rosicrucianism). One sees why he might have been so distressed – to the point of death – at his being held up to ridicule in Mondo Cane.

Klein was very serious about judo, having gone to Tokyo to study it when that was still a strange thing to do. Klein seems, however, to have been disinterested in the mystical aspects of judo; he liked it as “the sport of the sportsman, the passion and emotion that modern intellectuals despise” (p. 129). His book about the sport might be seen as an analogue to Duchamp’s about chess, though Klein’s infatuation with judo was before his major artistic work, rather than after: Klein effectively gave up judo for art. But correspondences might be seen; for example, in the way that Klein explains the body in judo:

Our physical body consists of a skeleton and flesh. Inside the bones, the marrow circulates, a substance made of stuff nearly identical to that of the brain. The bones are the lines of the body. The line is intellect, reason, academicism, flesh, passion, all that was created by the intellect after man’s fall, the original sin, and it is what supports all, without which nothing would be living. Spirit, pure sensibility, life itself in man is apart from all that, although it is tied to the physical and emotional. (p. 133)

Later, in “My Position in the Battle between Line and Color,” Klein finds lines to work in much the same terms:

Ordinary painting, painting as it is commonly understood, is a prison window whose lines, contours, forms, and composition are all determined by bars. The lines concretize our morality, our emotional life, our reason, and even our spirituality. They are our psychological boundaries, our historic past, our skeletal framework; they are our weaknesses and our desires, our faculties, and our contrivances.
Color, on the other hand, is the natural and human measure; it bathes in a cosmic sensibility. (p. 53)

Or back to religion:

In the final analysis, the line can only suggest; whereas color “is”.
It is a presence already in itself that can be charged by the artist with a particular life, bringing its presence within reach of the human sensibility.
The scenes of the life of Jesus described in the Gospels vividly strike our senses and touch us almost physically; more than a narrative account, more than a representation, they are a presence. Although no color is named and neither face nor landscape described, we are constantly face to face and one on one with them. (pp. 151–3.)

There’s a unity of thought here, of a sort: while Klein is anything but systematic, it’s an appealing sensibility. Yves Klein by Himself selects and edits Klein’s words; certainly it’s not the only picture of Klein that could have been drawn (there is, one notes, no mention of the market and Klein’s relationship to it and little attention is paid to Klein’s architecture) it’s as good an introduction to an artist’s thought as I’ve seen recently.

This is also, it needs to be said, a beautiful book. The cover is a bright orange; when stared at against a white background, the viewer is left with an afterimage that might approximate International Klein Blue. There are plenty of blue books about Klein: it’s nice to see one that’s different. The book is hardcover; the page edges are gilt; there’s a bookmark. It’s a lovely object, and I’m a bit surprised that Éditions Dilecta, a French company, can be selling it in this country for only $29. The interiors, though, are what stand out: text appears on the recto pages, while notes appear on the versos. It’s a beautifully designed book; more importantly, it’s readable in a way that isn’t automatic.

One thought on “klaus ottmann, “yves klein by himself””