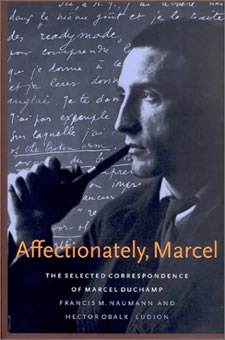 Naumann & Obalk’s edition of Duchamp’s correspondence presents a selection of Duchamp’s letters presented chronologically. What one notices most about these letters – especially if you start at the beginning & read right through, as I did – is how workaday they are. Duchamp is not, for the most part, sharing his ideas with his correspondents. None are exceptionally long; most are brief records of what he’s been up to, detailing his travels, financial dealings (many of these), and of course his work attempting to sell art for his friends. One gets the weird sense of Duchamp as a boring person. I don’t think he was, of course; consulting a timeline, it’s clear that he was almost always busy doing interesting things while writing these letters. But these letters present the quotidian Duchamp; certainly, he wasn’t using his correspondence to work out ideas. There’s a vast gulf between the Duchamp presented here and the Duchamp of the interviews.

These letters were gathered from the recipients, as Duchamp never saved copies of his own letters (or letters sent to him). Gaps sometimes emerge: barely anything is said about the construction of the Large Glass; letters to Beatrice Wood don’t show up until 1940. Only one letter was sent during his very brief marriage to Lydie Sarazin-Levassor in 1927 (he tells Walter Pach on 24 June that marriage is “a delightful experience so far and I hope it will go on. My life is in no way changed by this.”). The next letter, sent to Katherine Dreier on 12 March 1928, notes that he’s been divorced since 25 January. An explanation of his personal life is not to be found in these letters; clearly, there’s a distinction between the public Duchamp and the private Duchamp, and the private Duchamp doesn’t make it into letters. (His letters to Maria Martins, which one presumes might be some of his most revealing letters, haven’t been made public.) Which is not to say that bits of emotion don’t show through: for example, in a series of letters to Katherine Dreier in 1928 he defends his backing out of the art world vociferously:

Your 2 letters announcing the possible stop of activities in the S.A. did not surprise me___ The more I live among artists, the more I am convinced that they are fakes from the minute they get successful in the smallest way.
This means also that all the dogs around the artist are crooks___ If you see the combination fakes and crooks___ how have you been able to keep some ind of a faith (and in what?)
Don’t name a few exceptions to justify a milder opinion about the whole “Art game”.
In the end, a painting is declared good only if it is worth “so much”___ It may even be accepted by the “holy” museums___ So much for posterity___
Please come back to the ground and if you like some paintings, some painters, look at their work, but don’t try to change a crook into an honest man, or a fake into a fakir.___
That will give you an indication of the kind of mood I am in___ Stirring up the old ideas of disgust___
But it is only on account of you___
I have lost so much interest (all) in the question that I don’t suffer from it___ You still do___ (5 November 1928; originally in English)

It’s unclear what exactly has stirred him up into this rage – in the letters that bookend it, he complains that he was never friends with Alfred Stieglitz (but he was never friends with anyone) and he rails against the idea of Waldemar George writing a book about him; he also complains that he’s feeling his age of 42. There are two letters from 1930 (one detailing his book on chess); none at all from 1931 or 1932, and by 1933 he’s happily in a relationship with Mary Reynolds and trying to get Brancusi’s art shown in New York. These letters don’t serve as biography: the exciting things seem to be happening in the margins.

But there are enough interesting details to make this book well worth reading: in 1935, for example, Duchamp attempted to sell his Rotoreliefs at Macy’s on consignment, with no luck. He accuses Alfred Barr of “malicious incompetence” in a rare unguarded moment. His correspondence attempting to get funding for his system of playing roulette (which became Monte Carlo Bond is entertaining: he’s not trying to figure out how to win, he’s just trying to get by, which he suspects could be done scientifically if he only had the funds to do it. In a letter to Yvonne Chastel, Duchamp mentions that a first edition of Lautréamont’s Les chants de Maldoror is “one of the 5 or 6 books that make up my entire library”; one immediately wonders what the other volumes would be. In 1950, Walter Arensberg, who believed that Francis Bacon was Shakespeare, appointed Duchamp Vice President of the Francis Bacon Foundation. And in a letter to the French critic Jean Suquet, Duchamp indicates his indebtedness to Roussel:

One important point for you is to know how indebted I am to Raymond Roussel who, in 1912, delivered me from a whole “physicoplastic” past which I had been trying to get out of. A production at the Antoine theater of “Impressions d’Afrique” which I went to see with Apollinaire and Picabia in October or November 1912 (I would be grateful if you would check the date), was a revelation for the three of us, for it really was about a new man at that time. To this day, I consider Raymond Roussel all the more important for not having built up a following. (25 December 1949)

A letter to Michel Carrouges points out that he hadn’t known Kafka’s “In the Penal Colony,” as Carrouges had suspected; rather, Roussel filled that space.

This is, it needs to be said, a beautifully edited and produced book; one might quibble, at times, about the jocularity of the English translations, but the French original is always provided for reference. Marginal notes identify figures and artworks mentioned in the letters; significant events in Duchamp’s life are similarly presented chronologically, creating a biography of a sort. The picture that emerges of Duchamp at the end of this book remains opaque. Certain correspondents recur over his life: Man Ray, Brancusi, the Stettheimers, Henri Pierre Roché, Katherine Dreier. But these are, by and large, Duchamp’s friends from whom he was separated by distance; letters, for Duchamp at least, present an odd cross-section of life, and at the end of this book Duchamp is still hiding.

2 thoughts on ““affectionately, marcel: the selected correspondence of marcel duchamp””