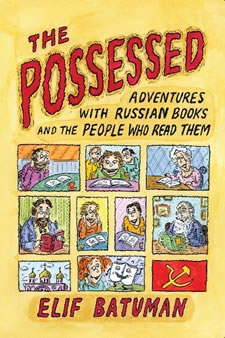 Elif Batuman
The Possessed: Adventures with Russian Books and the People Who Read Them
(Farrar, Straus & Giroux, 2010)

One of the most embarrassing section of almost any bookstore is that reserved for those books termed “belles lettres”: those books damned by not being full-on literary criticism (in which case they would appear in the bookstore at all) or biography, a safe area. Plenty of books that fall into this category are published; few end up on the shelves of Barnes & Noble; plenty get shelved elsewhere: the cultural studies section, or philosophy. There’s something anachronistic about “belles lettres,” down to the name; it’s a subject that one might imagine to have vanished with the nineteenth century, before literature was thoroughly professionalized. I’ve always had a weakness for the category: the specialist writing for a general audience is something that should be applauded, of course, as it provides a way in for those who wouldn’t necessarily have one; these are the sort of books for those who browse by nature, a species that might be increasingly threatened. It’s not a form that’s generally respected by academics: this sort of book won’t win academic acclaim, no matter what other good it might do. (Witness, for example, how little Susan Sontag is read, outside of the obligatory essay or two, in the academy: her audience, for better or worse, was the general public, and the academy reacted accordingly. The same might be said for Guy Davenport or John Berger; Marshall MacLuhan also fell into this space.) But for all its perils, “belles lettres” is a term that might helpfully be attached to Elif Batuman’s book, though I suspect that it’s more likely to be shoehorned into the memoir category: books need to be sold for readers to read them.

The risk being run here (and what makes academics wary of this sort of books, I think) is that of the derivative: writing about writing about books seems slighter than writing about books. Often this is only a pretext for memoir, a genre with embarrassments of its own; but in a few cases (Geoff Dyer’s Out of Sheer Rage comes immediately to mind) this can be pulled off. Dyer’s book, like Batuman’s, is written in the first person; the author is a primary subject, though crucially not the only one. Both also shade into travel literature; but in both, there’s something elliptical about the author’s self-presentation. At the end of the book, the reader has a sense of a sensibility; but there’s also the feeling that something has been withheld. Perhaps it’s propriety; I have a distaste for memoirs in general, but these work for me. Batuman’s life, like Dyer’s, is more interesting than the lives of most people, let alone those writing memoirs; but there’s the implicit feeling that it would be tacky to give everything away. The writing is what’s important; the life of the writer is necessarily a component, but it’s not the reason for the writing.

There’s a danger, of course, if one is to swing too far the other way; it’s the reason that most academic writing on literature leaves me cold, as it’s focused on the book rather than on how the book affects us. Batuman’s focus is on the intersection between the book and life, and the difficulty of finding a balance between the two; this becomes most clear in the final essay of the book, “The Possessed,” simultaneously a consideration of Dostoevsky’s novel sometimes given that name and a derangement of her friends studying Russian in grad school. It’s the most serious essay in the book, though not without levity: a point-by-point retelling of what actually happens in Demons, for example, comes across as hilarious and impervious to logic. Batuman maps her and her friends’ descent into madness against Dostoevsky’s odd novel about terrorism, a juxtaposition that risks going wrong in any number of ways. It works; partially because Demons resists the sort of easy allegorization that one could get with Crime & Punishment or The Idiot, but in large part because Batuman is deeply interested in the effect that books have on people: they are driving her classmates and her crazy, to the point where one eventually drops out and becomes a monk. (There are echoes here of characters glimpsed earlier in the book, similarly driven crazy by books; in the context of a Tolstoy conference, this seems hilarious, but viewed threw a personal lens, it becomes something different.) The book has the power to be a dangerous thing (one of the easy morals of Demons); at the end of the affair, Dostoevsky’s novel appears differently than it did before. It becomes clear why Batuman uses The Possessed as the title: possession requires a possessor, which demons might be doing their own work. The relationship between the book and the reader is what’s really important here. At the end of Batuman’s book, I’m tempted to go back to Dostoevsky’s; I remember muddling through it when I was much younger, though I suspect that time would have changed me. But it’s hard to want to be in the emotional state required to really appreciate a book that demands as much as that one.

This shouldn’t suggest that this book is a tough slog: it’s not that at all. The book before the last essay has an appealing lightness to it. A good chunk of this book (the “Summer in Samarkand” saga, which takes up nearly half the book, the visit to the Tolstoy estate) could be described as travel writing, which is something that Batuman’s very good at: everything, no matter how ordinary, becomes strange in her descriptions. Most of what she’s describing (Uzbekistan, how Russian scholars behave) is already going to be unfamiliar to most readers. Her focus cuts the sweetness of too many novelties and keeps the book compelling: for being a collection of essays, most of which have previously stood on their own, this turns out to be a book with a spine, a seriousness concealed by her writing’s lightness.

3 thoughts on “elif batuman, “the possessed””