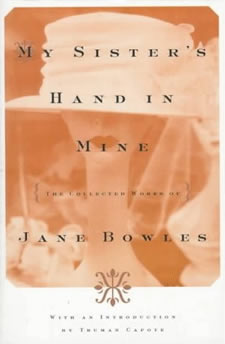 Jane Bowles
Two Serious Ladies
(originally 1943; published in 1966 as part of My Sister’s Hand in Mine: The Collected Writings of Jane Bowles, Farrar, Straus & Giroux.)

It’s a crying shame that Two Serious Ladies is only in print as part of Jane Bowles’s Collected Works: not that there’s anything wrong with the rest of her Collected Works, it’s simply that Two Serious Ladies is so perfectly complete on its own; it deserves to be a Penguin Classic, not one of the ugly redesigned ones, but one of the differently ugly older ones with the light green covers that didn’t smack of marketing, only belief in the power of literature. At one point, it could have been a New York Review Book, shelved between James Schuyler’s Alfred & Guinevere and James McCourt’s Mawrdew Czgowchwz. I don’t know what happened to Two Serious Ladies that it should be tied up so; maybe this is FSG’s fault.

Two Serious Ladies is a weirdly structured book. The first chapter, 34 pages long, introduces Christina Goering, a rich woman, strange from her religion-obsessed youth. Much later, she is visited by Lucy Gamelon, the cousin of her governess, who has heard stories about Christina; though Lucy worked in publishing, she is not up to anything, and she promptly moves in with Christina after her second visit. Some months later, Christina is invited to a party; she sees her acquaintance Frieda Copperfield, who is distraught about a trip she will have to take. She is then distracted by a morose man named Arnold, who she goes home with, thinking this is the interesting thing to do; she stays the night at Arnold’s house, where she meets his parents, who she likes better than Arnold. Christina sells her house and moves to a smaller house on an island. The second chapter, 75 pages long, is about Mrs. Copperfield’s trip to Panama with her husband; Mrs. Copperfield evidently hates to travel, but she leaves her husband for Pacifica, a prostitute. The third chapter, 90 pages long, returns to Christina Goering: she is now living in a house on an island with Arnold and Lucy Gamelon; eventually, they are joined by Arnold’s father. Christina has an affair with Andy, a man she meets in a bar; she leaves him after a week for a monstrous man named Ben who takes her for a prostitute. Five pages from the end of the book, Frieda Copperfield returns, evidently having returned to the city with Pacifica, who is running after a boy.

The plot is not why I find myself reading this book over and over again; rather, it’s the way in which the characters behave. In a characteristic passage, Christina Goering and Lucy Gamelon are sitting outside their house; Lucy is thinking about how much she hates Arnold. “He is even too lazy to court either of us,” she tells Christina, “which is a most unnatural thing you must admit – if you have any conception at all of the male physical make-up. Of course he is not a man. He is an elephant.” But Lucy most hates Arnold for freeloading on Christina, which is of course something that Lucy is also doing:

They sat in silence for a few minutes. Miss Gamelon was thinking seriously about all these things when suddenly a bottle broke against her head, inundating her with perfume and making quite a deep cut just above her forehead. She started to bleed profusely and sat for a moment with her hands over her eyes.
“I didn’t actually mean to draw blood,” said Arnold leaning out of the window. “I just meant to give her a start.”
Miss Goering, although she was beginning to regard Miss Gamelon more and more as the embodiment of evil, made a swift and compassionate gesture towards her friend. (p. 115)

Within ten pages of this scene, Arnold is calling Lucy “Bubbles” and they are sharing a room, united, perhaps, by their dislike for each other. None of the characters in Two Serious Ladies are likeable. They are not pleasant; at one point Arnold describes Lucy as “constantly in either a surly or melancholic mood,” which could be said about any of these characters. There is no pretense of redemption: these characters start out terrible and they will end terrible. This makes it a very funny book; but, in a way, it’s also more realistic.

There’s something interestingly off in the way the characters in this book make choices; they are all inscrutable. Here, an interaction between Christina Goering and Andy, her would-be paramour:

“Step back a little farther, please,” he said. “Look carefully at your man and then say whether or not you want him.”
Miss Goering did not see how she could possibly answer anything but yes. He was standing now with his head cocked to one side, looking very much as though he were trying to refrain from blinking his eyes, the way people do when they are having snapshots taken.
“Very well,” said Miss Goering, “I do want you to be my man.” She smiled at him sweetly, but she was not thinking very hard of what she was saying. (p. 166)

There’s a disconnect between thought and action that’s funny as well as terrifying: none of their behavior is at all predictable. In another novel, this sort of action could be accounted for by drugs, which would feel like a narrative copout; but these characters are entirely straitlaced, and even drinking doesn’t reliably change their inhibitions.

This isn’t quite surrealistic whimsy, though the characters do appear to move in dream-like trances: at least in the sections based around Miss Goering, the sense is less of a world gone strange than it is of strange characters who don’t fit into the regular world, characters who could not be described as surrealist dreamers. Miss Goering and her friends appear to move from Manhattan to a largely rural Staten Island, perhaps the Staten Island that Arshille Gorky painted to look like the south of France; the setting is identified by geography rather than by name, but it maintains the prosaic stolidity one expects from that borough. For excitement, they take a ferry to New Jersey, where things seem to be much the same. (There’s a certain similarity to Kafka’s Amerika, though that would have been published in English after Two Serious Ladies.) The Panama that Frieda Copperfield visits is more fantastical; I find myself less drawn to this part of the plot partially because we’re used to seeing Latin America described as a fantastical place where anything can happen. The drama there is still very much more personal than based on its setting: what happens to Mrs. Copperfield on her trip is not what would happen to anyone else, but Mrs. Copperfield and Pacifica don’t sparkle quite as brightly as Christina Goering and her followers.

It’s left to the reader to discern what exactly the narrative of Mrs. Copperfield and Pacifica has to do with the story of Christina Goering; presumably Copperfield & Goering are the eponymous two serious ladies of the title, although Lucy Gamelon appears more often in the book than Frieda Copperfield does. In their final discussion, Frieda gives an idea of what she might have been trying to do:

“But you have gone to pieces, or do I misjudge you dreadfully?”
“True enough,” said Mrs. Copperfield, bringing her fist down on the table and looking very mean. “I have gone to pieces, which is a thing I’ve wanted to do for years. I know I am as guilty as I can be, but I have my happiness, which I guard like a wolf, and I have authority now and a certain amount of daring, which, if you remember correctly, I never had before.” (p. 197)

Ms. Goering promptly admits her dislike for Mrs. Copperfield; there seems to be something incompatible about the way that the two of them are working out their lives. When we first meet Christina, she is purifying a young friend’s sins in a ceremony involving a burlap sack and a great deal of mud; through her narrative, talk of sin comes up from time to time. Christina and Lucy, for example, get into an argument about whether sports give Christina a feeling of sinning. Near the end of their affair, Christina realizes that Andy’s self-image has improved and he no longer thinks of himself as a bum:

This would have pleased her greatly had she been interested in reforming her friends, but unfortunately she was only interested in the course that she was following in order to attain her own salvation. (p. 172)

Christina’s theology seems to be her own brand of gnosticism: like Irenaeus’s description of the libertine gnostics, she seems to be trying to save herself through absorbing the sin of the world, which must be destroyed for truth to appear. Frieda, by contrast, appears to finally be enjoying the broken world as it is.