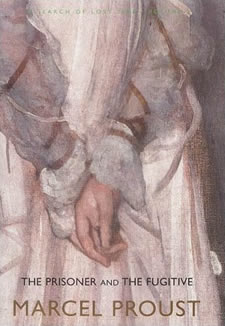 The last three books of Proust are the ones I find myself coming back to; this time I return because of seeing Chantal Akerman’s filmed version of this book (La captive, 2000); it was so different than what I remembered of my first viewing three years ago that I thought it was time to turn back to Proust to see how he’d changed. I preferred the new translation of this book to the Moncrieff last time through; but this volume is handier, which is a large part of why I’m using this version. It’s vexing that this book & the final volume still aren’t available in this country because of copyright, though I kind of hate the chunkiness of the American paperback versions of this translation.

What I like about this section of the book is how with the Albertine captivity narrative, the novel jumps the rails of realism. The narrator’s problems in this book are not, on the face of them, the problems of anyone real; rather, it’s an imagined picture of heterosexual desire, a thought-experiment on Proust’s part. I’m not especially interested in how life in early twentieth-century Paris; that isn’t without interest, of course, but it’s the behavior of Proust’s characters and the narrator’s changing understanding of this behavior that I really care about. There’s not a huge amount of depiction of society in this volume (where I found myself losing interest in the earlier volumes); rather, the action is mostly interior.

This is a book about jealousy; Albertine is the focus of the narrator’s jealousy, of course, but her person is almost immaterial, a blank screen on which the narrator can project (or reflect) his own fantasies:

But what I could not bear to imagine in Albertine was my own unceasing desire to attract new women, to sketch out new novels in which they would figure; it was the thought of her casting her eye, as I had not been able to restrain myself from doing the other day, even when seated beside her, at the young girl cyclists sitting at the tables in the Bois de Boulogne. Just as one can know only oneself, one could almost say that one can be jealous only of oneself. Observation is of little use. Only from one’s own pleasure can one derive both knowledge and pain. (pp. 356–7.)

With such a narrator, it’s hopeless to imagine Albertine as a real character; rather, she’s a fantastic projection. He reasons that he should have a great love, but doesn’t really have any idea what to do with it when he finds himself in one. There’s no romance in their external relationship – at one point, the narrator wonders whether he ought to buy her a yacht, as if that were what one did in the situation he finds himself in. Their relationship takes place almost entirely in the narrator’s mind, and one wonders if he’d prefer the physical Albertine not to exist; certainly he doesn’t do very much with her, and he comes across as absent-minded, more caught up in this thoughts than in anything that might be going on around him. They talk, but the narrator drifts off, and gets caught up in his own thoughts; early in the book, they discuss noises on the street, which leads to a five-page passage where the narrator considers waking from sleep. It’s virtuosic, of course, some of the nicest passages in the book, but it suggests solipsism:

Wasn’t it perhaps Françoise who had been sleeping, and I who had wakened her? Or rather, wasn’t Françoise somehow enclosed within me, for distinctions between people and their interactions hardly exist in that sepia darkness where reality is no more translucent than in the body of a porcupine, and where our minimal perceptions can perhaps give an idea of those of certain animals? (p. 109)

Albertine is beside the narrator on his bed, but she has been forgotten entirely, replaced her even as a stand-in for the other person by Françoise. It’s difficult to fault the narration for this, of course. At the end of the passage, where the narrator considers the cries of street vendors, we are told that “the cries rolled on for me like an echo of the waves where Albertine left to herself could have been lost, and took on the sweetness of a Suave mari magno” (p. 113). The reference is to the beginning of Book II of Lucretius’ De rerum natura, where he considers how nice it is, when safe on the shore, to watch someone drowning at sea; this is almost exactly the position of the reader, watching the narrator bumble through his jealousy.

This is being narrated retrospectively, of course, an old man reflecting on a younger man’s folly, but sometimes one wonders how well is is being done. A dumbfounding moment late in the book:

Albertine had never told me that she suspected me of being jealous of her, of spying on everything she did. The only words we had exchanged about jealousy, a long time before, seemed to suggest the opposite. (p. 306)

The narrator throughout the book has been acting like a lunatic; one wonders if he thinks that Albertine is an idiot and doesn’t notice anything, or whether he really doesn’t understand how strange his behavior actually is. (The narrator, as mentioned, is somewhat disconnected from reality; early in the book, for example, there’s a hilarious interlude where he fails to understand how a telephone works; a bit later he describes an airplane taking off in such a way as to make it appear that it suddenly moves vertically.) Maybe it’s simply that he’s more interested in jealousy than in other people; a few pages after he considers that Albertine couldn’t have noticed his jealousy, this passage appears:

And no doubt that is how it always is when two people face each other, since each of them is unaware of a part of what is inside the other, even what he is aware of he only partly understands, and each of them shows the other only what is least personal in him, whether because they have not understood themselves and think that the rest is unimportant, or because certain attractions which are not truly part of them seem to them more important and more flattering, or because there are other qualities which they think they need in order not to be despised, but do not have, and so they pretend to care nothing for them, and these are the things which they seem to despise above all and even to abominate. But in love this misunderstanding is carried to the highest degree since, except perhaps when we are children, we try to ensure that the impression we give, rather than being an exact reflection of our thoughts, should be what these thoughts conclude will have the best chance of getting us what we want . . . (pp. 317–8.)

It’s for passages like this that I go back to Proust; and going back, of course, is a pleasure in and of itself, noticing what I marked up the last time through, a record of change in different colors of ink. It’s hard not to think, when re-reading Proust, that it’s more worthwhile doing that that keeping up with what’s new.

(This edition does, it should be noted, have weird punctuation issues: stretches of dialogue within a paragraph are kept inside single quotes, and “he saids” and “she saids” appear inside those single quotes; different speakers are introduced with a dash. I assume this is an attempt to follow French convention; it appears jarring and unnecessarily strange to the reader of English books. The American versions of the new translation didn’t have this punctuation issue; but I suspect that I care more about the translation of punctuation than most people do.)

One thought on “marcel proust, “the prisoner””