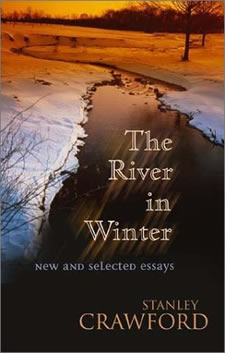 A consequence of growing up in the rural Midwest is a sort of pragmatism when considering art. This isn’t a pragmatism that Peirce or James wouldn’t recognize; rather, it’s a need to know what something’s good for, if anything. There are two causes of this: first, an environment in which art doesn’t exist as a matter of course; and second, the Midwesterner’s deep-seated belief that they are normal. I left the Midwest a long time ago, but I still find this attitude in myself from time to time; I’m not very good at appreciating architecture, for example, in no small part because the buildings that I grew up with were functional and nothing more. It’s an attitude I find in my reaction to reading as well: wondering who would read anything comes naturally when you grow up in an environment where no one reads anything. Obviously, the Midwest is not a yardstick against which anything should be measured; but it’s hard to step outside yourself.

There’s thus something that I find reassuring in Stanley Crawford’s writing: a sense of balance between art and work. Crawford’s fiction doesn’t appear to have reached a very large readership, which is a shame, as he’s a fine writer: his novels are modest and have been spaced out across forty years, but each is distinct and inventive. In his non-fiction – Mayordomo and A Garlic Testament – a philosophy becomes more apparent. Crawford makes a living as a garlic farmer in New Mexico; it’s an occupation that he’s put as much thought into as his fiction. Crawford’s someone who’s thought a great deal about how he and his writing fit into the world: I find this easier to stomach than the Monsieur Teste-like figure that most contemporary writers cut. This isn’t the most reasoned response; it’s more instinctual than not, but it is there.

The River in Winter is not the sort of book of essays that one expects from a fiction writer: only one of the essays in this book, “The Village Novel,” has anything to do with fiction writing, and even there Crawford is oblique (his “village novel” is metaphorical rather than a book), pointing out that living successfully in a community (in his case, Dixon, New Mexico) largely precludes writing about it:

Writers who grow up hearing episodes and chapters of the village novel at the knees of parents and grandparents and aunts and uncles set out into the literary world with something far better than a formal education – but this is also the source of the grief they can suffer when they offer up the contents of the village novel as a real book, a novel. They will then be charged with betraying confidences and appropriating something that belongs to no one person, or for quite simply getting it all wrong. (p. 146)

Crawford’s concern in this book isn’t writing; rather, it’s about figuring out how to live. He adopts a “small is beautiful” stance, following E. F. Schumacher; he observes the natural world around him and the way that people live in it. A third of the book has to do with water, as did Mayordomo, his chronicle of his time spent running a community irrigation ditch; while that book was concerned with how one particular ditch was run, here his eye roves, considering the myriad forces at play controlling water rights (especially the longstanding water adjudication batter) in northern New Mexico:

The ultimate effect of the adjudication process is to allow land to be separated from water, with complex consequences at the local level . . . . I have long argued that the fatal flaw of the adjudication process is that it allows the “commons value” of a water right to be privatized away and dissipated. Much of the commons value of water resides in the acequia system, which conveys the water from the river to the individual landowner. When that landowner is allowed to sell off his water right, he is also selling something which does not properly belong to him as an individual property owner, in the form of that portion of a commons which until then has underpinned and sustained the equity of his property as land and water. (pp. 69–70)

Crawford is talking about northern New Mexico’s idiosyncratic system of water distribution from his perspective as a small farmer; but he’s also aware that he’s suggesting the broader situation that all of us are in, a world increasingly full of reifications. While Crawford is too polite to make this a political book, his politics are apparent; as is a clear sense of morality. Comparisons might be drawn to Lewis Hyde; but Crawford seems to be more interested in people than in art. Later he considers the role of the funeral in his village and how we treat death in general:

Perhaps one of the reasons people leave villages all over the world is that they want to live in places where the lesson is not so relentlessly taught. Suburbs are places without graveyards, without necropolises. They zone out the dead. Like garbage and sewage, the dead are ferried away to special ghettos elsewhere – or anywhere. The modern liberal solution of scattering ashes to the wind seems to solve the problem nicely. By making the dead disappear in a puff of gray ash, we can conquer death itself. (p. 152)

It’s not all doom and gloom, of course; a number of these essays are attentive to the physical world. He considers the mud floor of his house and the apple crates that he’s reused for years in a manner not entirely dissimilar from Francis Ponge; but his is also an interest in human use and how we shape objects and the environment in which we live. His mud floor:

There are times when I have fretted over the unevenness of the floor, but in repairing it again last summer I realized that under our wear and tear it will continue to evolve in ways that other surfaces within the house will not, surfaces that will be recovered, smoothed down, painted over, again and again. The history inscribed in the surface of our mud floor is a version of the history of the house we built with our own hands and of our lives in it since 1971. (p. 9)

The reader will notice some repetitions in this book: the essays’s disparate original publications are doubtless to blame for this. This isn’t to say that the essays are repetitious: each stands alone complete, and might best be read that way rather than being gulped done all at once. This book feels like a coda to Mayordomo; while Crawford makes this seem entirely normal, the situation that he describes is so outside the experience of most Americans’ civil interactions that it stands redescription. It would be nice to have more from Crawford; but one senses that he’s busy living.

One thought on “stanley crawford, “the river in winter””