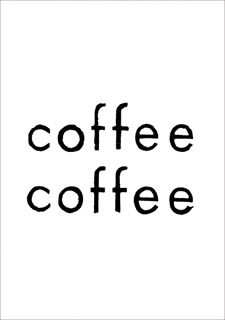 Coffee Coffee is a book of poetry consisting of 65 words – that is, if four occurrences of the syllable “ly” can be said to count as words and the two words of the title are discounted. It’s a small book, 40 leaves of paper; the versos are blank, and most rectos consist of a single centered word, though in some cases up to eight words appear, similarly centered.

There’s a rhythm that appears as one flips through this book, sounding out the words: generally three or four pages with a single word will be followed by a single page with four words: “hard / lookout / guarantee / oh / bird bird bird”. The three birds are stacked on top of each other: the reading speeds up after getting to them, especially after the slowness inherent in “oh”: looking at the word on the page, the reader slows down further: why does the word need an “h” to make a long “o” sound? Giving the words space to breathe makes all of them strange: “lookout,” for example, must be functioning as a noun, though given a single space it could become a command. The arrangement also bears scrutiny: hard seems more closely related to guarantee than it does to lookout; lookout, in turn, might be connected to bird bird bird.

The words function as signifiers as well as graphic shapes: early on, the reader encounters a page with four letters in two lines: “o r / o r”. The four letters form the corners of a square: a + of white space appears between them. We could read them as “or or”; we could almost as easily read them as “oo rr,” “oror,” or simply “o r o r”. What we’re looking at is four markings on a page: we give them meaning. Because previous pages have words on them (some multiple stacked words), we assume these should be two words as well. But it’s the act of reading that’s making them “or or”.

Words existing on their own invite the reader to slow down and savor the sound: the “v”s that move through the final four words, “heavy / crying / velvet / favor”, the missing “v” in “crying” making the double “v” in “velvet” seem more luxuriant. Graphically, the words “sleep” and “sheer” aren’t very far apart; but they sound very different and bring out very different responses in the reader. In the middle of the book, a stacked “cigarette / cigarette / cigarette / cigarette” makes me think of Harry Mathew’s novel Cigarettes, where he points out that the sound of a train is almost exactly “cigarette, cigarette, cigarette”.

The original version of this book was published as a stapled 8.5” x 11” book in 1967; it seems to have been created on a typewriter and then mimeographed. An excerpt from this book appeared in issue 2 of Vito Acconci and Bernadette Meyer’s 0 to 9; and a couple of these poems appear in the misleadingly titled Complete Minimal Poems that Ugly Duckling put out a few years ago. An online version of this book can be downloaded at the Eclipse archive; there you can find both a scan of the original edition as well as a reading copy, where the text has been reset, as is the case with the poems that appeared in the Ugly Duckling edition.

Format is something that’s extremely important when dealing with visual poetry: a photograph of a piece of paper is not the same thing as a piece of paper, even though the words might be identical. Correspondingly, a great deal of care has been taken in the production of this book. There’s one major difference from the original edition: the size is much smaller, meaning that there’s less white space around the words. The text appears in text that appears to be typewritten; this isn’t hard to do on a computer, of course, but it appears to have actually been created with a typewriter. Looking closely at the page where “cigarette” appears four times, it becomes clear that these words are not actually identical in the way that a computer-generated page would tend to be: the loop of the “g” in each word is distinct. It appears that the original version was scanned into a computer, to be turned into a polymer plate for letterpress printing: moving one’s finger over the book, one feels the imprint of a printing press. There’s the temptation to think that impression is the impression of the author’s typewriter: but the original edition, mimeographed, would not have such an impression.

It’s hard to get around thinking about aura with something like this. Sometimes looking at an old print of an old photograph – this happened to me most recently at the Muybridge show in Washington – one gets the feeling of continuity: of looking at what the photographer saw. Light reflected off the scene the photographer saw made a chemical impression on the film; that negative was chemically transformed, and when we look at it we see something that “saw” something that “saw” what’s being depicted in the photograph. This is an abstraction, of course; but it’s not quite as high-level an abstraction as the one involved in digital photography and reproduction, which we can never entirely get around. Because we’re enmeshed in the digital, earlier mechanical reproduction appears more real, more connected, even when it was deeply part of the technology of its day. But when we look at this, we think we can see the impress on the page made by Saroyan’s fingers. We do, sort of: maybe it’s possible to see where he would have hit the keys harder, leaving a darker impression, although presumably when making a copy for reproduction he sought to make the most normalized page possible.

Reproduction thus becomes a tricky issue. Saroyan’s poetry straddles the fine line between text and the visual arts, as does all visual poetry; in Dick Higgins’s term, it’s an intermedium. We think of Saroyan as a poet rather than as a visual artist, and thus his poetry is read in books; however, Carl Andre, generally thought of as a sculptor, has similar typewriter poems displayed in vitrines at the Chinati Foundation in Marfa. Both presentation models might be seen as appropriate, though they have their drawbacks. An edition of Saroyan’s poems that deviates from his original presentation (even one that deviates as minimally as this one) loses something; but resetting the poems gets us away from the problem of venerating them as art objects. I like this edition: even though it’s well done, it’s cheap. A large part of the reason for visual poetry’s general lack of impact is the inaccessibility of the original works; it’s hard, for example, to find a copy of Emmett Williams’ and La Monte Young’s 1967 Anthology of Concrete Poetry for under $100, and I suspect that most of the copies that still exist are not being read. Primary Information is doing valuable work in making this available; I hope they continue to do similar work.