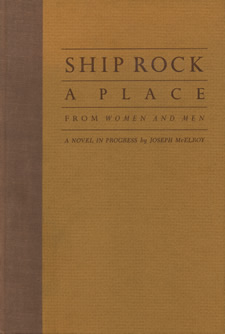 This short book has the subtitle “From Women and Men, a Novel in Progress”; it’s a section of that much larger book published on its own in 1987. This was a limited edition, beautifully printed by William B. Ewert, who ran a small press in New Hampshire that seems to have mostly published poetry. It’s a lovely book; used copies are still floating around. It’s nice reading McElroy like this: it’s easier to concentrate on the language, rather than trying to balance the myriad themes webbing through his larger books. McElroy’s prose needs to read (and re-read) slowly: it’s hard to do this with longer books.

This is a book concerned with places, as the title suggests, and names: in particular a place in New Mexico called Shiprock or Ship Rock, as it is spelled in this book. Ship Rock is both a town and a natural feature:

The Rock rises upwards of fifteen hundred feet right up off the plateau. Half again that long at its base on this south side, it still seems less massive than lofty, for it is alone. That’s what the local Navajos cal it – the Rock. Pretty much one rock (mono-lith) with craggy crops lifting toward two westward peaks with a massed steady shift against downward veins of long, vertical sharding and against the backward pull of what starts two-thirds of the way up, a slow climb beginning at the top of what looks like sheer cliff and climbing from there so that, notch by notch, the eye that is taken along these splits and levels takes his whole crazy body into what he’s witnessing, until something is an event. (p. 11)

There’s a hint of why “Ship Rock” is used instead of “Shiprock” in the bisection of “monolith” in to its components, later elaborated: “And he thought he heard a car from far off toward the town of Ship Rock (spelled as one word with a small r, he later noted” (p. 34). The protagonist has heard the words ship rock spoken; he hears them as two words, not concatenated into a single word. Shiprock is a name; Ship Rock is a name and two words, both of which can signal. One of those words is factual: Ship Rock is a rock, albeit a very large one. The other is metaphor: people look at Ship Rock and see a ship. Much of this book is an attempt to make sense of the rock’s dual nature. Plot is incidental to this book: the protagonist, who is unnamed and whose profession is left unclear, has traveled to Ship Rock and stops to consider it for a while.

There’s more than an echo of Wallace Stevens (or perhaps A. R. Ammons) here; as this text appears here, it’s barely fiction as it’s usually construed, and one could almost make an argument that this might be better understood as an extended prose poem. Certainly there’s a deep concern with language and its rhythms. Here the protagonist considers the word “neck” as geologists use it – Ship Rock is a type of formation often called a “volcanic neck” – though the geologists’ usage doesn’t make intuitive sense because there’s no head attached to the neck:

But wait, a voice says, we mean neck in the sense of throat. It doesn’t have to have a head on its shoulders. But the truth is that the throat is long gone: the neck is what’s left, the neck that was inside the throat, if you see.
The way the heart is inside the stomach at seven in the morning after a hard night. God, he recalls necks of land with plates of Little Neck clams on them, but not in the noise of last night. (p. 26)

The voice that starts this is inside his head: he’s thinking about language, and trying to understand it: we understand geologic processes – a volcanic event – in terms of the more familiar. Association leads to more association; finally he ends somewhere else entirely. Little Neck, New York, where the clams are from, might get its name from a peninsula that looks something like a neck: a peninsula seems more obviously like a neck than a volcanic mountain does. But the language here catches: the last sentence sprinkles its iambs with anapests and begs to be read aloud. In the interjection, there’s an echo of the sixteenth-century “Western wind, when will thou blow” (“Christ, if my love were in my arms”).

McElroy knows, of course, and his protagonist presumably does as well, that the Navajos, when they called Ship Rock “The Rock” wouldn’t have actually used those particular words: their own words would naturally have sounded different. Later in the book there’s mention made of an organization with the initials “D.N.A.”; those expand to “Dinebeiina Nahiilna Be Agaditah,” an actual Native American legal aid organization with an acronym that functions, intentionally or not, two ways. Coincidence is a driving force here; a place is one thing, a name is something else entirely. Proust mapped this territory first.

An interview by Tom LeClair in Anything Can Happen: Interviews with Contemporary American Novelists (1983) has McElroy describing the writers that he was interested in while he was writing Women and Men, among them Alain Robbe-Grillet:

. . . God knows Robbe-Grillet can be pompous enough even in Jealousy, a fine book that represents I guess a desire that’s another side of me, to turn microscopic seeing into meditation – to be truthfully precise. But to what and through what? I’m sick of this dogma, a platitude supporting the virtue of concreteness without ever asking why concreteness, what philosophical conclusions does it rest on? (p. 239)

This might perfectly be describing what’s happening in Ship Rock. A rock, something as massive as Ship Rock, is nothing if not concrete: but understood geologically, it had to once be liquid to exist. References to Sandia Man, Cochise Man, the Pueblo Indians, the Navajos, dot the text; all of these groups inhabited (or inhabit) the area around Ship Rock: the rock would have appeared the same to them, but humanity exists on a tiny timeframe geologically.