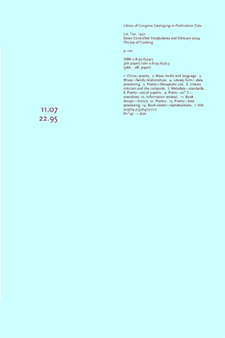 Like Tan Lin’s previous plagiarism/outsource, this is a book with a title in flux; I’m using the title on the spine, though the title page (appearing as a verso, not a recto) gives the title Seven Controlled Vocabularies 2004 [Airport Novel Musical Poem Painting Theory Film Photo Landscape], and the Library of Congress cataloging-in-publication data on the copyright page, recto, gives a further variation on those elements with different punctuation. (A first LoCC-I-PD appears on the front cover.) A spread after that gives the title as The Joy of Cooking; the next spread presents another variant. As far as I can tell, there are six different titles to this book. A foreword by Laura Riding Jackson appears, as the back cover promises, on page 162; this is not, of course, a foreword written for this book, but a photocopies of her foreword to her own Rational Meaning: A New Foundation for the Definition of Words and Supplementary Essays from 1986.

This is a book built from appropriations, from pieces of other books, as the title suggests; but more to the point, this is a book straining the forms of a book. Or possibly this is a book that explodes the bounds of books: at his recent book party at Printed Matter, Lin was a huge number of ancillary volumes created through Lulu; yet more material is floating around the web in various formats. I was given copies of Blurb and Selected Essays about a Bibliography, to which I contributed content; I’ve looked through these books and a number of the related works online, some of which, like the appendix seem integral to understanding Lin’s project. I certainly won’t pretend to have read everything: it seems impossible to tell where this book ends, or if it has ended.

How can we read Seven Controlled Vocabularies? The method suggested by the form is to dive in at random and float around for a while; to read it from front to back is perhaps to read this book against its grain, which is what I did. And one notices that despite the book’s chaotic appearance, the page numbers do march from the beginning of the book to the end in an entirely linear fashion, perhaps the most constant design feature of the book. The first text inside the book that one finds reading from the Western front cover is on what would be page 1 of the book: it says “[INSIDE BACK COVER]”. A Chinese edition of the book, available on Lulu, suggests that a front cover is sometimes a back cover; and so the front cover of this book might also be its back cover, and the back cover contains much of the same information available on the front. As one pages through the book, front matter appears, not necessarily where one might expect it; unexplained numbers (“11/07 2.21”) appear on one of the title spreads.

The first page number appears on page 9, where there appear acknowledgements. These are set in the same type (Scala Sans) as the rest of the book; on first glance, this seems like it might be straightforward. Details pop out though: the last line, a paragraph by itself, says that the photo on page 182 is by the author. Flipping to page 182 reveals a small photo, which might be by the author. The paragraph above it suggests that the illustration on page 45 is Stanley Spencer’s The Resurrection, Cookham; turning to that page reveals what looks like a photograph that isn’t of any sort of resurrection, though it might be a detail. But the illustrations that ostensibly appear on pages 237 and 256 can’t actually be found, as the book doesn’t have that many pages. Re-reading the acknowledgements, one realizes that it’s been lifted from another book; probably the book was not written when Lin was a “Post-doctoral Research Fellow at Liverpool John Moores University between 1999 and 2002” as one might believe. Google, ever useful, suggests that these acknowledgments are from Timothy Bewes’ Reification, or the Anxiety of Late Capitalism. The following page contains an editorial note, an authorial note on methods used to produce the book; it appears to be “real” in that Lin could have conceivably written it, but the seeds of doubt have been sown. Opposite is text in Chinese; it seems to be a translation of the editorial note.

The book proceeds: there’s a blank verso, then a recto with a heading. Flipping through the book reveals seven of these, presumably the Controlled Vocabularies of the title:

After the last, there’s an About the Author, which seems to be accurate. But out of the apparent chaos of this book, a structure can be discerned: inside each section, there does seem to be an internal grammar. The first section, for example, pairs text on the verso pages with labels for non-existent plates on the versos; the second section pairs text with photos, though the photos seem to be out of synch (in the style of Hollis Frampton’s film (nostalgia), obliquely referenced here) with the text.

Themes emerge through the book, though they seem to disappear almost as often as they pop up: the changing form of the book, of course; the meaning of plagiarism in contemporary composition; the parallel changing world of food; metadata as it relates to reading; reality television; the obscurantism of computer jargon; and perhaps how the canon has become something personal rather than universal. The Joy of Cooking, for example, has a very personal meaning to Tan Lin (which can be understood by reading the unincluded Appendix to this book); reading this book without that leaves the reader in the dark. Parts of this book remain obscure to me: how the photos in it work, for example. Some are probably of personal significance, as seemed to be the case with the photos in Lin’s earlier books; but right now I can’t make sense of them. I suspect that there’s a definite meaning there: but it may only be as part of an ecosystem of other, related books that those meanings might emerge.