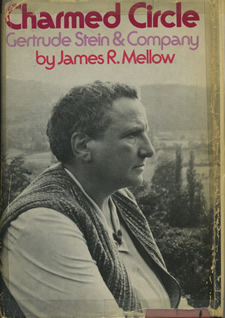 I dug this book out of the basement of the Strand where the literary criticism now lives; I felt like maybe a proper bio of Gertrude Stein was in order, and everyone seemed to like this one. It’s a pleasant book: it’s hard for me not to like reading about Gertrude Stein & the old familiar story of how Modernism happened. Having just spent time with the later David Markson books, it’s entertaining to find a number of his anecdotes about Stein in very similar wording here: there’s always a frisson at the feeling of walking in another’s footsteps. Markson doesn’t seem to have liked Stein for whatever reason; I do, though I wonder how much her life gets in the way of her work. Going to the biography isn’t the best response to that, but maybe it’s a way in.

Mellow’s reading of her work is almost entirely biographical: figures and events in her life that can be mapped to her work are. Conversely, more abstract texts seem to largely not figure in Mellow’s reading; this book is first and foremost a biography, not an overview of her work. The Making of Americans, for example, gets short shrift, except in how it can be read as a Stein family history. Mellow can be most usefully read against her autobiographies: he finds and notes inconsistencies with the historical record. One starts to wonder then why Stein had her start as a fiction writer: was it simply that fiction was the easiest way into being “literary”? That poetry could be too easily ignored? Stein would seem to be read far more often as poetry than as fiction now; but here she is most often cast as a cryptic autobiographer.

As familiar as her life is, there are still occasional surprises: her plan to co-author a biography of Ulysses S. Grant with Sherwood Anderson, for example. The Autobiography of Alice B. Toklas was evidently translated into Italian by Cesare Pavese, who also translated Moby-Dick: is it possible that Pavese was so little known in this country in 1977 that his name should be misspelled twice? (My copy is the original hard cover edition; presumably this was corrected in reprintings.) And it’s odd to think of Matisse visiting New York, though I must have known that he had been in this country to install his murals at the Barnes Foundation. Buckminster Fuller, it appears, showed up to the premiere of Four Saints in Three Acts in his Dymaxion car. Carl Van Vechten proposed a film version of the Autobiography.

But beyond trivia, Gertrude and Alice are, of course, fantastic characters; that accounts for a great deal of my interest in reading about them. This could almost be lifted straight from Two Serious Ladies if the names were changed:

Gertrude was to display certain peculiarities as a driver; she could go forward admirably, but she shunned reverse. This necessitated an uncompromising attitude in the matter of parking – which frequently meant directly in the path of other parked vehicles. It was on the question of parking and refusing to back up that Gertrude and Alice had their only violent arguments on the subject of driving. There were those, however, who maintained that even Gertrude’s forward driving could present certain hazards. She had the habit of conversation, and to her passengers it often seemed Gertrude did not pay sufficient attention to the road. This frequently made riding with her invigorating; her brisk turns could sometimes be hair-raising. She did not like to drive at night but often was obliged to because she did not always believe in road signs and thought road maps and predesigned routes hampering to her freedom of action. She preferred trust to instinct. (p. 228)

Most of the characters in this book are fairly familiar: first, from Stein’s accounts, which in style make the biographer’s task more difficult, but also from Malcolm Cowley in Exile’s Return, Robert McAlmon & Kay Boyle’s Being Geniuses Together, William Carlos William’s autobiography, Samuel Putnam’s Paris Was Our Mistress, Hemingway’s thing. I still haven’t gotten around to Matthew Josephson’s memoirs, though I probably should. There are more, of course. American ex-pats in Paris have been covered exhaustively. We know how Gertrude and Alice behaved. It’s the character of Leo Stein here who’s most weirdly intriguing; Leo Stein is so ignored that his poorly-edited Wikipedia entry makes it sound like he was living, and then had a “romance-induced conflict” with his cousin Fred. He’s also distinguished there from “Leo Stein (writer)“, which would smart were he still alive. Leo seems roughly analogous to the figure of Harry Crosby at the end of Exile’s Return, the figure with enormous potential who couldn’t settle on one thing long enough to make a mark, always thought of as smart but jealous of his little sister’s success. One doesn’t feel sorry for him particularly; but it’s a chastening narrative. After Gertrude makes it with her Autobiography, he becomes a heel: “Practically everything that she says of our activities before 1911 . . . is false in fact and implication, but one of her radical complexes, of which I believe you [Mabel Weeks] know something, made it necessary practically to eliminate me.” (p. 356) After that, no more is heard from until he dies.

A puzzling question that isn’t directly addressed by this book is exactly what happened to Gertrude Stein later in life: how her taste seems to falter late in life. Her right-wing politics before World War II maybe aren’t that surprising : but it’s still astonishing to see the New York Times interview from May 6, 1934 where she explains that Hitler should have been awarded the Nobel Peace Prize. Her lasting friendship with Bernard Faÿ, who would become a collaborationist, also puzzles: what exactly was the appeal of the man? His introduction to the abridged Making of Americans sells her short; it’s odd that she kept him on, especially when she was breaking with so many other friends. Her later taste in artists confuses as well; some of this can be seen from reading Everybody’s Autobiography against Alice B. Toklas. Thornton Wilder isn’t quite Hemingway or Fitzgerald. She starts liking Francis Picabia precisely at the point where most people stop liking him; she takes up, and drops, Pavel Tchelitchev and the Neo-Romantics, who are probably in need of a critical reappraisal anyway. Why in the world did she like Francis Rose? Here he’s only introduced after the first Autobiography; evidently he wrote a memoir of his own, which might be worth looking into, but why Gertrude Stein, seemingly alone in the world, should like Francis Rose’s paintings is entirely unclear. Her later writing doesn’t drop off, at least to my mind; but there is something odd about this, perhaps the subject for another book; maybe Leo Stein comes into that book, though probably not.