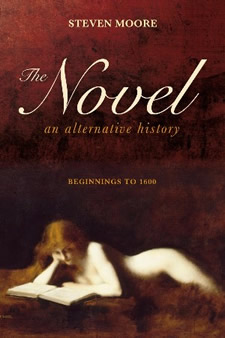 Moore’s introduction to this book is offputting. Part of the problem with Moore’s approach is that he’s treating what he’s terming “the novel” almost as if they were a set of artifacts devoid of cultural context: when you wrap this text in a book and set it next to this text in a book, you can find similarities, even if they’re separated by 2000 years. (A similarly maddening, if perhaps more fashionable, version of this might be John D’Agata’s project of describing many things as “lyric essays”. For D’Agata, almost everything is a lyric essay, even if the authors weren’t smart enough to understand this; for Moore, many of the same texts are novels.) The problem with Moore’s taxonomy is that it’s Linnean, based largely on morphology and how similar things look, rather than an evolutionary one; to Moore, a novel seems to mean a fictional narrative, though both of those words are similarly fuzzy.

An analogy might be drawn to the Metropolitan Museum, which contains a great many things (coffins, desks, jewelry, clothing, twentieth-century paintings) under the guise of “art.” The creator of a Mayan death mask, or the members of the society in which it was created, almost certainly did not see that object the same way that a Cezanne painting would have been seen by Cezanne or his contemporaries, or by the way we see that painting now. Certainly commonalities can be drawn – workmanship, originality, for example – but the reason that both of those objects appear in the same museum is historical contingency as much as anything: audiences saw that Cezanne was beautiful, and then realized that the Mayan mask was as well; in the nineteenth century, the Mayan mask would have been in the natural history museum. The art museum as it currently exists is a historical construct.

To go back to taxonomy: Moore is a lumper rather than a splitter. If something looks like a novel to him, it is; even if Nathaniel Hawthorne labeled some of his books “romances,” they’re still novels (p. 5), while Gertrude Stein’s self-labeled “novels” are also novels (p. 32). This is partially a problem of his belief that while the word “novel” is unwieldy, it can be given a single definition if that definition is his. But there’s a weirdness to his use of terminology: consider his note at the bottom of p. 32:

The “antinovel” is associated with postwar French novelists – Sartre used to describe a novel by Nathalie Sarraute – but the term was actually coined by the experimental novelist Charles Sorel in 1633.

Both Sartre and Sorel would have spoken of “l’anti-roman”; but what they would have mean by it is almost certainly different. Sartre’s introduction to Portrait of a Man Unknown uses the word with reference to Nabokov, Waugh, and Gide. This is glossed over: for Moore, all anti-novels seem to be the same anti-novel, and the possibility that the same word could be used to mean different (or contradictory) things doesn’t seem to bother him.

A larger problem with Moore’s introduction is his us-vs-them argument. “Us” is the progressive novel with a long history; “them” is the Dickensian novel. “Them” is more specifically B. R. Myers, Dale Peck (for his review of Rick Moody), and Jonathan Franzen (primarily for his terrible Gaddis piece in the New Yorker) who wish that modern novels would stop being so modern. There’s an anti-academic slant as well, as if the academics had been hiding a secret history from the masses; but it seems like what Moore is doing is trying to simply change the places of the elites and the preterite. The problem with their canon seems to be that it isn’t his canon. John Ashbery is denigrated twice for being not with it enough to like the Velvet Underground; certainly Ashbery was from an older generation (presumably Gaddis didn’t like the Velvet Underground either), but casting him as an enemy of the progressive novel doesn’t actually make sense: Ashbery championed Roussel and Kenneth Koch’s The Red Robins among plenty of other notable instances of the avant-garde novel. Unfortunately, this makes a mess: I don’t know that battle lines are that carefully drawn.

A major problem with his book is his neglect of how the market shapes our perception of which fiction is entertainment and which is avant-garde: the common history of the English novel rising with Richardson and Defoe is directly tied to the availability of mass-market editions of their work; until the mid-twentieth century, the novel was a major cultural force, at which point it was supplanted by film, television, and the Internet. The cultural function of the novel changes when other media arise; it probably isn’t coincidence that cries for a return to the values of Dickens in fiction started appearing soon after the Internet rose to prominence in American life. When the novel moves away from the cultural center, the way it’s used changes (becoming more than ever a signifier of the high-brow, or the old high-brow); similarly, long-form narrative before Gutenberg would have functioned entirely differently than a novel would have.

There’s a sense in which this maybe the argument in this book is perhaps from another time. Does it still make sense to argue about what constitutes the canon in an age when so many books are instantly available? It doesn’t seem impossible to like Ashbery, Gaddis, and the Velvet Underground all at once; however, just because Rick Moody once wrote interesting books (which seems a very long time ago now) doesn’t mean that he’s always worth defending, especially when there may be more interesting work out there. The failure to acknowledge the market hamstrings the argument as well: right now, there are plenty of self-described “avant-garde” fiction being written by MFA writers primarily for an audience of other MFA writers; the avant-garde risks becoming just another marketing genre. How avant-garde these writers might actually be is certainly up for debate; but they certainly don’t align with the lines Moore is trying to draw: being an artist in the age of accreditation is a different sort of beast. Probably there are more avant-garde novels being written now; certainly, there are more bad avant-garde novels being written now. Given this present, returning to the canon starts to seem more desirable. What’s wanted more than ever is discernment: but that’s not Moore’s project here.

4 thoughts on “steven moore, “the novel: an alternative history”, 1”