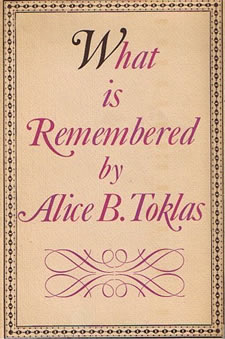 Alice B. Toklas
What Is Remembered
(Holt Rinehart and Winston, 1963)

Back to Gertrude Stein: though I’ve read her memoirs-as-cookbooks, I hadn’t previously gotten around to this, Alice Toklas’s memoir-as-a-memoir. The voice here is strange: it seems familiar, of course, from Stein’s imitation of it in The Autobiography of Alice B. Toklas where she’s describing many of the same scenes. This feels almost like an echo: at times its hard to tell if what the reader is receiving is a memory or a memory of Stein’s book. But it’s hard to tell where this voice comes from: Stein’s has been inflected on it, and sometimes Toklas’s is almost indistinguishable from Stein’s. Here, for example, is the last paragraph of of a chapter where Alice casually dismisses her roommate Harriet Levy’s religious crisis:

Sarah Stein now told Gertrude of her giving up the spiritual case of Harriet. They thought David Edstrom should undertake the case. David Edstrom was a good-looking young Swedish sculptor. He had not known anything like Harriet before, though he had known many American women in Florence where he had lived for several years. He soon told Gertrude lively stories of Harriet’s spiritual life. (p. 39)

That comma presumably wouldn’t be in Stein’s version of this paragraph: but the narration in the simple past tense slightly modified (“now told,” “soon told”), the generally simple sentences, the parallelism that begins and ends it (“Sarah Stein now told Gertrude,” “He soon told Gertrude”; “he had not known,” “he had known”) and repetitions (“David Edstrom”) and variations (“spiritual case of Harriet,” “Harriet’s spiritual life”) are familiar enough that one might almost think of this paragraph as a pastiche. But then a few pages later something like this appears, a voice which seems entirely different:

The winter commenced gaily. Gertrude during this winter diagnosed me as an old maid mermaid which I resented, the old maid was bad enough but the mermaid was quite unbearable. I cannot remember how this wore thin and finally blew away entirely. But by the time the buttercups were in bloom, the old maid mermaid had gone into oblivion and I had been gathering wild violets. The lilies of the valley, forget-me-nots and hyacinths we gathered in the forest of Saint-Germain were more delicately colored than those of California, which were more robust and even more fragrant. (p. 44)

There are differences in emphasis, of course: Hemingway only appears glancingly here, and there’s more Matisse and less Picasso. There are less celebrities in general: this is largely about Gertrude. Tchelichev is dismissed a sentence after he appears; but she will admit to liking René Crevel. The appeal of Francis Rose isn’t really explained here either. (“Georges [Hugnet] spoke slightingly of Francis. One did not blame him, Francis was a very difficult guest.”) And we do learn that though Gertrude never met Jane Bowles, she did meet Alice in Paris after Gertrude’s death. There’s surprisingly little about Stein’s books, especially in comparison to Stein’s memoirs. The American trip, fretted over by Stein in Everybody’s Autobiography, is here a complete triumph; World War II passes quickly, and Toklas’s account is close to Stein’s, if not quite as breathless.

Things do leak out, of course, that wouldn’t be in Gertrude Stein’s account: she wouldn’t mention, for example, that Sarah Stein became a Christian Scientist. Arthur Cravan shows up as “Craven . . . a very handsome Englishman who wrote a pamphlet on the salon paintings that caused a scandal and who boxed for pleasure” (p. 76). And there are minor revelations, like the appearance of this telephone:

After only a week in Paris, Ada returned to London and I went to the plays of Bernstein in which Guitry père performed. In one of them I saw one of the first portable telephones. Before that, they had always been attached to the wall. The audience buzzed with excitement as the curtain went up and revealed it. The acting was as brilliant as the lines. (p. 46)

Presumably what is being described is a table-top telephone; though of course a telephone wouldn’t seem to be particularly functional in a play, at one point it must have been new enough to cause excitement, something which must have seemed impossibly foreign in 1963. An anecdote which seems like it has to be related to Duchamp, though there’s precious little context for it:

I will assume that some assiduous art historian has tracked down the provenance of this quote and whether or not it has anything to do with Étant donnés.

And occasional moments of a relationship stand out: here, for example, Alice is made extremely unhappy by the weather at Saint-Rémy:

But Gertrude had written so well there, and so happily, and so much, that I made up my mind I would behave and not complain. (p. 122)

Here as elsewhere in the book there’s an enormous fealty to the figure of Gertrude Stein. After a perfunctory recitation of Alice’s life before meeting Gertrude, What Is Remembered is less an autobiography than it is a memoir of Alice’s time with her. The book contains a number of illustrations of Gertrude Stein in a variety of formats; there are plenty of photographs of the pair together. Only two photos in the book are of Alice alone; the first is one of a pair by Carl Van Vechten of her and Gertrude, the second by Ettore Sottsass (!), is of her alone in the rue Christine in 1951. The book ends precisely at Gertrude’s death in 1946, though it was published in 1963. There’s not as much retrospective analysis here as one might hope: the title doesn’t overpromise. The book functions as a counterpart to Stein’s three autobiographies: it can be read against those, perhaps as a corrective, but Toklas here seems uninterested in talking about anything else. It’s hard not to psychologize: clearly, this is a gesture of love, but there’s a self abnegation that’s almost too much to take.

2 thoughts on “alice b. toklas, “what is remembered””