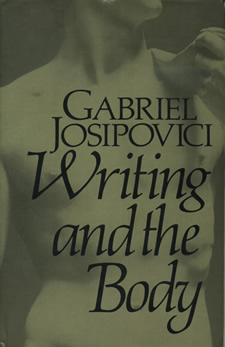 I stumbled across this in the stacks of Schoen Books last week, where I was also assured by its previous owner that it was fantastic. I don’t know if I’ve ever actually seen a copy of this book before (as far as I can tell, this hardcover edition is the only release this book had, though I certainly could be wrong); but his books are interesting enough that I buy them when I find them. This is a small book: it’s composed of four lectures, given at the University of London in 1981, which don’t seem to have been reworked for publication. Each lecture is around 32 pages, or a long essay; as they were originally given over four weeks, each builds on the previous. There’s the feeling of a work in progress: these lectures feel more like attempts at understanding a problem, rather than clearly defined arguments; this was, Josipovici writes in his brief introduction, his intent. It’s an interesting project, almost thinking aloud; it won’t appeal to everyone, but I like it.

The problem that Josipovici is considering here stems from his own career as a novelist: that to write the writer must remove him or herself from the world; writing thus might be seen to be in opposition to living. Here’s how he puts it in his preface:

While one is at work on an extended piece of fiction (and I imagine it is the same with painting and music) one has no desire to see anyone or to read anything. Everything seems to be an intrusion. It is not so much that one is afraid the book might be damaged by such contact – though that comes into it – as that nothing interests one except what one is working on. This total absorption is a blessing. But it is also a tyranny. As one nears the end of such work one longs for other voices, for the company of one’s friends, of books. One feels one has been away from the world too long and one want to integrate oneself with it, to ‘live’ again. But this is very curious. One leaves the world because one feels the need to write in order to come fully alive, and then one is glad writing is coming to an end because in the later stages it was starting to feel more like death than life. Does the act of making on which the artist is engaged bring him more fully in touch with his real self and with the world, or does it take him further away from both? (p. xiv)

This subject expands or shifts slightly to encompass the relating of writing to the body, and then to the problem of how the maker understands what’s being made while it’s being made. The first essay makes its way through Tristram Shandy, an obvious place to start thinking about the subject, but always a rewarding text to return to: here we find the beginning of the problem taken up more recently by Harry Mathews in The Journalist or Tom McCarthy in Remainder, the problem of reproducing something (a life, a memory) while still living. Sterne doesn’t get very far in relating Tristram Shandy’s life as a biography; but, Josipovici points out, he inscribes his life in the text, using similar strategies:

And just as Tristram’s nose is put together by Dr Slop with ‘a piece of cotton and a thin piece of whalebone out of Susannah’s stays’, so the book is contrived out of an old sermon of Sterne’s, the name of a character who is already only a skull in Shakespeare, some typographical tricks, and bits and pieces out of a variety of sixteenth and seventeenth century authors. (p. 7)

Tristram Shandy is a narrative of failure; but the book, Josipovici argues, does not fail itself because a novel can take failure as a subject. An interesting bit of Lévi-Strauss is pulled in:

[T]he horse does effectively give birth to the horse, and . . . through a sufficient number of generations, Equus caballus is the true descendent of Hipparion. The historical validity of the reconstruction of the naturalist is guaranteed, in the last analysis, by the biological link of reproduction. On the other hand, an axe never engenders another axe; between two identical tools which are different but as near neighbours in form as one would wish, there will always be a radical discontinuity, which comes from the fact that the one has not issued from the other, but both from a system of representations. (p. 10)

The book, Josipovici points out, is like the horse in that it does issue from biological life: it includes, especially if it is a book like Tristram Shandy, a record of its own making. But it’s also like the axe, a cultural product. Writing a book takes time; reading a book takes time:

The writer who senses the possibilities of his craft is in control of the reader of his book; he can play with time in it, stop, move off in a different direction, turn round suddenly and pounce on the reader from behind. But even as he does that time is passing. It cannot be spoken, for to speak it is to deny it; it can only be felt. (p. 29)

From Tristram Shandy in the first essay, Josipovici moves on to Shakespeare and a consideration of how time works in Othello in the second. The third essay wanders, starting with Schoenberg’s Moses und Aron, spending time with Doctor Faustus, Proust, and T. S. Eliot, on through Dante, Borges, and Picasso. In this essay he wonders broadly about the question of quotation: how words can be (and, in a sense, have to be) borrowed from others. Language comes from others, like Lévi-Strauss’s axes; the modernist problem is partially one of finding one’s own voice in a sea of others. In the novel, this becomes the problem of separating the voice of the characters from the voice of the author:

But today, because we have at last realised that a work of art is not natural, like a horse, but part of a system of representations, like an axe, we can see that this notion of an artist or an author was a myth, perpetuated by a whole ideology of the subject. We know now that the artist is a maker. He puts his material together for the sheer pleasure of it, and any relation it may have with the real world is purely coincidental. A fortune-teller needs to know what the cards mean, says Robbe-Grillet, a bridge-player only how they are used. The artist is a player. (p. 91)

But Josipovici is uneasy with this definition and suggests a refinement:

What I have been suggesting today is that the modern artist, recognising the impossibility of speaking in his own voice, is indeed a maker; but what is important about his work is not that he makes an object, or plays a game, but the sense he conveys of the act of making itself. (p. 91)

The final essay, “A Bird was in the Room,” deals with Kafka’s final notes, texts that might not be linguistically interesting, but which the reader finds compelling because they are written by a man who was soon to die: we can’t help but impute meaning into gnomic statements like “A bird was in the room” or “A lake doesn’t flow into anything, you know” when put in that context. The notes possess authority because they are last statements: the death of the author gives them meaning.

This is a beautiful book, not so much because it makes an argument but because it’s a record of careful thinking which should be returned to. Trust is on my bookshelf; probably I’ll read that before getting to Whatever Happened to Modernism, descendent, in a sense, of this book.

3 thoughts on “gabriel josipovici, “writing and the body””