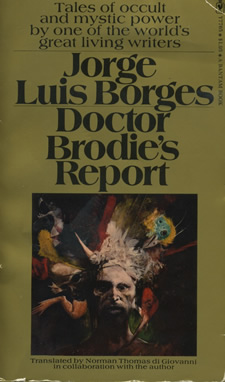 Continuing my re-reading of Borges: this is the original translation of his penultimate volume of short stories, here published as a lurid paperback while he could still be referred to on the cover as “one of the world’s great living writers.” It’s odd, somehow, to think of reading Borges while he was still alive, especially when he could have been read in paperback; it seems like Borges has always been dead, his corpus of works petrified and preserved, a feeling encouraged by generally seeing him now in the context of his complete fiction, which one tends to assume is a consistent whole. Borges in paperback seems like something different: this collection of short stories can be judged as a book. It’s strange to realize that, chronologically, the religious fantasia of “The Gospel According to Saint Mark” is might be seen as reminiscent of Gaddis’s The Recognitions rather than the other way round. It’s also odd to realize that at the point in time when this was published Cortázar was publishing better collections of Borges-influenced short stories.

The two stories that I remember from this are the title story and “The Gospel According to Saint Mark,” which I think I re-read a couple years ago for reasons I do not remember. Those two, as it turns out, are the standouts of this volume; as with The Book of Sand, this is decidedly minor Borges. The majority of the stories here do not come off as especially Borgesian, something those in The Book of Sand would actively attempt: here, there’s little preoccupation with paradox, and most of these are almost straightforwardly realistic, albeit depicting an imagined Argentina (and Uruguay – there’s a lot of Uruguay in this book) that may or may not have existed. There’s a great deal of knife-fighting, and if you’re not interested in knife-fighting much of this book may be lost on you. In his introduction, Borges notes that he was attempting to mimic the late short stories of Kipling, which I haven’t read; maybe some brave soul out there is making the case for Kipling today, but this seems like a strategy not likely to win many admirers. These stories of Kipling, he declares in his preface, “doubtless surpass” those of Henry James and Kafka; they are “laconic masterpieces” conceived when young but written when old. Henry James, meanwhile, is explicitly pastiched in “The Duel”; but the characters in the story, ostensibly about two female painters in Argentina of the 1960s, seems ludicrously unbelievable, as might perhaps be expected to be the case for a blind man writing about contemporary art. This might not be so bothersome if the story weren’t so mundane and the characters didn’t seem like they could have been borrowed, without changes, directly from James: perhaps Borges is trying to claim that Buenos Aires in the 1960s was the same as Boston or London in the 1880s, which seems bizarre to the point where this reader, at least, lost faith in the writer.

What might be most interesting about this particular book is the translation: this is the original translation of this book, which is out of print. Penguin evidently brought out a version of this; they’ve replaced it with the Andrew Hurley version from the Collected Fiction. This is something of an odd choice, given that this particular edition was translated with the collaboration of Borges: it includes a forward cosigned by Borges and di Giovanni, as well as an afterword by Borges that don’t appear in the Collected Fiction; I assume they don’t appear in the new Penguin Brodie’s Report. The foreword explains how this volume came to be:

One difference between this volume and the last lies in the fact that the writing and the translation were, except in one case, more or less simultaneous. In this way our work was easier for us, since, as we were always under the spell of the originals, we stood in no need of trying to recapture past moods. This seems to us to be the best possible condition under which to practice the craft of translation. (p. viii)

It’s odd that this translation should appear to be deprecated; as a translation, I think it’s substantively better than the Hurley version. (As I don’t have a Spanish edition, I can’t make any arguments about which is more correct; but given Borges’s seemingly direct involvement in this one, it seems like it would be difficult to argue that the earlier translation swerved from Borges’ intention.) Compare the final paragraph of “The Gospel According to Mark,” first in the Hurley translation:

The three of them had followed him. Kneeling on the floor, they asked his blessing. Then they cursed him, spat on him, and drove him to the back of the house. The girl was weeping. Espinosa realized what awaited him on the other side of the door. When they opened it, he saw the sky. A bird screamed; it’s a goldfinch, Espinosa thought. There was no roof on the shed; they had torn down the roof beams to build the Cross. (p. 400 in Collected Fictions.)

The three had been following him. Bowing their knees to the stone pavement, they asked his blessing. Then they mocked at him, spat on him, and shoved him toward the back part of the house. The girl wept. Espinosa understood what awaited him on the other side of the door. When they opened it, he saw a patch of sky. A bird sang out. A goldfinch, he thought. The shed was without a room; they had pulled down the beams to make the cross. (p. 13)

Neither of these is without its infelicities: I don’t entirely understand why di Giovanni would use “mocked at him” rather than “mocked him”; “Bowing their knees” is a little strange; and “the back of the house” is better than “the back part of the house.” But on the whole, the di Giovanni seems much better to me: the “of them” in the first sentence seems extraneous; “stone pavement” is better than “floor”; “mocked” is better than “cursed”; “shoved” better than “drove”. “The girl wept” seems better than “The girl was weeping” as it brings to mind “Jesus wept.” The italics for Espinosa’s thought is unnecessarily distracting, and di Giovanni’s handling of these two phrases works better. Goldfinches don’t “scream,” they “sing.” And the capitalization of “Cross” makes it seems like a machine to be “built” rather than something made by human hands.

There are numerous differences between these two editions, some seemingly more serious than others. In the Preface, for example, “The Gospel According to Mark” is attributed to “a dream of Hugo Rodríguez Moroni” in the di Giovanni but “Hugo Ramírez Moroni” in the Hurley; a Google search reveals Spanish hits for both, and a note in Hurley suggests that he hasn’t found an antecedent for this Moroni; in the next paragraph “Paul Groussac” in the di Giovanni” turns into “Paul Grossac” in the Hurley, which makes one wonder. David Brodie, protagonist of the title story, loses the “D.D.” that he’s given in the di Giovanni translation; perhaps Hurley decided that he wasn’t a real doctor. In the same story, a book is cited in di Giovanni as “one of the volumes of Lane’s Arabian Nights’ Entertainments (London, 1839)”; in Hurley this becomes “the first volume of Lane’s translation of the Thousand and One Nights (An Arabian Night’s Entertainment, London, 1840). A few sentences later in the story suggests the difference in tone – first the Hurley:

Their food is fruits, tubers, and reptiles; they drink cat’s and bat’s milk and they fish with their hands. They hide themselves when they eat, or they close their eyes; all else, they do in plain sight of all, like the Cynic school of philosophers. (p. 403)

Di Giovanni’s version of the same:

They take their nourishment from fruits, root-stalks, and the smaller reptiles; they imbibe the milk of cats and of chiropterans; and they fish with their hands. While eating, they normally conceal themselves or else close their eyes. All other physical habits they perform in open view, much the same as the Cynics of old. . . . (p. 135)

I like di Giovanni’s version much better, not least because he uses “chiropterans” rather than “bats”; but his version feels more like the ersatz nineteenth-century document that this story purports to be. Perhaps it’s less accurate; but it reads much better than the current translation. I don’t think this is an essential volume of Borges, but if it is to be read it deserves to be read in the original translation.