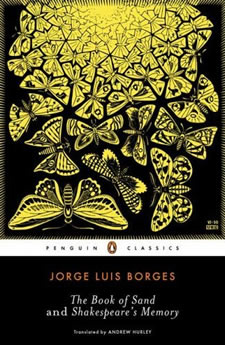 One of the happy accidents of my youth was discovering the short stories of Borges, in the old Dutton editions translated by Norman Thomas di Giovanni, in the Rockford Public Library. This undoubtedly had something to do with his name being near the start of the alphabet; still, good luck is good luck, and I made my way through all the Borges they had, as he’s exactly the kind of writer a certain sort of high school student could get extremely excited about. The books I remembered liking most were, for whatever reason, the late ones: The Book of Sand and the one that was then titled Dr. Brodie’s Report (now, having lost its rhythm, retitled Brodie’s Report). I’ve had a copy of the hardcover Collected Fiction for a while; but aside from dipping into that for reference from time to time, I don’t think I’ve really read Borges since high school. Seeing The Book of Sand displayed at a bookstore in Amherst, the first time, I think, that I’d seen a copy of the book on its own since first reading it, I bought a copy; it had been a long time, and I was curious whether there was something to be gained from re-reading Borges. This edition is, as it turns out, exactly the same as the text in the collected edition; it does add a seven-page introduction by the translator.

I don’t know. Re-reading Kafka a few years ago I was struck by how much I’d missed when I was in high school because I was so taken by the central conceits of his narratives: there are things that are more lastingly interesting than absurdity. The conceits of some of these stories are still familiar (others I’d forgotten entirely); while it’s nice to renew acquaintance, I found myself wondering about the execution, whether the concept of the story might not be more interesting than the story itself. Perhaps this is minor Borges: “The Other,” “The Congress,” and “The Book of Sand” seem to be fully fleshed out, but some of the others come across almost as Borges-by-numbers. Here’s a tiger; here’s a knife-fight; here’s a version of Gnosticism. It’s hard to tell what would have impressed me so much about this book when I was 15: read now, this seems very much like the work of an old man, an old man who comes across as a crotchety reactionary with some frequency. I don’t know that I’ve ever read the four uncollected stories in Shakespeare’s Memory before: “Blue Tigers” is pleasant enough, if not necessarily deep, but I don’t know that I’ve been missing out by not reading them before now.

I’m not sure about this translation; something seems off to me, and I can’t quite tell what it would be. The language doesn’t grab me as I remember it doing, and I wonder whether that’s due to the new translation or if it’s because I’ve changed as a reader; maybe it’s both. (I do find myself arrested by the first sentence of “The Other”: “The incident occurred in February, 1969, in Cambridge, north of Boston” – has anyone ever thought to explain Cambridge by saying it’s “north of Boston”?) I don’t love the language; a few times, I found myself confused about what was going on, though whether that was due to unwieldy syntax or a bus from Amherst with shoddy breaks I’m not entirely sure. I’d like to look at the di Giovanni version of The Book of Sand: but somehow that’s become bizarrely expensive: the cheapest used paperback on Amazon goes for $26, which doesn’t make a lot of sense. The new translation does seem to have had some machinations behind it, which might be hinted at by the fawning appreciation of Borges’s widow in the introduction, which doesn’t explain directly why a new translation was called for. A piece by J. M. Coetzee in the NY Review of Books explains some of this in diplomatic fashion, and points to problems with Hurley’s other translation of Borges. The two books here Coetzee dismisses: “There is much tired writing in them; they add nothing to his stature”; probably, when taking Borges’s work as a whole, this is true, though I’m not entirely willing to sign off on that.

I do wonder about the choices made in the notes: the notes explicitly set out to only notate what an Argentine reader would have known in the stories, but a great deal is thus left out. “Ulrikke,” for example, has an epigraph from the Völsunga Saga: it’s given as “Hann tekr sverthis Gram ok leggr i methal theira bert,” though it should be “Hann tekr sverðit Gram ok leggr í meðal þeira bert”: this is left untranslated, though the reader who goes to find out what exactly that means will find it does bear directly on the text, as does the reference to De Quincey at the start of “The Rose of Paracelsus” which Hurley does explain. Read with the Internet at hand, many of the unannotated references are easily explained (John Wilkins, for example, who comes up a few times); but one wonders why an editor didn’t do this. The lack of notes comes off as deliberate obscurantism: maybe that’s something that I would have liked when I was young, but it does little for me now.

It’s possible that what I liked about this book when I was younger was the sheer novelty: simply how different his writing was from anyone’s that I’d previously encountered. The idea that things can be entirely different from what you’re used to is powerful when you’re young; but that revelation isn’t necessarily one that leads to better reading. Paradoxes are exciting when first encountered: but when encountered again and again, as in a book of stories, the device loses force. There are some stories here worth going back to; read individually, they’d almost certainly fare better. I’ll track down a copy of the di Giovanni Dr. Brodie’s Report: I’d like to see how the old translation stands up.