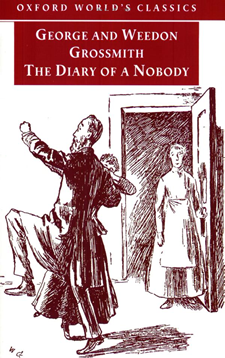 George & Weedon Grossmith
The Diary of a Nobody
(Oxford World Classics, 1998; originally 1892)

Somehow I have always mentally confused this book with W. N. P. Barbellion’s Journal of a Disappointed Man, which isn’t really a confusion that makes any sense at all, except that they’re both British and diaristic, and the mental pile of British diaries is not something that I tend to think very much about for whatever reason. So I picked this up thinking that it would be like Barbellion, which of course it is not even a little. Being vaguely astonished at how I could have managed not to have read this book, I did; probably it is a book I would have liked more if I’d found it in high school. This particular edition is an Oxford World Classics; I found myself most interested in the copious selection of notes, which range from the banal:

to the thoroughly confusing:

113 Brooklyn Bridge: designed by John Augustus Roebling and largely built by his son, Colonel Washington Roebling, between 1869 and 1883. It is 1,595 feet long, and spans the East River from Brooklyn to Manhattan Island, New Jersey.

One is reminded here of Kafka’s Amerika, where Boston is across the bridge from New York. Some of the other notes are, admittedly, useful; but one wonders who this particular edition is for: ignorant students who want to know about Victorian hijinks? Is this book assigned in class? I particularly like the Brooklyn Bridge note, which takes the opportunity of a mention in the text (a timid man, one character says, will never build a Brooklyn Bridge or an Eiffel Tower; the latter is dutifully footnoted as well) to hold forth on the history of the Brooklyn Bridge, ending, of course, in nonsense. I have a weakness for editorial apparatuses, especially when they seem to have slipped all control.

I don’t know that I have anything particularly interesting to say about this book; it’s a satire of suburban British middle class life in the late nineteenth century, and those more knowledgable than I could discern what, exactly, the attitude that it takes is. Charles Pooter seems to be presented as a buffoon; but he is also, in his way, a solid citizen, and it’s difficult for me to know, at this distance, whether he was intended to be read positively or negatively. Part of my confusion is the problem of not knowing how the intended audience of this book was: it would make a difference, for example, if the book were intended to be read by the London smart set or if it was marketed to those who might be considered Pooter’s peers, whether the book was laughing at or with its protagonist. Here, for example, Pooter finds himself in a quarrel with one of his son’s friends, Burwin-Fosselton, who fancies himself a comedian and has been imitating a famous actor for the company’s amusement:

Once we had a rather heated discussion, which was commenced by Cummings saying that it appeared to him that Mr Burwin-Fosselton was not only like Mr Irving, but was in his judgement every way as good or even better. I ventured to remark that after all it was but an imitation of an original.
Cummings said surely some imitations were better than the originals. I made what I considered a very clever remark: ‘Without an original there can be no imitation.’ Mr Burwin-Fosselton said quite impertinently: ‘Don’t discuss me in my presence, if you please; and, Mr Pooter, I should advice you to talk about what you understand’; to which that cad Padge replied: ‘That’s right.’ (p. 71)

How can this be unpacked? This is, of course, ostensibly Pooter’s diary; he is trying to present himself in the best possible light. Burwin-Fosselton has previously been established as ridiculous and pretentious (he insists on being referred to as “Burwin-Fosselton” rather than “Fosselton”) even outside of Pooter’s taste; Pooter doesn’t generally understand the humor of his son Lupin and his friends, which doesn’t seem to be of a particularly high caliber. Maybe the original remark of Cummings is a joke misunderstood by Pooter, who takes the suburban view that an original must be better than a copy; Cummings, of course, comes from exactly the same environment. Maybe youth have always tried to be edgy (advancing counterintuitive ideas) and always ended up sounding ridiculous. Pooter’s response isn’t especially clever, of course: he’s pointing out the obvious and assuming a consequence (that because a copy requires an original, the original must be better than the copy) that doesn’t have to follow (though it generally does). Burwin-Fosselton might sense the assumption but understands that it’s not worth arguing about. Logic is boring to the youth; they are impertinent. Nobody here comes off especially well: it’s a quarrel of idiots.

Pooter’s relations with his twenty-year-old son, who has ditched “William,” his given first name, for “Lupin,” his middle name, perhaps in an effort to rile up his father, are complex. Pooter is a straight arrow: he’s a solid citizen, well behaved, does his work as he’s supposed to. Lupin is rebellious and doesn’t do work he doesn’t like; he takes risks (he loses a great deal of money with poorly thought-through investments) and generally hasn’t turned out quite the way his doting father would have liked. Lupin is more thoroughly a capitalist than Pooter is: given a place at Pooter’s firm, he throws over stability for a chance at more money, which, at the end of the book, seems to have been a smart move. Lupin is reckless and stupid; Pooter notes this with chagrin. Lupin disregards Pooter’s judgment to his own gain: by being flippant, he ends up with a better job than his father has, and at the end of the book, Lupin seems to be about to marry up. Pooter’s way of life won’t work for him; but Lupin’s way seems wolfish, even when presented through his father’s rose-tinted lenses. The reader finds Pooter ridiculous; but given the alternative, we sympathize with him.

2 thoughts on “george & weedon grossmith, “the diary of a nobody””