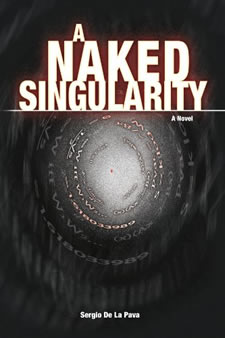 Scott Bryan Wilson told me that I should pick this book up (he’s reviewed the book here), so I did, though it did sit on the shelf for a while. That it’s published by Xlibris rings warning bells, of course, especially a large (almost 700 pages) book, which makes one wonder about the editing without opening it. But one can’t in good conscience accuse the big houses of over-editing these days. And one has to like a book which has a promotional website with an “about the author” section that simply says “Sergio De La Pava is the author of A Naked Singularity.”

The book is narrated by one Casi (Spanish: “almost”; Italian: “cases,” not in the legal sense, but both are applicable here), last name left blank, a 24-year-old public defender in New York. Casi is something of a wunderkind, having maintained a perfect record; over the course of the book, he loses his first case and is brought low by the injustice of the world. The year is 2002; he lives in Brooklyn Heights with a set of college students who seem like they might be a television-mad version of the brothers Karamazov. His family is Colombian; a cousin has been put away for selling hot dogs without a license. The city is obsessed with a pair of seven-year-olds who have murdered an infant; there’s a blackout. A mentally impaired prisoner, failed by the legal system in every possible way, is on death row in Alabama. And there’s a heist, which doesn’t go according to plan: crime is imperfect. Through it all is interpolated a recent history of boxing, having as its center the career of Wilfred Benitez.

The work is meant to speak for itself; there’s something comforting about being back in this space, though the era of the anonymous author has all but vanished. A Naked Singularity, however, loses no time in making clear its antecedents. The book this most resembles is William Gaddis’s A Frolic of His Own, similarly entangled in the legal system; that book’s celebrated first line (“Justice? – you get justice in the next world, in this world, you have the law”) might serve as a theme for this one. De La Pava also shares Gaddis’s knack for unattributed dialogue. There’s an early invocation of the Pynchon of Mason & Dixon: “Now several acorns had successfully flown their sorties, cutting through the frigid air to form interrupted parabolas, when I began to conceive the inconceivable.” (p. 56) Like Gaddis’s and Pynchon’s books, this one is bursting at the seams: court transcripts, letters, and all manner of legal documents find there way in. There are cartoonish names, like in Pynchon, but the clownishness never fully escapes. The language is hyperactive and breathless and might bear the stamp of David Foster Wallace: the word “television,” for example, is always capitalized. But Wallace’s imprint might be found less in the language and more in the book’s deep sense of morality: De La Pava shares Wallace’s concern with how difficult it is to live in a flawed world. Bartleby is invoked, not surprisingly; Dostoevsky is never quite mentioned, though his presence floats through the book (Crime and Punishment and The Idiot, as well as the aforementioned Brothers Karamazov).

It becomes clear to the reader that this isn’t an ordinary work on page 14, when Casi goes off on a two-page digression about the history of Miranda rights, culminating thusly:

The ACLU grabbed the case and 976 days later they were in front of the court that never gets overruled with John Flynn saying, and this is a direct quote (no it isn’t): “look dudes, and I refer to you thusly because this is way pre-O’Connor/Ginsberg, your Fifth Amendment deal is only protecting the rich and powerful: those who are brainy enough to know what their rights are or who have the dough to rent a lawyer.” The Warren Supremes actually agreed and, in the kind of decision that makes maybe five people happy, held that before future police could torment some illiterate sap who nobody cares about into confessing his sins, real or imagined, they would have to inform him of certain rights not covered in your average eighth-grade Social Studies class. (p. 15)

The voice here is what’s astonishing: informed but colloquial, flippant but engaged (there’s a tenderness in “some illiterate sap who nobody cares about”). We can tell exactly what the speaker thinks about the justice of the law (“sins, real or imagined”); but his approach is also pragmatic: this is the America that he has to live in. The breathlessness drives the reader on: while the book is long, it’s never imposing. But most important is the quality of empathy: Casi cares about the illiterate saps in a believable way. This is a book deeply concerned with the preterite: those who don’t have the resources to get themselves represented by others. It’s refreshing to find a recent New York novel that doesn’t bother to mention Williamsburg or Park Slope; the Upper East Side or Upper West Side might be mentioned in passing, but the Village, the East Village, Chelsea, the Lower East Side, the neighborhoods of New York that are seen in movies and literary fiction are absent from this book. There’s plenty left over; but we don’t usually read this.

And this also stands out in that it’s a novel of work: Casi is a public defender, and spends most of his time at his job. The job isn’t lionized here: the protagonist is actively trying to be a good man, but he is decidedly not a hero by virtue of his work alone: the other occupants of his office are noticeably flawed, as he is. The criminal justice system is deeply flawed, as are the people that Casi is given to defend; but it is what there is, and Casi does the best that he can with them. But the job has an inexorable impact on him. This knowledge of one’s own imperfection in the face of the world expands to take over the book: Casi might be any bright young person coming to grips with the world: the heartbreaking career of Wilfred Benitez is made to serve as a sort of parable for the dissolution of dreams.

I’m also struck by how the book, comical as it often is, never has recourse to anything resembling magical realism, for my money one of Pynchon’s primary flaws. The world is often exaggerated in this book – as it well might be when described through a first-person narration – but the world described is always recognizably our own, with all of its horrific flaws. There’s a seriousness underlying this book’s comedy: the book draws its power from the outside world. The joking about the media circus around dead baby Tula that spans the book is funny because we know how sadly real this sort of thing could be.

One can’t help wondering about the author: has he actually worked as a public defender as the abundant legal detail – to say nothing of the clear feeling for the job that comes through – suggests? The effusive acknowledgments page thanks the NYCDS; and a cursory search of Google suggests that someone of the same name was working in legal aid in New York around the time the book is set. A more important question, though: how did the publishing industry fail this book? Someone should be paying Sergio De La Pava for the right to publish him; that work of this caliber is being published by a vanity press is depressing. The publishing industry prides itself on being a filter saving us from the mounds of garbage that are annually written; but honestly, this book could advantageously be pitted against almost any novel published in the past ten years by the big houses – especially the endless raft of New York novels. This is a book that deserves to be read more widely; in a better world, people would be reading this rather than Freedom.