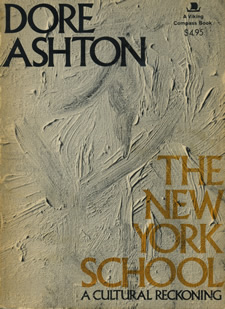 My art history is the capricious one of the autodidact: I’m not sure that I’ve ever read a proper history of the abstract expressionists in New York, though I’ve read the obligatory work of Clement Greenberg and Harold Rosenberg, and I’m reasonably familiar with New York before and after them, and the Surrealist work taking place alongside them. The abstract expressionists seem so big and cartoonish that actually reading a history of them almost seems beside the point: everyone knows the stories. My first roommate in New York was a painter taught by a (considerably elderly) painter who’d been taught by Hans Hofmann; we went to the Cedar Tavern and I heard about how the original location must have been so much better. It’s hard to muster up desire to go see the big show now up at MoMA: we’ve seen even revisionism many times over now.

Dore Ashton’s The New York School is, for me at least, a useful corrective. Ashton’s work is a cultural history: not so much a study of art but a study of the conditions in which art happens. This, it turns out, is interesting: we tend to forget how things have not always been the way they are now. Early in this book (in a section on the history of the WPA) the state of the arts in the United States in the early twentieth century is pointed out:

The Hoover administration did allocate some funds to states that initiated their own programs, although President Hoover himself, like most of his fellow citizens, gave no weight to the arts. Henry Billings, an artist on the mural project, regards the Roosevelt regime as the first to be even faintly aware of the arts as a necessary part of civilization, and points out that when Hoover answered an inquiry by the French government for an exhibition to include American art, he said that as far as he knew there were no decorative arts in the United States at this time. (pp. 44–45)

This book is as much a history of philistinism as it is one of art: and that’s really what makes it interesting to me. (One might pair it with Martin Duberman’s history of Black Mountain College, which it complements nicely; though with a handful of exceptions – Cage, Rauschenberg, Richard Lippold – there’s not a lot of overlap in the cast of characters.) History is written by the winners; after a century of that, it’s not hard to immediately think of a couple of major artists (Edward Hopper and Georgia O’Keeffe, say) active in the 1920s; MoMA would have just opened in its first incarnation. One forgets, however, that the position of the arts in this country has always been embattled, and Ashton does a fantastic job of tracing this out, closing with the description of a loft party in 1961, names carefully removed:

Many of the old restless spirits were present, but then, so were some 800 others, including collectors, dealers, museum officials, and assorted functional members of a greatly enlarged art world. They were there by written invitation and checked carefully at the door by armed Pinkerton men. Once upon a time, a famous poet remarked, Pinkerton men had been used to chase disreputable elements such as artists. Now the artists do the chasing. It is not easy to understand what had happened. How had this extravaganza come to be, and why? Partly the answers were circumstantial. Ten years before there had been only about thirty respectable art galleries in New York. By 1961 there were more than 300 managing between them to stage close on 4,000 exhibitions a year. This unprecedented growth had blurred the outlines of an art community and caused confusion in the ranks. ((p. 229))

The political undertones here aren’t accidental: Ashton’s politics are made abundantly clear in the book. This is a book written in the early 1970s, when it seemed like things could conceivably change for the better if the lessons of the past were understood. Ashton understands, however, that the forces capable of acting in a small group of unknowns are very different from those of a fully commercialized community. The abstract expressionist explosion happened in part because the core group was small and relatively isolated from outside pressures: this is classic evolutionary theory. If no one’s going to buy your paintings, you can paint whatever you want: it’s not a recipe for success, but it does make it possible.

Ashton’s book does seem dated in certain respects: while she seems to have relied on Lee Krasner for material, she doesn’t really pop up as a subject; women in general are almost entirely missing. Maybe it’s the time she’s covering – Louise Nevelson, Louise Bourgeois, and Joan Mitchell wouldn’t really come into prominence until later in the 1950s and 1960s – but that absence seems jarring. Edwin Denby, Rudy Burkhardt, and Frank O’Hara lurk in the margins of the book, and one senses that Ashton would have liked to bring them further forward – the first photograph of the book is a full-page Burkhardt photo of Denby – but this is mostly a book about straight white men. But I speak with the hindsight of thirty-seven years; on the whole, Ashton is more right than not, and a lot that we’ve forgotten is in this book. The description of how Joe McCarthy went from real estate to being a reactionary, for example, seems eerily prescient:

Old reactionary tactics were revived, and a zealous, ambitious politicians called Joseph McCarthy saw the value of renewing the red scare that had been used before to stave off social reform. It is significant that McCarthy got his start in the field of real estate. Those who had hoped to institute a new era with good public housing and liberalized city-planning were the natural enemies of speculators. McCarthy consciously climbed to political prominence by attacking government housing projects. His first target, in fact, was the Rego Park Housing Project, containing 1,424 units for veterans. He visited the project in 1947 and then called a press conference to denounce it as “a breeding ground for Communism” (at that time he represented the pre-fabricating industry). It was brought to his attention that public housing was not a good issue for him in view of the veterans and the housing shortage, and so he moved into greener pastures, such as the universities, Hollywood, and the cultured classes in general. (pp. 174–5)