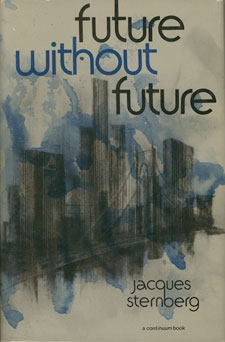 The Museum of the Moving Image has been having an Alain Resnais retrospective, where I finally saw Je t’aime, je t’aime; the program notes for that film pointed out that it had been written by Jacques Sternberg, “the French Philip K. Dick.” I didn’t remember ever having heard of Sternberg; this book, a 1974 translation of 1971’s Futurs sans avenir seems to be one of two by him available in English (the other being 1967’s Sexualis ’95). Future Without Future appeared as part of Seabury’s Continuum series of foreign science fiction; also listed in the series are works by Stanisław Lem, the Strugatsky brothers, and Stefan Wul, all of whom, like Sternberg, seem to have had their books turned into arty movies. An English Wikipedia page gives some background on Sternberg’s life and work in entertaining prose:

Sternberg, a very apt helmsman, owned a diminutive 12 Ft dinghy (Zef class, excellent for day cruising but slow and utterly unfit for racing) and often undertook arduous coastal treks, even in comparatively bad weather. An anarchist at heart, he rejected organized regatta and racing – Not unlike Bernard Moitessier, the famous ocean vagabond – and wrote a biting satire of yachtsmen, sponsors and yacht clubs, in his erotic-nautical novel Le navigateur published at the peak of Eric Tabarly’s success. Dinghy sailing means living a very close relationship with the sea and it is one of the keys to understand the important place of the sea in Sternberg’s work, specially in what may arguably be his best novel Sophie, la mer et la nuit.

This is not helpful for this book, which contains only passing mention of the sea. The French Wikipedia is a bit more helpful; there we learn that:

Perhaps he will go on being one of the most prolific novelists of the twentieth century; however, he did die in 2006. One learns there that he was part of the Panique group with Fernando Arrabal, Roland Topor, Alejandro Jodorowsky, and Olivier O. Olivier; a fair number of his works still seem to be in print in France despite his general disappearance in English.

Future Without Future collects a novella (“Fin de Siècle”) and four stories. The novella presents a man’s diary for 1999: he lives in a dystopian Paris clogged with cars and soot run by an all-powerful state. Everything is regulated; there are fines and impositions for any misstep (he is sentenced to play tennis two hours a day for a few months), even down to private life (he has a state-mandated mistress and child; the state gives out adultery cards). He spends his day counting punctuation at a state publisher; his job is futile, as all jobs are futile, but there is no escape. Love turns up, predictably enough; but as the story progresses, it becomes clear that the government’s manipulations of time (declaring the Sunday will be skipped) are not in name only, as might be expected, but real; the government’s mismanagement of time causes the universe to collapse.

The stories show Sternberg to be preoccupied with the world of the bureaucrat: the drudgery of work is very real in these stories. In “Vacation,” a man is forced to go on vacation (which also happens in “Fin de Siècle”); he takes a jaunt by rocketship to the boring world of his childhood, but on his return he is informed that their rocket will need to be parked in orbit for the next year; no worry, because his work will be sent to him. “Very Sincerely Yours” starts out as a report of an absurdist joke (a bored functionary decides to write letters about his own anomie to the people he is supposed to be corresponding with on official business) which turns into a weird fantasia (his correspondent turns out to be an alien living in a parallel world; the alien infects the world with a virus that will eventually cause humanity to shrink to the height of twenty-eight inches, the height of the alien race, so that they might be more easily conquered in a few hundred years). It’s presented in epistolary form; as it begins it might be the response of a latter-day Bartleby so utterly alienated by capitalism that he has no real name (he signs with the name “JR, Director,” though his boss, of course, can’t be bothered with anything as quotidian as answering letters).

Bartlebys take over the world in “Future Without Future,” the last story in the book: in that, the societal revolutions are telescoped forward to a world where the young (“the Fatigued Generation”) refuse to do anything, which stops the Vietnam War and brings about a peaceable planet. Sternberg puts himself in the vanguard of their cultural revolution:

But it is literature, still, which evinces the most spectacular reversals. For two or three years now, the books of Sagan, Druon, Kessel, Troyat, Dutourd, Mallet-Joris, Daninos, or any of the best sellers of the 70’s have not sold a single copy. On the other hand, a vast public of indolent and disgusted readers have flocked to the work of heartsick professionals such as Céline, Beckett, Michaux, Sternberg, Bierce, Kafka, Cavanna, Benchly, and above all Cioran, whose Précis of Decomposition sold five hundred copies between 1949 and 1975, but enjoyed sales of ten million in 1980, and has established itself as the new Bible of modern times. By the same token, no publisher has managed to market a book on management or marketing, those moth-eaten themes of 1970, or any book of poetry, history, politics, sociology, or metaphysics. Those thought-provoking bugbears have finally bored, disgusted, and fatigued the public which still reads. That is to say, the new generation alone. (pp. 193–4)

To Sternberg’s list of familiars, one might add Anna Kavan, whose tone is sometimes very close to this book; I suspect that the argument could probably be made by one more familiar than I that Sternberg presages Houellebecq. Sternberg is not, on the evidence of this book, the French Philip K. Dick: there is no secret meaning to be found in his world, only drudgery, entertainingly presented.