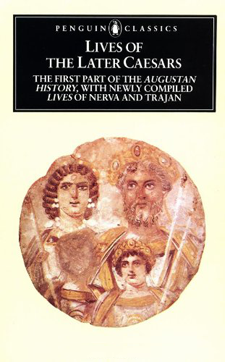 Lives of the Later Caesars: The First Part of the Augustan History, with Newly Compiled Lives of Nerva and Trajan
(edited & translated by Anthony Birley)
(Penguin Classics, 1976)

I originally picked up Suetonius because I wanted to read about Septimius Severus; but of course Septimius Severus wasn’t one of the Twelve Caesars. This book is an odd continuation of Suetonius, another series of lives of the Caesars: editorially, this consists of the first half of the Augustan History along with two newly written lives of Nerva and Trajan, whose lives seem to have fallen out of the manuscripts of the Augustan History. Only the first half, alas, of the Augustan Manuscript is presented here: Anthony Birley’s introduction explains that “after the Heligabalus, which itself descends into fiction at a point about half-way through, the remainder of the Augustan History is of very dubious quality.” This is, of course, exactly the sort of thing that I find myself interested in in preference to real history; but half of the Augustan History is here, and the rest is easily read online. My knowledge of the classics is unapologetically slanted toward the fictional; some day I’ll rectify this, but not yet. Herodotus waits in the to-be-read pile; I still haven’t given the Iliad a proper reading, though I’ve read more Greek romances than anyone should. Books like this one appeal more: maybe because they’re clearly minor literature.

This is a strange book. The lives of Nerva and Trajan are the concoctions of Anthony Birley, written as a pastiche of Suetonius and the Augustan History, heavily footnoted with sources. It’s hard to know how to take these: they’re not necessarily history – a flaw which the Augustan History as a whole might be said to suffer from – but neither are they historical documents, a category which could include such fabulations as the Augustan History. These lives are primarily fact-based, but one runs into passages like this one in the life of Trajan:

It was a fault in him that he was a heavy drinker and also a pederast. But he did not incur censure, for he never committed any wicked deed because of this. He drank all the wine that he wanted and yet remained sober, and in his relations with boys he harmed no one. It is reported that he tempered his wine-bibbing by ordering that his requests for drink should be ignored after long banquets. (p. 47)

Footnotes after the third and fourth sentences point to Cassius Dio and Aurelius Victor: we can assume that “it is reported” refers to a passage in Aurelius Victor. But it’s hard to tell about the judgment in the first sentence: did Cassius Dio think that those were Trajan’s faults? The factuality of the second sentence can be judged by the historical record; the third is probably relying on Cassius Dio’s reporting of the facts, though it seems entirely possible that this is Birley’s interpretation. The effect is something like a Renaissance fair, but also somewhat like attempting to understand history by reading Wikipedia; maybe the argument could be made that it’s a good preparation for the rest of the Augustan History.

The Augustan History is ostensibly a compilation of works written by six different authors, which were compiled at around the age of Constantine. This is apparently a fiction, propagated to make it seem like the histories of the emperors were written more or less contemporaneously with their rule; Birley argues in his introduction, following Hermann Dessau, that the work was composed by a single author writing at the end of the fourth century, who cribbed much of his material from other sources, some of which still survive and some of which have passed away. There’s also a fictional overlay, with the various fake narrators explaining themselves, their purposes, and to whom they were ostensibly writing. Birley takes a hard line with this, and peppers the text with footnotes explaining, over and over again, that “this is fiction” and “this is inaccurate,” with the idea that if the fictional layer is peeled away some truth might be revealed. My interest in truth about the Roman empire is rather low; read as fiction, the book is entertaining.

“Married women” are often referred to as a class: Marcus Aurelius, for example, is credited with “reforming the morals of married women and of young noblemen, which were growing lax” (p. 131). Perhaps he had a personal motive: after his wife dies, we are told that Marcus Aurelius requested honors for his wife from the Senate “even though she had a reputation for lack of chastity.” Marcus Aurelius is probably the most familiar character who appears in this book; but here he isn’t entirely the buttoned-down Stoic he might appear to be in the Meditations and his letters to Fronto: here, he’s credited with praying for a thunderbolt that wins him a battle (shades of Constantine) and also successfully praying for rain for his thirsty soldiers. Marcus also had his no-good brother Lucius Vero; the story is presented, with the caveat that it couldn’t possibly be true, that Marcus Aurelius split a sow’s womb (the people in this book are constantly eating sow’s wombs, the reason for which I would love to know) with his brother using a knife poisoned on one side. It’s nice to imagine this scene, which appears in the lives of both; one can imagine the biographer’s motivation.

Occasionally there are nice asides. Caracalla appears here, for reasons that are unclear, under the name “Caracallus”; he dies on his way to do honor to the god Lunus, where he was done in by the imperial guard, as does seem to happen again and again. Then we get this:

Since we have made mention of the god Lunus, it should be known that it is held by the most learned and has been committed to record – and is still generally believed, especially by the people of Carrhae – that whoever thinks the moon ought to be called by the feminine name and sex will be controlled by women, and always subservient to them; but whoever thinks that the deity is masculine shall dominate his wife and never put up with any womanish wiles. Hence although the Greeks and Egyptians, in the same way that they say a woman is ‘man’, likewise call Luna a ‘god’, yet in mystic rites they use the name Lunus. (p. 256)

This passage has nothing at all to do with the life of Caracalla, save that he was ostensibly murdered trying to honor the god Lunus on his birthday (which Birley notes is wrong). But I like this narrative swerve, coming right after the climactic moment in his life: the sense that the narrator is distracted, but feels like he has something important to impart, however nonsensical it might be.

2 thoughts on ““lives of the later caesars””