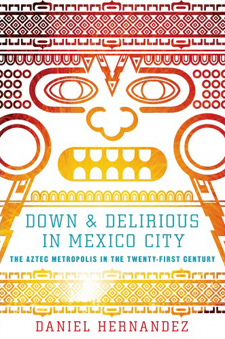 Daniel Hernandez
Down & Delirious in Mexico City: The Aztec Metropolis in the Twenty-First Century
(Scribner, 2011) 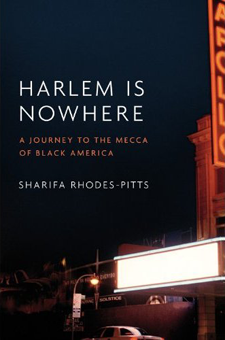 Sharifa Rhodes-Pitts
Harlem Is Nowhere: A Journey to the Mecca of Black America
(Little, Brown, 2011)

Two books this time, one that I’ve taken a very long time to read – I started Harlem Is Nowhere in February if not sooner – and one which just arrived and I read quickly. These books are superficially similar in that they consist of essays about a place – a neighborhood in the case of Harlem Is Nowhere, a nebulously defined city in Down & Delirious in Mexico City – but they’re different in tone and effect. The form is familiar enough, if possibly dangerous: Suketu Mehta’s Maximum City might be a useful example. Reading that book a few years ago, I found myself realizing that I’d find the book immensely fake if it presumed to tell the story of New York rather than of Bombay. The idea of making a city fit into a book is inherently problematic, as tempting as it might seem.

Maybe it’s easiest to talk about Down & Delirious first. Hernandez’s book is both helped and hurt by the existence for David Lida’s First Stop in the New World, from a few years ago; Lida’s book presents a well-written introduction to various facets of Mexico City for an American audience that doesn’t tend to think about Mexico City at all. Lida’s book is cited numerous times in the notes to Down & Delirious; one has the sense that Lida paved the way, and gave Hernandez the freedom to not write about many aspects of the city. Lida’s perspective is perhaps easier for the average reader to related to: he’s an Anglo who moved to Mexico City. Hernandez was born into an assimilated family in San Diego of Mexican descent; though he visits Mexico City for the first time as an adult, it’s easier for him to slide into the youth culture there. This is the real subject of Hernandez’s book: it’s a good one, and he arrives at the right time to chronicle it. The book founders a bit when he tries to draw larger conclusions about Mexico City, simply because it is so vast, and he’s consciously only dealing with a circumscribed part of it. Lida’s book – more considered, running the risk of being impossibly broad – is almost certainly a better introduction to the city for a general audience.

That said: Hernandez’s book is very pleasant to read. His prose conveys how vibrant the city is right now: for all its flaws, Mexico City seems much more alive, more full of possibility, more creative, than New York does right now. It’s a city full of strange wonders, and Hernandez has a great deal of fun tracking them down. His account of the Mexican emo riots of 2008, or example, carefully and empathetically takes apart what seems to be a ridiculous subject, finding in it a great deal of interest. He backs off, however, when the subject threatens to overflow the essay form: the homophobia he detects at the heart of the story isn’t interrogated at length.

Maybe that’s a problem with the form of this book. There was a recent piece by Paul Maliszewski that expertly anatomized the problem with magazine-writing as it currently exists in American literary culture. These are problems that bother me; the pieces of this book feel, to me, too much like magazine pieces, and while they’re good at that, I keep feeling like there could be something more made from them. Hernandez bounces from encounter to encounter; each piece more or less stands alone, though there are, of course, some common threads that carry through the book. This makes the book easy to digest; but it almost makes it too easy to digest. The last chapter, in which Hernandez attempts to build up to a resolution, falls flat, in part because his distributed form works against him.

Harlem Is Nowhere is by contrast a book more turned in on itself. It’s a record not so much of a neighborhood as it is of an encounter with a neighborhood’s extensively documented history. This isn’t to suggest that Hernandez’s book isn’t well-read: a tremendous amount has been written about Mexico City, and his copious notes document his reading. His reading, however, seems instrumental, something to be used as a means to an end; in other words, research. For Rhodes-Pitts, there’s the sense that Harlem exists to end in a book: it always has, but what that book is has changed over time. Where Hernandez talks almost exclusively with young people, Rhodes-Pitts seems to only talk with the old.

Harlem Is Nowhere makes it clear early on that it doesn’t pretend to be a definitive history: it’s more the record of an engagement with a neighborhood, wrestling with the problem of a sense of place in the manner of Geoff Dyer. It’s a considerably more pessimistic book that Down & Delirious: Rhodes-Pitts is writing about Harlem, buy she might be writing about the terminally bourgeois state of New York City in general. Rhodes-Pitts frames the book with problems of real estate: from present-day developer schemes to gentrify and destroy Harlem to the older black arguments (from Marcus Garvey on) tying cultural autonomy to land ownership.

Rhodes-Pitts is a cagey presence in her book: born in Texas, she moves to Harlem and looks intently at it, trying to map what she sees to what she’s read. She’s constantly being buttonholed by those who would be her elders, people who have ideas for her and her book, ideas that she questions more often than not. The stories she’s told often don’t hold up when subjected to scrutiny; but the same is often true of the books she reads.

There’s maybe a quiet echo of Don Quixote to her project: everybody knows that Harlem, like chivalry, is, if not gone, at least in a bad way by the time she gets to them, but maybe her book will get it right. She spends a great deal of time in libraries, attempting to square what’s outside with what’s inside: she moves from the book to the street to the book, sometimes more immediately, as when she is accosted in libraries by old people with their own theories. She’s good at listening; she’s good at digging up stories.

But this is, finally, an elegiac book, focused squarely on the past, with it’s corollary, how the past informs the present. One wishes the present could do a better job of speaking for itself; but this isn’t Rhodes-Pitts’s fault. She’s made a beautiful book out of it.