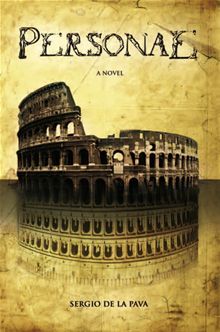 Certain things immediately remind the reader of Sergio De La Pava’s second published novel of his first book: again, it’s published by Xlibris; the covers are even more garish than A Naked Singularity; again, those covers are entirely devoid of blurbs. I don’t know that there’s necessarily any reason for those three things as there might have been with De La Pava’s first book, as that attracted much more attention and praise than one would expect from a self-published book. Now these details more clearly signify the author’s choice to stay outside the mainstream, a decision that seems entirely reasonable when the stream is as murky as it currently is. What De La Pava’s doing with Personae, however, is decidedly different from A Naked Singularity. Sticking to the externals, this is a notably smaller book: 216 pages, and flipping through one notices that the middle hundred are taken up by a play. De La Pava isn’t repeating himself here, for better or worse.

A Naked Singularity was the narrative of a heist grown gigantic, told in a single voice; while there are elements of the police procedural to this book, De La Pava’s up to something very different in Personae. The book is made up of ten chapters, told by a number of different voices in various registers. The frame story, such as it is, is told in the first, the seventh, and notes at the beginning of the third and ninth chapters. The majority of the book is made up of various sorts of documents found in or commenting on the frame story. It’s a considerably more skeletal arrangement than was the case with A Naked Singularity: the characters are harder to grasp, and the plot is more elliptical. The arrangement of the various pieces of the book is left to the reader.

There’s a lot going on in this book. We start, as noted, with the bare outlines of a detective story: a man is dead in a room; he is a very old man, 111, but Helen Tame, the sometime protagonist of this book and the narrator of the first chapter, thinks that he was murdered. Antonio Arce, as the old man turns out to be named, is also a writer: in his apartment is found a box containing a notebook, a short story written in the margins of TV Guide (“The Ocean”), a play (Personae), and what might be called a novella (Energeias: or Why Today the Sun May Not Rise in the East, Set in the West), which tells two stories in alternating sections of numbered paragraphs. These are included in the book, as are a pair of obituaries and three excerpts from an essay written by Helen Tame – who was, before she became a detective, a musician and a musicologist – on Bach, Glenn Gould, and “aconspiratorial silence.” Along the way there’s also a pretty good pastiche of David Markson’s aphoristic novels as well as a critique of the Rabassa translation of One Hundred Years of Solitude. And there’s an enormous play in the middle that reminds me of what I remember of Sartre’s No Exit, which isn’t very much.

Personae isn’t the easiest book to read, simply because De La Pava isn’t trying to make an easy book. The reader, for example, is trusted to know the relevance of Aristotle’s energeia to the paired narratives that close the book. The elephant in the room is the play in the middle of the book, which shares its title with the book (“Writer displayed zero reticence about using others’ titles as will be apparent to the discerning reader upon further development”). It’s hard for me to know what to do with this. I feel certain that there were references in the play that passed me by while seeming to point at something (some of the names of the characters, for example, seem to refer to Virginia Woolf, Wittgenstein, and the house of Atreus). Five characters wandering the stage for one hundred pages argue philosophically before their violent deaths; but it’s hard to know what the reader is meant to take away from this, in no small part because it seems to have little play on the rest of the book. It’s possible there are connections; however, it’s also hard to be convinced that a third reading of the play would be worthwhile. The play’s importance to the novel might be guessed from the fact that an excerpt is used in the place of a blurb on the back cover; does it matter than the section of a speech excerpted on the back cover changes gender? It could be a simple typographic mistake, a “she” becoming a “he”; in the play, a he becomes a she, but this might simply be coincidence. But it’s hard to imagine that most readers of this book will dig deeply.

De La Pava has a gift for voice; unfortunately, it doesn’t seem to carry over here. It’s frustrating that the play doesn’t work because much of the rest of Personae is entertaining, not least the game of playing spot-the-references. A Naked Singularity made me think of A Frolic of His Own, and there’s still the feeling of Gaddis here – Personae the play feels a bit like the insertion of Once at Antietam, Gaddis’s failed play, into Frolic, while the sections on Gould and Bach feel a bit like the tortured narrative of the life of Mozart that threads through a section of J R, a book also called to mind with a quick aside on player pianos. I also found myself thinking of Felipe Alfau’s Chromos, another story of elderly immigrants (from Spain, not Colombia) trying to make sense of New York by telling stories. And there’s not a little of David Foster Wallace in De La Pava’s voice; usually I count this against writers, but De La Pava seems to have some of the same mix of virtuosity and empathy that makes Wallace work.

Personae doesn’t really work, though it has some very nice pieces. It’s hard for me to disentangle the problems with this book from the problems with publishing; and that’s because the book is in large part about the problem of authorship and the place of the writer in the world. A passage from chapter 3, a short story called “The Ocean” (written by the dead Antonio Arce in the margins of a TV Guide with Dynasty on the cover) might serve as an example:

Sand, he knows, is essentially finely-degraded rock. Degraded by Life plus Time and if that formula can work this on that imagine it on the less sturdy. To build on sand is to deny all that in a deluded way. To build properly and for posterity use concrete. Concrete as in The Pantheon with its eighteen hundred years and counting. No less a personage than Brunelleschi saw that and largely followed suit to create art like Il Duomo that centuries later allows people like our professor to center their lives not on emulating him but on discussing exegetically what he produced. (p. 33)

The narration starts from the perspective of a professor floating in the ocean, though the “our” suggests that we’re moving outside of Professor Tenrod. What’s interesting here is how clearly the text is written from the perspective of a writer: it’s better to follow the example of Brunelleschi did than to talk about what he did, and the professor is found lacking. It could be a stretch, but this comes across as a credo for the book, or the reader’s imagined figure of De La Pava, in something of the spirit of Marx’s eleventh thesis on Feuerbach: “Philosophers have only interpreted the world, in various ways; the point is to change it.” This seems to be what De La Pava’s doing: in Chapter III, for example, he recapitulates Markson’s style; and a page after the quoted passage, there will be unreadable messages written on a beach (Wittgenstein’s Mistress); there’s also mention made of a “Writer” throughout.

After the play, Helen Tame explains that the dead Antonio Arce, subject of their case, can only be understood when he is treated as a writer:

A writer is someone who writes, Tame had patiently explained to Furillo when he objected that no agent, no prizes, no editor, no book deal meant to writer. Similarly, see if you can follow, an artist creates art. (p. 148)

It’s hard not to see the author himself in this definition. Arce’s writing is found in a cakebox; unpublished during his life, it has a transformative value to Helen Tame, the other protagonist of the book. Later in the same chapter, sitting in his apartment she considers his work:

Is the artist cursed, blessed, blessed to be cursed, or cursed to be blessed? Just plain cursed Antonio came to believe. How else to characterize an activity that in no apparent way benefited its creator but rather functioned more like a just-shy-of-mortal injury every time it was engaged in? There was simply no way to tell, and yes that included speaking to the actual writer, whether Energeias was unfinished or not and it was that uncertainty that had confounded Helen and initially tainted the rest of her enquiry. (pp. 153–5)

De La Pava’s wrestling with big concerns here, concerns that play out in the final section of the book, Energeias, which tells two parallel stories that seem to be retellings of different portions of the earlier life of Antonio Arce. Writing kills writers in this book; but it is necessary for its own sake.

This is maybe my problem with this book as a reader: De La Pava is writing for his own sake, outside of any system of publishing, and certainly he has no requirement to please me. But I wonder if an editor might be useful: not only to sprinkle the book with commas, but to argue with the writer for the sake of the reader. An editor as smart as De La Pava could make an excellent book from this one. But while writers will happily exists free of the world of publishing, I don’t know that editors will. De La Pava’s a very good writer, and one more people should be reading; but the total faith in the power of the author than self-publishing allows might be working to his detriment.