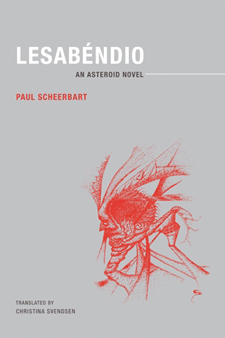 I’ve done a regrettably poor job of keeping up my reading this year, to say nothing of writing about what I’ve read; I feel bad about that, as there are a small handful of books that I would like to have written about in some depth. Too much work, not enough time, the eternal refrain. I’m breaking my silence with this, which I can’t pretend to review impartially: the translator has been a dear friend for years, and when she sent me a chapter wondering if I knew anyone who’d be interested in it I suggested Wakefield Press, who ended up publishing it. (I think I also passed her a copy of the first Scheerbart novel to appear in English, though I might be misremembering that.) Even so, it’s sat on my desk for a month before I could slot in time to make my way through it. But: this is a strange and interesting book, which should be clear from the publisher.

The strangeness of this book starts with genre: Lesabéndio is a science fiction novel from 1913 with strong architectural elements that might be more accurately described an architectural fantasia with a science fiction overlay. There’s probably more similarity to the Hypnerotomachia Poliphili than there is to Jules Verne or H. G. Wells; the science is almost entirely fantastical, though it does take place on an asteroid in our solar system, and mention is made of one historical scientist. The protagonists are of two species, neither of them human; the physical laws of our universe don’t entirely seem to apply to them. A portfolio of illustrations that Alfred Kubin did for the novel’s initial publication is included in the back of this volume, but Odilon Redon’s floating eyeballs and natural intelligences almost seem more appropriate to the cosmology of this book, where planets and planetoids quite literally have a Weltgeist.

What happens in this book is fairly straightforward, if bizarre. The setting is the asteroid Pallas, which is inhabited by a species of unisexual beings who appear to be primarily engaged in architectural endeavors. The asteroid is barrel shaped, though it has been turned into a torus by means of two inverted cones at the north and south poles, the points of which meet at the center. Lesabéndio gets it in his head to create an immense tower around the rim of the northern inverted cone; it will reach into the cloud that hovers over the north end of the asteroid which provides, by its motions, day and night to the planet. Lesabéndio’s motivations for constructing this tower vary across the novel; eventually, he seeks to pierce the cloud (made of living beings) to reach the unseen body that hovers past the cloud, which is seen as the head to the asteroid’s torso. Connecting the asteroid’s head-system to its body will achieve the planet’s destiny; Lesabéndio is taken into the head-system and becomes one with the planet.

Much of the book is concerned with the process of building the tower and the various impasses that the builders face, chiefly among them keeping Pallas’s population in agreement with the idea of building a tower. There are a handful of main characters, who have different aesthetic beliefs: one believes that the planet should be polished and crystalline, one prefers irregular and round forms, one is most interested in growing plants. These wills are eventually subsumed into that of Lesabéndio – quite literally, because when a Pallasian dies, he disintegrates and is sucked into the open pores of whichever person he chooses to be taken into. (Pallasians are all male in gender; they spring from walnut-like eggs which are dug from the metal core of Pallas and hammered on until opened. Before hatching, they live in a dream-world, communing with the universe. Who hammered open the first Pallasian nut is left unexplained.) They live in a sort of socialism, where all decisions are made by consensus; public opinion seems to shift very quickly though, and there are any number of setbacks before Lesabéndio’s building plan ineluctably succeeds. Most notably, there’s a conflict between those who think the enormous tower should be built and those who would like to create art; while something of a middle way emerges (parts of the tower are made beautiful), engineering wins out in the end.

The politics of this book are unsettling. Lesabéndio is the great man who will lead the race of Pallasians to their destiny; there is the unbending faith in progress, seemingly religious in nature, that could only exist at the start of the twentieth century. Doubt is never expressed that building a tower to heaven could lead to something bad or even to something desirable; there is only doubt about whether or not this is possible. When Lesabéndio begins constructing his tower, he does not even know that the head-system of Pallas exists; when he discovers it, this is mapped on to his pre-existing plan. It’s a strange book to read now: as trained readers, we keep expecting everything to go terribly, terribly wrong, but that steadfastly refuses to happen. There are technical problems, but those can be surmounted. It’s essentially a Futurist novel; as with Italian Futurism, fascism lurks, though in 1913 one could be happily oblivious.

It’s a strange novel as well in how hard it is to pin down; it’s reminiscent of many things, both before and after. The hollow planet looks backward to Poe’s Narrative of Arthur Gordon Pym and Symzonia, as well as forward to Ringworld or the wooden planet that Lebbeus Woods designed for Alien 3. Lesabéndio’s ecstatic oneness with the planet seems like the end of 2001, though, as I mentioned before, it feels aesthetically closer to the drawings of Redon. Though I’ve meant to, I haven’t actually read Thea von Harbou’s novel for Metropolis, the film she wrote with Fritz Lang. I wouldn’t be surprised if Scheerbart’s influence turned out to be apparent: Lesabéndio‘s emphasis on the head-system and torsos of stars (and the desirability of their successful merging) feels strongly akin to that film’s emphasis on mediation between head and hands. My knowledge of early science fiction is spotty; but this should be very interesting to those who know more.