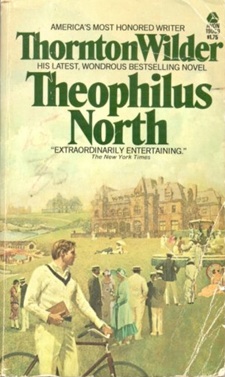 The recent Michael Dirda piece in Harper’s, occasioned by a couple of Library of America volumes, encouraged me to pick up a couple of Thornton Wilder novels I hadn’t read; I’d read Our Town and The Skin of Our Teeth and The Bridge of San Luis Rey when I was in high school, and I’d written him off as being a simple sentimentalist, which seems to be the general opinion of him. But he does pop up in odd places – as a good friend to Gertrude Stein, as well as a serious enthusiast of Finnegans Wake, which doesn’t easily mesh with the standard picture of his Rotarian fiction. Thus far, I’ve read The Ides of March and Theophilus North; they’re easily read, and seem to be aimed squarely at a mass audience, but they’re not without interest.

The Ides of March is an epistolary historical novel published in 1948; like I, Claudius before it and Gore Vidal’s Julian after it, it tells the life of a Roman emperor (the title is a bit misleading). It’s presented as a collage of documents, somewhat in the style of Dos Passos’s U.S.A.; however, the order in which it’s presented is not strictly linear. The book is divided into four parts, each of which starts before the previous part and extends further into the future, culminating, finally, in Caesar’s death, taken directly from Suetonius. In an introduction, Wilder admits that some historical rearrangement has taken place to accommodate his structure; historical fact is not a primary concern here. Caesar is presented as a benevolent dictator and a mastermind, arranging, finally, his own assassination; his primary interest is the well-being of Catullus, an empire’s poets being, in Caesar’s mind, its most splendid accoutrements. It’s a strange book.

Theophilus North, Wilder’s last novel, is also strange, not least because it came out in 1974. It boggles the mind a little to think of Wilder putting out a novel the year after Gravity’s Rainbow appeared; or to think that Wilder very well could have read Pynchon’s first three novels. Theophilus North couldn’t be more different: it’s a retrospective portrayal of a summer in the life of the narrator, Theophilus North, when he was a young man. The year is 1926; the setting is Newport, Rhode Island. Some of North’s particulars coincide with those of Wilder (both grew up in Wisconsin, California, and China; both spent a year post-college in Rome; both taught in a boarding school in New Jersey; both spent a summer in Newport), which lead to accusations of this being an autobiographical novel. Maybe it is; I am not an expert on Wilder’s life, and certainly couldn’t assign characters. But while there’s certainly something mawkish about the book’s portrayals of the halcyon days of youth (along the lines of Ray Bradbury’s Dandelion Wine) and the crazy cast of characters, there are also enough clues that something else is going on here.

The first odd note is sounded by North’s programmatic setting out of his early desires for a career: he could think of nine different ambitions for himself (to become a saint, an anthropologist, an archaeologist, a detective, an actor, a magician, a lover, a rascal, a free man). In the second chapter, he describes how the city of Newport can actually be divided into nine separate cities (following Schliemann’s description of Troy): some of these are historical (the seventeenth century-village, the eighteenth-century town) and some more sociological (the military presence nearby, the very rich, their servants). North describes his theory of the nine cities of Newport to many of those he meets; inevitably, he interacts with all nine cities, and ends up playing roles based on all nine of his ambitions. The mapping isn’t perfect (there’s not a one-to-one correspondence between cities, roles, and the stories that North describes), but it’s explicit enough to seem suspicious. The narrative style is also odd: although the story is ostensibly written by North in old age following his journals, there’s repeated doubling back. The novel takes place over three months; but the sequence of time isn’t always clear. The book isn’t quite interlocking short stories, though it’s close to that.

The setting of Newport allows Wilder to bring in the philosopher George Berkeley, who lived in Newport from 1729 to 1732. North is engaged reading Berkeley’s work to James Bosworth, who has the idea of buying Berkeley’s Whitehall and building an Academy of Philosophers in Newport, where the world’s leading philosophers will live. The idea comes to nothing, of course, but Berkeley’s ideas are injected into the text:

Newton’s friend Edmund Halley (of the comet) had mockingly spoken of the “inconceivability of the doctrines of Christianity” as held by Bishop Berkeley, and the Bishop replied that Newton’s infinitesimal “fluxions” were as “obscure, repugnant and precarious” as any point they could call attention to in divinity, adding, “What are these fluxions . . . these velocities of evanescent increments? They are neither finite quantities, nor quantities infinitely small, nor yet nothing. May we call them the ghosts of departed quantities? Crash! Bang! The structure of the universe, like the principles of the Christian faith – according to the Bishop – were perceived only by the intuition. (p. 93)

The universe, for Berkeley, exists only in the mind of the perceiver; it’s hard not to suspect that Wilder is covertly making an analogy to fiction. In the novel, North moves from person to person, fixing everyone’s problem; though his given name is Theophilus (“lover of God”), he asks people to call him Teddy, usually short for Theodore, meaning “God’s gift”; it is the way that he acts, repeatedly, like a divine intercessor that draws the reader’s suspicion. North makes it repeatedly clear that he doesn’t actually believe in God; it’s Wilder’s narrative ingenuity, more than anything else, that allows him to solve problems. While the book does appear forced and sentimental, Wilder consistently undercuts it. Though North’s final aspiration is to be a “free man,” as a character, he’s anything but that.