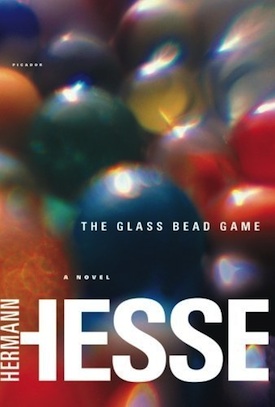 This book is a weird mess. I last read Hesse in high school, at the age when his novels of individuation seem appealing; I started this one then, though I didn’t get very far, perhaps because it wasn’t so immediate. The Glass Bead Game appears with Steppenwolf and Siddhartha on the lists of classics that students are encouraged to read – and has steadfastly remained in print – though it’s difficult to see why. I suspect my abortive high school reading experience is typical. I picked this up because of an offhand mention by John Crowley, who remembered reading it in the sixties; he mentioned that it was boring, but that the book might have seemed relevant than because the game described could be said to describe the conversations that people had then. I added the book to my to-read list; there was a copy at the local library, which I failed to open until I’d renewed it twice; if I hadn’t been in southern Cambodia with nothing to do at night, I probably would have sent it back unread. The conventional wisdom about this might be right: it is a boring book, much longer than it needs to be, but it’s strange, and the strangeness might be worth remarking on.

Structurally, the book is bizarre. There’s a short introduction, setting the scene and claiming the book is notes gathered anonymously telling the story of Joseph Knecht, the once eponymous Magister Ludi; the majority of the book forms a life of Knecht, which begins as a bildungsroman and turns into a hagiography. The introduction claims that this is written in the future about the past (a generation remote) from notes left in an archive; the dialogue and interiority quickly belies this. This might be the novel’s first disappointment: if it were what it claimed to be, the narrative would be more interesting. Instead, the introduction comes off as padding; while there’s clearly a narrative voice, the reader can’t do much with it. The life of Knecht is followed by an appendix of his writing; first, a handful of poems, bad, ostensibly written by the youthful Knecht; the one of most interest to the main text is dissected at depth in the text, and there’s no need to see it again. Then there are three short biographies written by Knecht; as described in the life of Knecht, these are meant to be student writings where Knecht imagines himself inhabiting a historical period. If this novel were being published today, an editor would suggest that this material (over a hundred pages) be interpolated into the main text; as it is, it seems extraneous, worth reading only if the reader can’t get enough Knecht. They do seem more like the more familiar short works of Hesse.

Hagiography is this book’s mode, and perhaps its main problem. Knecht is described in adoring terms; he’s presented as an extraordinary man, perhaps the best created by the system described in the book. After attaining the summits of the Glass Bead system, Knecht gives it up, leaving the academy for the real world; he promptly dies in an accident, and it’s unclear whether his ideas would actually work out. There’s blunt allegory here, of course: the safety of the ivory tower versus the risk and reward of the outside world, and it might be seen as a less pointed reprise of Julien Benda’s La Trahison des Clercs, which might explain the publication date. But the book’s sheer size blunts this: a great deal of work is put into setting up the world Knecht lives in, and the development of his character. A handful of secondary characters exist, though they clearly reflect Knecht’s light; they are types, predictable almost from their introduction. Knecht says words of wisdom to them and their problems are solved. Are we meant to understand Knecht as a saint? It’s very hard to tell. An introduction suggests that we’re meant to find ironic distance in the narration; I can’t find this, in part because the narrative strategy is so clumsy, the putative narrator disappearing whenever it’s convenient.

It might be worth pointing out at this point that this is almost entirely a book about men. Though secular, the educational system described is only open to men, most of whose mothers seem to have conveniently died. The vague idea of women exists – the men of Castalia must not marry, though they need not remain celibate – but it isn’t until p. 409 that a woman is actually given a line of dialogue (“The young gentleman?” asks an unnamed maid). One of the three stories at the end of the book promises a change, with the introductory line “It was many thousands of years ago, when women ruled”; we do finally get a named female character, but the story is entirely about men’s relations with their father figures. There’s nothing wrong with writing an enormous book with almost no female characters to speak of; but taking such a novel’s grand theories about culture seriously seems ludicrous.

This is a novel about the future (the back cover claims “the twenty-third century,” though I’m not sure where they’re getting that) that might conceivably be described as science fiction, though none of the usual signifiers are there: the single suggestion of technology is a device that might charitably be imagined to be something like PowerPoint, though it might simply be an overhead projector. The future is peaceful, though current countries and institutions survive, seemingly unchanged since the 1920s, an odd note as, again, the book was published in the midst of World War II. An odd note is struck at the beginning of the book, where the problems of the past (the “age of the feuilleton”) are described. It’s hard not to be reminded of the chronological structure of The Man without Qualities, which asymptotically approaches the beginning of WWI, of which its characters will remain blissfully ignorant forever. We are superior to those characters because we know (as did Musil, of course) what will happen to their world; but it’s difficult to know what kind of relationship to the characters in The Glass Bead Game we can have. They seem to exist in a parallel universe; though it isn’t one that can be comprehensibly aligned with our own. One argument that’s being made boils down to “always historicize”; but the reader has no position from which to tell whether or not historicizing is actually useful.