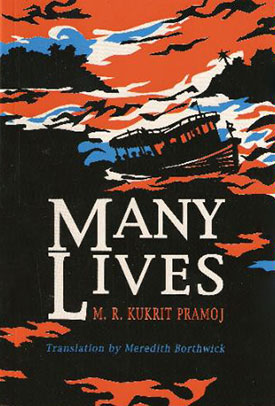 I moved to Thailand knowing no Thai writers, an embarrassing situation that’s not uncommon. Thinking of a representative Thai filmmaker or visual artist is easy; thinking of a Thai poet or prose writer, even a dead one, is much more difficult: the science fiction and horror writer S. P. Somtow might be the only current candidate. The nineteenth-century court poet Sunthorn Phu gets his own holiday here (June 26th), though he barely exists in English. I can’t really say why Thai literature is so invisible in the English-speaking world; right now I’m reading indiscriminately trying to catch up.

M. R. Kukrit Pramoj is an interesting figure, simply because he was so all over the place. He wrote a great deal of both fiction and non-fiction, and had a serious political career, including a brief stint as the prime minister. He’s undoubtedly best known in the English-speaking world for playing a prime minister alongside Marlon Brando in The Ugly American. After his death in 1995, his house, on Sathorn Road, has been turned into a museum, beautiful if poorly attended. Wikipedia gives an overview of his work, though there’s not as much detail as one would like. It does seem odd that his solitary translation should be Jonathan Livingston Seagull, though that might be Wikipedian caprice.

One notes in Wikipedia’s list of his writings the number of works that are adaptations – from John Wyndham, Giovanni Guareschi, Kurosawa; Khun Chang Khun Phaen is a retelling of an epic poem. Though not noted as such, Many Lives also falls into this category: one of the first things one notices reading the book is that it’s a fairly straightforward reworking of Thornton Wilder’s The Bridge of San Luis Rey. In that book a bridge in South America collapses and a monk wonders what the different people who died did to deserve their fate; in this one, a river boat bound for Bangkok sinks and an omniscient narrator wonders the same thing. The translator’s introduction notes that Kukrit’s book was written after seeing a bus accident in which a variety of people died; nothing is said about Wilder’s book, though it seems likely that he would have known of it or the 1944 film.

There are, it has to be said, fairly substantial differences between the books which might be usefully inspected. In Wilder’s book, the dead characters turn out to have been interlocked in life, while in Kukrit’s book there are no connections: each character gets fifteen pages about his or her life. Brief introduction and closing sections wrap up the book, but the characters are strictly isolated. Perhaps this betrays the origin of Many Lives: it was originally serialized, and even in book form it feels strongly episodic. While the reader can’t help but notice the contrasts between the character, there’s little tying them together.

Religion is inescapable. While Wilder’s book is nominally about Catholic theodicy, its argument is more clearly with the idea of predestination inherent in the American Puritan tradition. Though Wilder is remembered as a sentimentalist, his is essentially a world without God, something that Gertrude Stein gets at when she ends “A portrait of Thornton Wilder” with the lines:

He has no fears
At most he has no tears.
For them very likely he is made of them.

Wilder explicated these lines in a letter to Richard Goldstone in 1968:

“For them” means for a large part of the reading public – and for you – The Bridge of San Luis Rey and Our Town are tender, tear-drenched, and consoling. But they aren’t, they’re hard and even grimly challenging, for “He has no fears”(The Letters of Gertrude Stein & Thornton Wilder, p. 307n6.)

It’s worth emphasizing this point, because Kukrit is writing from an entirely different perspective. This becomes clear at the end of the story of the Venerable Sem, a monk whose life has been exemplary:

When his body was retrieved the next morning, everyone marvelled to see that he was still in the posture of Indra’s thunderbolt, or the diamond position. The purity and fullness of his existence had led the god of death to spare him the agony of a protracted illness. The peaceful life paused, then halted, in the water with a coolness which was like water itself. Sem had been swept out on the current to the sea, never to return to the cycle of birth and death. (p. 48)

There’s no obvious authorial distance from the voice narrating this passage; similar conclusions are given to most of the lives narrated here. The reader is asked to understand their deaths as being not senseless (as is the case with Wilder) but as part of the cycle of karma. One also notes that there’s no sense of society as a whole: though Loi, the first character introduced, is a sociopath, his villainy has no effect on anyone else; nor does the presence of the monk save them.

I find myself interested in how Kukrit’s literary career seems to included large numbers of cover versions; I can’t tell exactly what that signifies. A straight translation of The Bridge of San Luis Rey probably wouldn’t have gone very far with a Thai audience; the religious argument that Wilder was making would have seemed nonsensical. Remaking a text, as this book does, might be more sensible. Most of Kukrit’s other reversionings aren’t available in English, so it’s difficult for me to compare strategies.