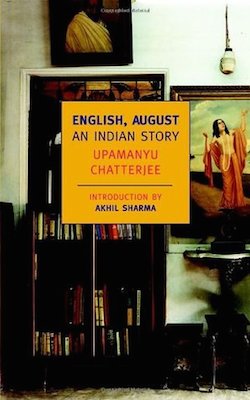 I missed this book entirely when it was reissued; at some point, NYRB started releasing so many books that it was hard to keep track of them all, and I only happened to come across it in the Neilson Hays, Bangkok’s odd but necessary subscription library, while looking for reading in preparation for a vacation in Kolkata and Darjeeling. How this book turned up there is something of a mystery – their collection mostly runs to colonialist memoirs, British thrillers, and an ungodly number of books attempting to explain Thai ways and their meaning – but it was a happy discovery. My knowledge of Indian fiction – even written in English – is embarrassingly spotty, to say the least. It goes without saying that Indian fiction doesn’t tend to get a lot of coverage in the U.S.; it’s been interesting spending time in Kolkata – maybe the best city for books I’ve ever been in, certainly the best one anywhere near here – and seeing just how much interesting work is available that I know nothing about.

But this book. The plot is fairly simple: the protagonist, Agastya Sen, has just graduated from university and has been accepted into the Indian Administrative Service; as part of their training, he’s sent to a nonentity of a town called Madna where he’s to learn the ropes. Agastya – sometimes Ogu, August, or simply “English” because his Bengali name is too complicated for others to say – is a slacker who understands that the vast majority of what’s done by the bureaucracy is effectively meaningless; but he also understands that it’s impossible to change anything from inside. He spends his days shirking work, smoking pot, masturbating, listening to Keith Jarrett and Rabindranath Tagore, reading Marcus Aurelius and the Ramayana, writing in a journal, and cadging dinners off of friends and coworkers. He considers quitting, but has no real ambitions. He’s reluctantly following in the footprints of his father, who is the Governor of West Bengal; there’s the strong sense that he’s a disappointment. He completes his town in Madna and is then sent to an even smaller, non-existent town. And finally something happens: out of misguided intent, he comes into contact with the ostensible aim of the job – bettering the lives of Indians – decides to actually do something worthwhile (bring water to a town with a dry well) and inadvertently stumbles across something very different, complicating his world but bringing him to a deeper understanding of it.

There’s more going on here – Indian class and identity are clearly important, though I can’t say anything informed about them – but what’s most striking to me about this book is as a visceral depiction of work: the drudgery entailed in the majority of jobs. This is drawn from life: the first paragraph of Chatterjee’s Wikipedia page currently defines him as “an Indian civil servant who currently serves as Joint Secretary to Government of India in the Ministry of Defence” and reveals him to have gone through the IAS himself, just as Agastya Sen does. Only in the second paragraph is he a writer.

The experience of work isn’t something that’s written about particularly often. There’s a prosaic reason for this: work generally precludes writing. The sorts of work taken up by writers are certainly covered (teaching, scraping by as a freelancer, trying to write), but there’s a general absence of non-writerly jobs, which make well-written accounts all the more interesting. In American fiction, you can trace this back to “Bartleby the Scrivener,” drawn from Melville’s work at a customs-house; a large amount of Melville’s writing is based on work. Jack London’s Martin Eden is a powerful account of manual labor and what it takes out of a person; it’s not often read in the U.S., perhaps because it’s not what serious fiction is meant to be about. (A corollary: by that reading, serious fiction is done by the idle rich – Henry James, Edith Wharton – which does, more often than not, seem to be the case.) More recently, I’ve been taken with Stanley Crawford’s narratives of his life as a garlic farmer (the experience of which doesn’t seem to have made its way into his fiction) and Sergio De La Pava’s work as a public defender, which very strongly appears in A Naked Singularity. I find something useful in these accounts: work is a part of most of our lives, and it’s something that fiction can be useful in trying to understand, though more often than not it seems like something that fiction shies away from.

There’s comedy in English, August: Agastya hates his job and will go to elaborate and comical lengths to avoid doing work, and work, when he does it, seems to consist of signing endless stacks of paper while attempting not to read them. His shirking, though, is a more serious subject: he’s passing time in Madna, avoiding real life. “Real life,” however, doesn’t have a particular meaning for him: while he misses his old friends and is unhappy to be far away from them, he’s lacking in ambition. His position in the IAS does provide a clear path to security and respectability; his family connections make it clear that there’s a safety net. But deciding to want to do what he’s doing – or even to consider that as a choice – is difficult for Sen. The climax of the novel is interesting: it points to a conventional novelistic solution (he sees that the bureaucracy, for its flaws, is actually helping people) but then shies away from it. The world it depicts is more complicated than that of the novelistic arc. Sen does seem to understand that his work can be useful; however, the world is unpredictable. Sen ends this book seemingly resigned to his life in the IAS, though what he thinks is hidden to the reader.

Chatterjee’s written a sequel to this book, which appears to continue Sen’s adventures or lack thereof: I’m curious where he goes.