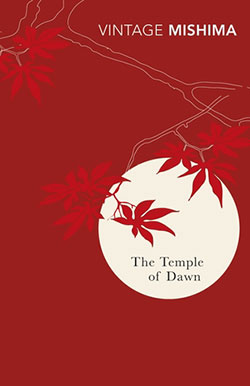 Bangkok in literature not written by Thais tends to exist as a playground for the male gaze, often an Orientalist male gaze; if you toss out the backpackers and sexpats, you’re left with surprisingly little. Yukio Mishima’s The Temple of Dawn might be the most serious non-Thai novel about Bangkok. I haven’t read the other parts of the Sea of Fertility tetralogy, so my reading will necessarily be myopic; eventually I’ll get around to the rest of Mishima, but I’m not in much of a hurry.

Thailand doesn’t fit particularly well into the framework of postcolonialism, having never been colonized, a distinction that it shares with Japan among Asian countries. It’s interesting, then, that this might be said to effectively be a colonial novel, being set, in part, during World War II, when Thailand, under Fascist rule, ceded control of the country to the Japanese and joined the war on the Axis side. (There was, it should be said, a fairly substantial resistance, the Free Thai Movement; the Thai ambassador to the U.S. never delivered the declaration of war, which proved helpful afterwards.) Thailand here is presented as being a client state: the protagonist, a Japanese lawyer, is there on business, sorting out imperial problems before the war that will break out.

The description of Thailand is a mess; I can’t tell if it’s the editing, the translation, or the book itself. There’s a painfully obvious mistake on the first page: “Another ancient name is Krung Thep, or ‘City of Angles.'” Thep (เทพ) is the Thai word for angel, not angle; in the same paragraph, the city’s river is referred to as “the mother waters of the Menam” (เเม่น้ำ), the Thai word for river. It’s not clear whether this mistake was on the part of the author or the translator: เเม่น้ำ is literally “mother of water,” so this may be an attempt at a pun that got lost. More likely, it’s a mistake: English writers mistakenly imagined that “Menam” was the proper name for the Chao Praya for years, though almost all had stopped by 1973, when this translation dates from. Either way, the tautological “Menam River” is used for the rest of the book. On the next page, there’s a reference to the district of “Bangkap” which is almost certainly meant to be “Bangkapi”. On page 11, the reader learns that one can see Wat Arun (the Temple of Dawn of the title) from the Oriental Hotel: Wat Arun is roughly two miles north of the Oriental, and there are considerable bends in the Chao Praya, making this deeply unlikely even when Thonburi was significantly less built up than it is now.

(I’m leaving aside obvious transliteration oddnesses: there’s no single method of transliterating Thai into the Roman alphabet, a problem which bedevils all writing about Thai in English.)

It is interesting that this book, which takes rather extreme liberties with the sacrosanct Thai royal family in the line of demonstrating its theories about reincarnation, doesn’t seem to have been banned in Thailand; certainly if it were published in Thai in today’s climate there’s a very good chance that it would be. The protagonist has gone to school in Japan with two minor (and non-existent) Thai princes; this is hardly controversial. (This is presumably covered in earlier volumes of the Sea of Fertility sequence which I, again, have not read.) But while the protagonist is in Japan immediately prior to World War II, he meets a child princess, who appears to be mentally disturbed; for reasons that are not clear to the reader of only this book, he becomes convinced that she is he reincarnation of his dead friend, which she semi-miraculously confirms.

A great deal of the middle of the book is taken up with the protagonist’s researches into reincarnation across various cultures. (This does make Thailand an apposite setting; Thai beliefs, however, are not particularly privileged.) While this material is mildly interesting in its own right, it falls flat as fiction, particularly because the previous events have made it clear that reincarnation is undeniably true in the universe presented in the novel; this feels like ex post facto justification.