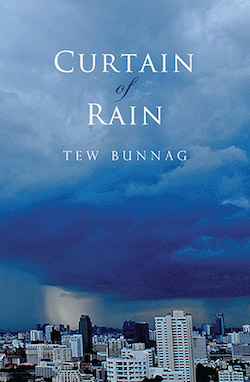 There’s a notable paucity of contemporary Thai fiction in English. In part, this is because very little is translated from Thai to English; but it’s also due to there not being that much Thai fiction. Thailand isn’t a particularly bookish culture, despite considerable recent prodding which has led to an upswing in book fairs; at Book Expo 2014, I picked up a copy of this book, which might not be said to be, strictly speaking, a Thai book. Though its author is Thai, Curtain of Rain was written in English. Tew Bunnag comes from an old Thai family important enough to have its own Wikipedia page; he grew up in England and now divides his time between Thailand and Spain. This compromise is what makes the book available to its audience: were he writing in Thai, it’s unlikely that an English version would have appeared. But there’s a broader question with this book: who is it for?

A step back. One of the things that’s most interesting to me about living in Bangkok is how unbookish the city is, how it almost seems to resist narrative. While there are countless memoirs by Westerners in Bangkok – stretching back to the nineteenth century and Anna Leonowens’s fabrications – and a more recent vogue for Bangkok noirs, one has the feeling, surveying it all, that there’s a central narrative that goes unsaid here. Part of that is legal: lèse majesté laws make it impossible for almost anyone to say anything (let alone anything critical) about one of the central organizing structures of Thai society. Past that, one realizes, is another layer of opacity: Thai society is relatively small and centralized, organized around families, and there’s a strong urge not to step on any toes. One realizes quickly reading the news here that an enormous amount is left out of any account; over the official record, there’s an oral layer of discourse based, from necessity, on rumor.

Out of habit, it’s to fiction that I turn trying to understand what’s going on here – there are, it seems, all of the ingredients that should lead to great fiction. And it’s not here, or I can’t find it, and that’s confusing to me. Part of this is the question I started with, that of audience: Thai readership was historically small, and while it’s now potentially much greater, the appetite for the book has been superseded by appetites for newer forms. There’s a much wider readership outside of Thailand – and, I think, a world that would be receptive to different narratives coming from this country – and it’s presumably this audience for world fiction that Tew Bunnag’s book is meant to be read by. But this is, despite its presumably non-Thai audience, a very Thai book, wrapped up in the problems with Thai society.

Curtain of Rain has a familiar structure: two narratives which intertwine. One is that of a Thai writer, with excerpts from his writing, which creates a third narrative. The other is a British woman, his editor, who ends up in Bangkok; they have, predictably enough, a connection from the past. The book falls apart for me with the narrative of Clare, the British woman, who, while depicted in what is clearly meant to be realist manner, fails all criteria for believability. She is, almost upon arrival, diagnosed with Alzheimer’s; the doctor memorably asks:

‘Is there any history of Alzheimer in the family?’

Disease is dishearteningly being used as narrative shortcut: her mind is going, so she needs, in the next two hundred pages, to neatly wrap up her life. Six months later she’s only lucid enough to wrap up the book. In between these two things, her editor, at her extremely vague request, flies her business class to Bangkok and puts her up at the Mandarin Oriental. It is possible that British publishing has grandly different economics than American publishing does, but this strains credibility. Further, she is returning to the city because of an incident in the 1960s, when she came, at his request, to stay with a photographer boyfriend, a romance that fell apart when he inadvertently reveals his preference for young boys, an incident that appears to bring her life to a halt entirely. None of this – I haven’t even described the nonsensical office politics at her publishing house – is at all believable.

It’s a shame because it casts doubt on the Thai half of the book, which I’m not nearly as qualified to judge. Many of the characters here appear overly familiar &ndash the poor girl from Isan, for instance, led astray in the big city and who gets AIDS awfully quickly. There is one section that shows some promise: the short narrative written by the Thai writer on his work on a radio show with a demagogue, who he finds abhorrent. The demagogue dies unexpectedly – despite his conservatism, he has a gay lover who murders him – the writer is tasked with writing an obituary. He writes two: one of the celebrated public man, the other laying bare his hidden private life. It’s clear which will be printed. This disparity between what goes on behind closed doors and what’s publicly reported is an apt one for contemporary Thailand, where press restrictions, both legal and otherwise, make much of the media appear nonsensical.

Curtain of Rain fails structurally: the British half undercuts the Thai half, and the conclusion – everything is connected! – seems laughable. Copyediting doesn’t do the book any favors: while Thai transliteration is famously lackadaisical, there’s no reason for the same book to have both “Taksin Shinawatra” and “Thaksin Shinawatra”, or “AIDS” and “Aids”. It is possible that serious editing could have saved this book: there might be a good novella in here waiting to be found, and a handful of decent short stories could be taken from it. As it stands, it doesn’t work. It’s frustrating: the theme of crossover between Thai society and the foreigners who permeate it could go somewhere. I would like to see that book. I haven’t.