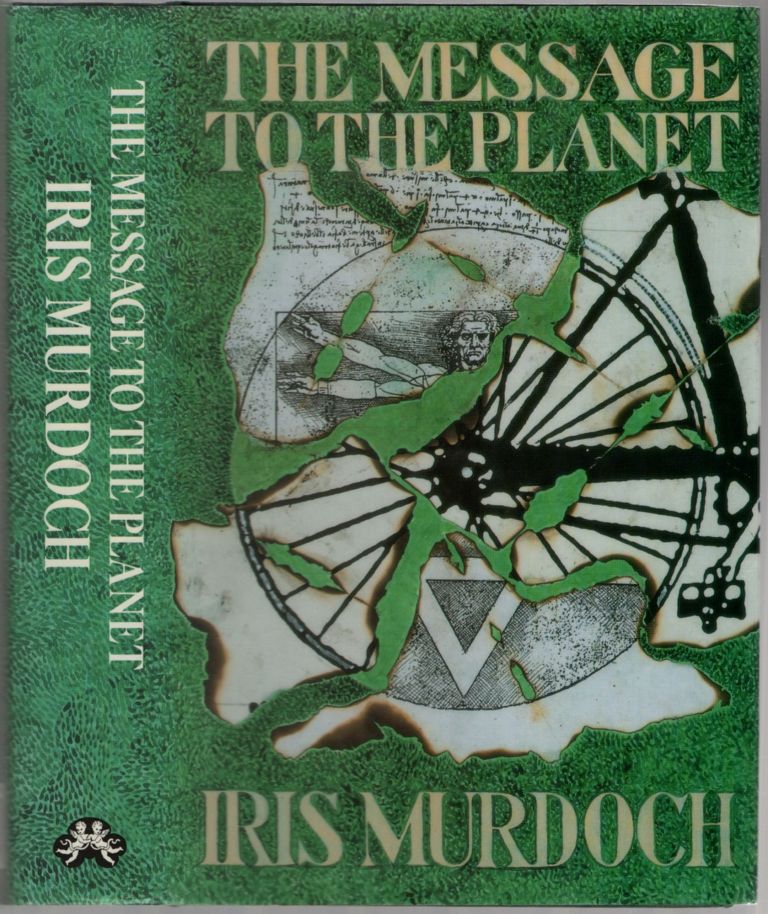 Iris Murdoch
The Message to the Planet
(Chatto & Windus, 1989)

The Message to the Planet, Iris Murdoch’s penultimate novel, feels like any of a number of any other novels by her. There’s an enchanter figure; there’s a cast of interrelated people with a clear romantic dilemma; there are characters who are outwardly together but inwardly lost. The economics are left vague; everyone is well-educated and seem to be living in nice spaces. We start with singing of madrigals; later there will be outdoor swimming. There’s a lot of stress on how people can make moral choices and how they are essentially good. Having read the rest of Murdoch’s novel (except for her historical novel and Jackson’s Dilemma), it felt like I was treading overly familiar ground: if you fed an AI Murdoch’s previous novels and told it to come up with another, only longer, there’s a very decent change you’d end up with something like this.

What’s initially confusing about this book is when it was published: 1989, though there is very little to indicate that at all. None of the characters behave as if the social upheaval of the 1960s ever happened; we are in the same quasi-academic pastoral in which most of Murdoch’s novels operate, though there are a few elements which stick out. Some new age travelers show up in the middle of the book; none of them have anything to do with pop culture – they can also sing madrigals – though it might be presumed that the setting is sometime after the late 1960s. There’s a theme of anti-psychiatry, though this doesn’t seem to track that well with how the movement played out in the UK; that might suggest that this takes place in the 1970s. There are a number of Jewish characters, almost entirely secular; it is stressed repeatedly that none of them know anyone directly involved in the Holocaust. The enchanter figure seems to be in his sixties; by almost any reckoning he would have been adult when World War II and its aftermath happened, though this doesn’t directly figure. Instead, he reads a number of books about the Holocaust having not found out about it before. It’s vaguely possible that this might have been the case for extremely secular Jews in the UK, though it seems hard to imagine this being the case in the 1980s.

Where this book feels distinctive is in its sheer length: it might not be the longest of her novels, but it feels like it. There are two plots: an enchanter and his apprentice and a love triangle that will be reconfigured. The resolution of the love triangle is predictable for anyone who’s previously read an Iris Murdoch novel; it’s not her most interesting treatment of the subject and it seems like it could have been resolved comfortably in a novella, though it mostly serves as bookends for this novel. The adventures of the enchanter and his apprentice are drawn out to astonishing length. It becomes apparent very early that the apprentice figure, Alfred Ludens, is delusional and in crisis, and that the enchanter, Marcus Vallar, is not going to serve in the way that Ludens wants. Ludens is an idiot; the bulk of the novel is his banging his head against the same wall again and again in the hopes that things will be different. (There’s an echo of this in the romance subplot: one of the characters is given the primary characterization of being longsuffering and gracious, which she continues to do well past the point where any reasonable person would: this also becomes tiresome.)

A break comes at the end, suddenly, and the apprentice realizes that what he had imagined was entirely wrong; that he had been mistaken about almost everything. The enchanter dies; Ludens is appointed literary executor with the sole duty of destroying all of Vallar’s writings. The enchanter does not have many writings; the few that can be found are dutifully burnt, with invocation of Max Brod. Ludens realizes that he has learned nothing; the effect here is not of Proust but rather of Henry James. (There’s a ridiculous American character who comes off as pastiche; she’s from Boston, has an immense amount of money, and the improbable name “Maisie”.) The suddenness of the ending is interesting: the actual change in Ludens, as he adjusts to his realizations about the world, will happen after this novel ends.

This is a long exploration of credulity, the will to believe in the face of copious evidence to the contrary. At certain points in the novel, events happen that could be described as miraculous; but whether they are miraculous is left purposefully unexplored, instead serving as canvases for different canvases to view in different ways. Change happens rarely among the characters; evidence has little to do with it, though something viewed as a miracle might.

What’s distinctive about this novel might be its durational aspect: the reader feels trapped with Ludens in his failure to understand the world. It’s an experience of suffering in the face of a lack of meaning. Whether this is intentional is hard to tell: read after a lot of other Murdoch novels, it feels like an unsuccessful copy of more dynamic books that have used the same themes. To me, it’s a bad late book by an interesting writer who’s written much better ones; in this, it reminds of of Anthony Burgess’s Earthly Powers, also long but overstuffed in a way that is the opposite of this book, an enormous space with very little for the characters to do. I imagine, however, that someone could make a good argument for this book; I’d like to see that.

One thought on “iris murdoch, “the message to the planet””