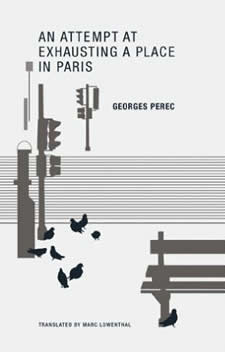 This is the third book from Wakefield Press: it presents a full translation of Georges Perec’s An Attempt at Exhausting a Place in Paris. This is a minor work in the Perec landscape, which receives only a glancing mention in David Bellos’s enormous biography. It’s encouraging that there have been a steady flow of new Perec books, no matter how small: 2008 saw Atlas publish Cantatrix Sopranica L.: Scientific Papers, and last year saw David Godine publish Thoughts of Sorts, both previously excerpted in Penguin Species of Spaces (as well as the revised translation of Life a Users Manual, of course). It’s nice seeing Perec’s books as small self-contained objects; the Penguin volume, which presents a lot of material, is too easy to skip through. At 55 pages, this book is shorter than the other two, short enough for me to read on the brief flight from Norfolk, Virginia to Baltimore, though it’s a book that demands re-reading.

As the length suggests, this is a self-consciously minor work: it might be considered an investigation in boredom. Perec chose a place in Paris – Place Saint-Sulpice (visible, not particularly well, on Google Earth and visited it nine times from the 18th to the 20th of October, 1974, four times the first day, less on the following ones, attempting to write down everything he saw. The results are this book. There is pointedly nothing particularly remarkable about the location, and in his introduction Perec makes clear his intention not to write about Saint-Sulpice’s notable features: rather, Perec was attempting to find something interesting in the ordinary, a project that he’d soon expand (restricting the span of time, but increasing the space to an entire building) into Life a User’s Manual.

This is a personal exercise, and because it follows his attempts over time, it feels very much like a series of notes: the reader observes the observer, and how he begins to notice things. He starts his first session by writing down all the text that he can see, then moving on to different sorts of categories (“fleeting slogans,” “ground,” “trajectories,” “colors”). Things start quickly: he’s trying to get everything down. Then there’s a slowing: he tries to notice what changes over time. For a while he’s preoccupied with the many buses that pass through the square (the second section is largely a record of the buses that pass as he watches); then he gets bored of noting the buses; and finally in in the fourth section he realizes that he can describe a bus not simply by the number of its route or where it’s going but by how full it is. It’s a tiny moment of revelation: of looking at something ordinary long enough to see something new in it.

A few personal details pop up: he tells what he’s eating or drinking, and a couple of times he sees people pass that he recognizes. One wonders how personal some of the details might be: why, for example, does he mention an”apple-green 2CV” over and over? Is it the same car? Was there a reason that his attention might be drawn to this make and color of car over others? Or were there simply a lot of them in Place Saint-Sulpice in 1974? The writer is sometimes bored with his project; one wonders why he stopped on the third day. By writing on a Friday, a Saturday, and a Sunday, he’s presumably covered most of the weekly variation likely to occur; but looking longer might have brought more out. Perhaps it’s left as an exercise for the reader.

Perec’s project is a generative one, of course. Reading it, I found myself thinking most often of Daniel Spoerri’s work, first his “snare paintings,” where he’d glue down the detritus of a meal to the table and exhibit it on the wall; later, he created a literary equivalent of this in his Anecdoted Topography of Chance, mentioned in Marc Lowenthal’s very nice translator’s note. In both, Spoerri was attempting to create meaning from trash; the Topography uses trash on a table to generate narrative, albeit a narrative more personal than Perec’s. Spoerri and his friends could generate a narrative from their personal trash because there was something personal that could be seized upon there: how the trash got on the table, where the trash was from. Lowenthal also mentions Joe Brainard’s I Remember, another generative trick that Perec brought into French; this also relies on the personal. What Perec is doing in An Attempt might be something trickier: he’s trying to make an utterly anonymous public space personal. It’s a difficult job: ultimately, this is more of a record of Perec’s time there over three days rather than a depiction of a place. Perec isn’t depicting the square, he’s exhausting it (as well as himself); by the end, he clearly wants to go home. This is a lonely book.

I’m still kicking myself for missing MoMA’s program of Perec’s film work a few years back; I suspect that familiarity with his work in film, generally inaccessible in this country, might illuminate this book a bit more. One can’t have everything, I guess; it’s nice that we have as much of Perec’s writing in English (and in print) as we do now. Again, it makes me happy that Wakefield is publishing books like this: most publishers wouldn’t bother with a slip of a book like this, no matter how well it works. This book is as attractive as the two previous books from Wakefield, the first of their “Imagining Science” series; I’m curious to see where they’ll go with that. The paper is thick: it’s a pleasure to read. As mentioned, the translator’s note at the end of the book by Marc Lowenthal helpfully explains the text without lapsing into the overly academic; this kind of attention to detail is important, and it makes Wakefield’s work worth following. I’m particularly interested to see how their volume of Fourier turns out: but that’s next year. 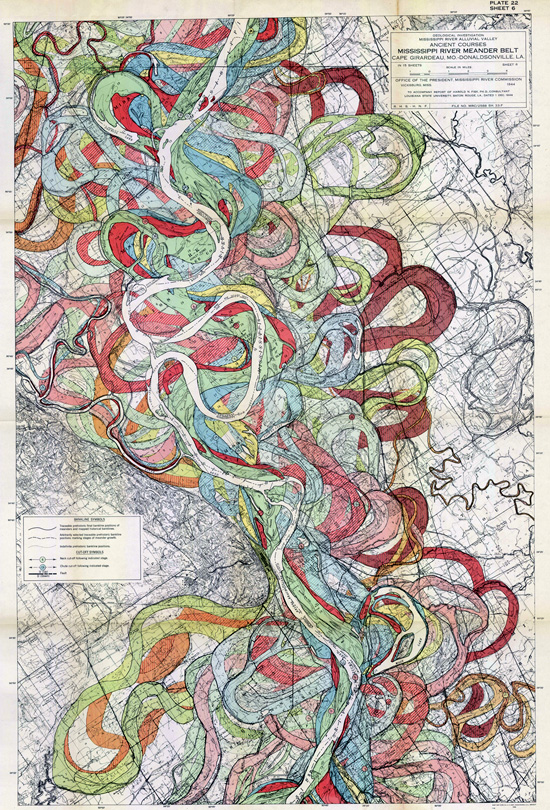 (from a 1944 Army Corps of Engineers report on the history of the Mississippi River, here from Cape Girardeau, Missouri to Donaldsonville, Louisiana)