“Thus the guests began, as time passed, to regard the affair in an historical light. They told their friends about it, reenacted parts of it for their children and grandchildren. They would reproduce the way the old man had piped ‘I’ve no money!’ in a comical voice, and quote his odd remarks about marrying. The death of Edward Lear became so popular, as the time passed, that revivals were staged in every part of the country, with considerable success. The death of Edward Lear can still be seen, in the smaller cities, in versions enriched by learned interpretation, textual emendation, and changing fashion. One modification is curious; no one knows how it came about. The supporting company plays in the traditional way, but Lear himself appears shouting, shaking, vibrant with rage.”

(Donald Barthelme, “The Death of Edward Lear,” from Overnight to Many Distant Cities.) 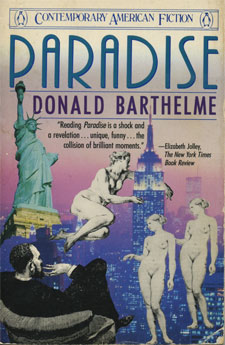 Paradise seems to be Barthelme’s least appreciated novel: Snow White has stayed in print most consistently, The Dead Father seems the most obviously ambitious, and The King is funny historical fiction. Paradise might be my favorite of his novels, the one I’m most tempted to pull off the shelf, though I’ve read Snow White more times, and I think The Dead Father deserves respect. The King, for whatever reason, never really clicked with me. But Paradise is the neglected one. Michiko Kakutani hated it, generally a good sign; there don’t seem to be a lot of other reviews about, and it evidently doesn’t merit its own Wikipedia page.

Like much of Barthelme’s work, Paradise is a novel with a wacky premise: three underwear models move in with a middle-aged architect who is adrift in his own life. This is the reverse of Snow White, written twenty years before, where one woman is living with seven men. But this is not a young author’s wacky premise; rather, this is a wacky premise written by a middle-aged man with a middle-aged man as the protagonist. I’m reminded of the premise that forms the basis for Proust’s The Captive: suppose a young man, well known in society, decides to install his lover, also well known in society, in an apartment in his own house. This causes the considerable displeasure of everyone’s families; but looked at closely, one realizes that this segment is a break from the realism that drives the rest of Proust, and that no one is behaving in a way that anyone would would expect. Proust’s aims here are not autobiographical, though Albertine might be a stand-in for his male chauffeur. Rather, he takes his character, sticks him into a situation, and sees what will happen. That’s what, I think, Barthelme is doing here: taking a character and sticking him into an unlikely character to see how he will react. Barthelme’s women are as nebulous as Proust’s Albertine, understood only through the main character’s consciousness.

Paradise is made up of sixty unnumbered sections, mostly lasting three or four pages. A chronology can be worked out. First, the past: Simon, who has studied architecture at Penn with Louis Kahn, worked in Philadelphia and was married to Carol (“everybody’s with is named Carol” – p. 131); they had a child, Sarah, but the marriage fell apart and Simon moved to New York. New York is the continuous present: Anne, Dore, and Veronica move in with him for eight months; finally, they leave, ostensibly to find jobs. Finally, after their departure Simon stays on in New York, where he seems to be seeing an analyst (or someone who is questioning him on his experiences). These pasts, presents, and futures are interleaved; but it’s unclear, for example, whether the ten sections where Simon is questions appear in the book in chronological order. While the sections set in the present appear to be in chronological order, many are vague with reference to time; and the past is called in as needed. In section 38, for example, Simon meets a poet; section 40, detailing what happens with the poet, takes place after 38, but section 39 could take place any time in the continuous present. The sections with Simon and the poet are hard to match to the rest of the narrative, as only Simon and the poet appear in them; in the intervening sections, Simon may not appear, or Simon may be appearing in the future, talking about his past. The arc of Simon’s affair with the poet continues in section 43; finally, it is resolved into the main narrative in sections 44 and 45 after it has ended off-stage.

Ten of the sections – scattered fairly evenly across the book’s sixty sections – are interviews (by characters given the name “Q:” and “A:”) where it becomes clear that the person answering the questions is Simon, and Q says, at one point “I’m a doctor.” The premise of these interactions seems to be the vivid dreams that Simon is having, dreams that seem to start after the women leave. A different version of these questions and answers appeared as “Basil from Her Garden”. (I assume that the title refers to Keats’s “Isabella; or, the Pot of Basil” refracted through T. S. Eliot, but I might be wrong.) The modifications are interesting: primarily, the change made is one of tense, which changes the whole character of the exchange. In “Basil from Her Garden,” Q asks “What do you do, after work, in the evenings or on weekends?” while in Paradise Q asks “What did you do, after work, in the evenings or on weekends, in Philadelphia?” The answer, in both, is adultery. In Paradise, this is given as “Well, adultery. I would say that’s how I spent most of my free time. In adultery.” “Basil from Her Garden” differs by a single letter: spend instead of spent. In Paradise, A is referring to the vague past; because of the “in Philadelphia,” Simon seems to be referring to what happened in his marriage (dissolved or in the process of dissolution) before he moved to New York; he’s not talking about the three women at all. In “Basil,” we learn about A’s married lover, Althea, and his wife, Grete; he seems to be talking with Q to resolve the problem of his marriage. What happens in Paradise is more complex: Simon appears to be explaining his life – from the breakdown of his marriage on to the departure of the girls, which seems to have brought on a series of bad dreams – to Q, who seems to be more interested in hearing about his time with the three girls.

The Q & A sections are the clearest structuring device in the book, but others run through the book. Four sections consist of entirely unattributed dialogue between the women about Simon; sections which consist mostly of Simon talking to one of the women also recur, as do sections in which Simon is cooking. Occasionally a section is in detached third-person, relating what happened to Simon from a later vantage point; or a section relates what happened to Simon in Philadelphia before the main events of the book took place. Repetition with differences occasionally happens. Section 27 begins:

What if they all lived happily ever after together? An unlikely prospect. What was there in his brain that forbade such felicity? (p. 100)

At the start of section 55:

And what if we grow old together, just the four of us? The loving quartet? What if we raddle together? (p. 195)

There’s not quite the unidirectional moving inward across the book that this pair suggests, as they move from the third person to the first. Rather, it’s a faceted approach: Simon, a rational man, knows full well before section 27 that the situation is untenable and attempts to work out in his mind what can be done about it. There are hints that a crisis is being resolved: while in New York, Simon seems not to be working, although whether that’s a blockage is never addressed. After the women leaves, he returns to his work, staying on alone in New York. In a retrospective section, there’s this exchange:

Q: Do you hear from them?
A: Postcards.
Q: These women spread out before you like lotus blossoms. .&nbsp. .
A: Not exactly like lotus blossoms.
Q: Open, blooming. . . .
A: More like anthills. Splendid, stinging anthills.
Q: You fall face down in an anthill.
A: Something like that. (p. 30)

There’s an echo of the story of Job in this: the author has put Simon into a situation (in this case, what is ostensibly paradise) to see what happens. It’s a minor novel, compared to Barthelme’s other work, but I think that is succeeds at what it’s trying to do.

“But this knowledge of history did not deflect my sadness. She saw my whole despair and, one afternoon as I returned home from the club, she said: “Perhaps even now it is not too late. Change style. Learn to snap. Leave government service, plunge into jungles of commerce.” 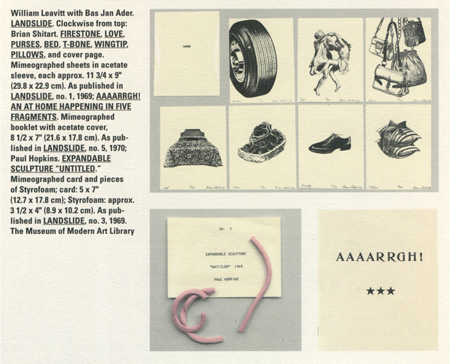 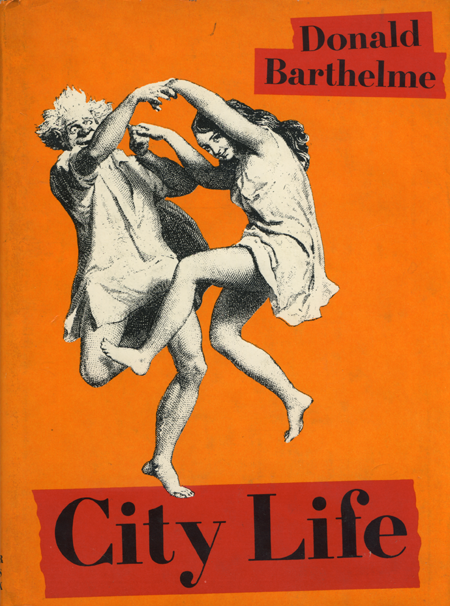 “Smoke, rain, abulia. What can the concerned citizen do to fight the rise of capitalism, in his own community? Study of the tides of conflict and power in a system in which there is structural inequality is an important task. A knowledge of European intellectual history since 1789 provides a useful background. Information theory offers interesting new possibilities. Passion is helpful, especially those types of passion which are non licit. Doubt is a necessary precondition to meaningful action. Fear is the great mover, in the end.”

(Donald Barthelme, “The Rise of Capitalism”.)

“The President looked out of his window. He was not very happy. ‘I worry about Bill, Hubert, Henry, Kevin, Edward, Clem, Dan and their love, Snow White. I sense that all is not well with them. Now, looking out over this green lawn, and these fine rosebushes, and into the night and the yellow buildings, and the falling Dow-Jones index and the screams of the poor, I am concerned. I have many important things to worry about, but I worry about Bill and the boys too. Because I am the President. Finally. The President of the whole fucking country. And they are Americans, Bill, Hubert, Henry, Kevin, Edward, Clem, Dan and Snow White. They are Americans. My Americans.”

“Well, I opened the door. The Doberman came at me raging and snarling and generally carrying on in the way he felt was expected of him. I threw him a fifty-five-pound reinforced concrete pork chop which knocked him silly. I spoke to Constanze. We used to walk down the street together bumping our hipbones together in joy, before God and everybody. I wanted to float in the air again some feeling of that. It didn’t work. I’m sorry. But I guess, as the architects say, there’s no use crying over spilt marble. She will undoubtedly move on and up and down and around in the world, New York, Chicago, and Temple, Texas, making everything considerably better than it was, for short periods of time. We adventured. That’s not bad.”

(Donald Barthelme, “The Abduction from the Seraglio”, p. 95 in Great Days.)

“Q: What do you consider the most important tool of the genius of today?”

ANATHEMATIZATION OF THE WORLD

IS NOT AN ADEQUATE RESPONSE TO