12th of March to 2nd of April
Hen pheasant’s feather does for a fly,
green tail, the wings flat on the body
Dark fur from a hare’s ear for a body
a green shaded partridge feather
grizzled yellow cock’s hackle
green wax; harl from a peacock’s tail
bright lower body; about the size of pin
the head should be. can be fished from seven a.m.
till eleven; at which time the brown marsh fly comes on.
As long as the brown continues, no fish will take Granham

“POUND: The only chance for victory over the brainwash is the right of every man to have his ideas judged one at a time. You never get clarity as long as you have these package words, as long as a word is used by twenty-five people in twenty-five different ways. That seems to me to be the first fight if there is going to be any intellect left.

It is doubtful whether the individual soul is going to be allowed to survive at all. Now you get a Buddhist movement with everything except Confucius taken into it. An Indian Circe of negation and dissolution.

We are up against so many mysteries. There is the problem of benevolence, the point at which benevolence has ceased to be operative. Eliot says that they spend their time trying to imagine systems so perfect that nobody will have to be good. A lot of questions asked in that essay of Eliot’s cannot be dodged, like the question whether there need be any change from the Dantesque scale of values or the Chaucerian scale of values. Is so, how much? People who have lost reverence have lost a great deal. That was where I split with Tiffany Thayer. All these large words fall into clichés.

There is the mystery of the scattering, the fact that the people who presumably understand each other are geographically scattered. A man who fits in his milieu as Frost does, is to be considered a happy man.

Oh, the luck of a man like Mavrocordato, who is in touch with other scholars, so that there is somewhere where he can verify a point! Now for certain points where I want verification there is a fellow named Dazzi in Venice that I write to and he comes up with an answer, as it might be about the forged Donation of Constantine. But the advantages which were supposed to inhere in the university – where there are other people to contrôl opinion or to contrôl the data – were very great. It is crippling not to have had them. Of course I have been trying over a ten-year period to get any member of an American faculty to mention any other member of his same faculty, in his own department or outside it, whose intelligence he respects or with whom he will discuss serious matters. In one case the gentleman regretted that someone else had left the faculty.

I have been unable to get straight answers out of people on what appeared to me to be vital questions. That may have been due to my violence or obscurity with which I framed the questions. Often, I think, so-called obscurity is not obscurity in the language, but in the other person’s not being able to make out why you are saying a thing. For instance the attack on Endymion was complicated because Gifford and company couldn’t see why the deuce Keats was doing it.

Another struggle has been the struggle to keep the value of a local and particular character, of a particular culture in this awful maelstrom, this awful avalanche toward uniformity. The whole fight is for the conservation of the individual soul. The enemy is the suppression of history; against us is the bewildering propaganda and brainwash, luxury and violence. Sixty years ago, poetry was the poor man’s art: a man off on the edge of the wilderness, or Frémont, going off with a Greek text in his pocket. A man who wanted the best could have it on a lonely farm. Then there was the cinema, and now television.”

(Ezra Pound, interviewed by Donald Hall for the Paris Review in 1962.)

More precisely, a bad reproduction of it: 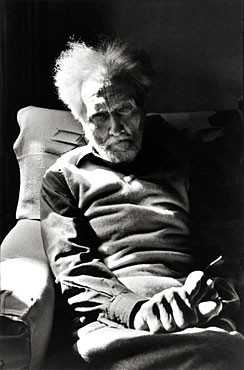 There’s a much better reproduction of this in the print edition of this NY Times review of the show at the Cartier-Bresson Foundation, but it’s not on the web. I like this one because it looks like it’s been through too many Photoshop filters.

This part of the Times article is misleading at best:

What Pound felt is impossible to know. Years earlier, he had been interned for mental illness, and in 1960, he lapsed into long periods of depressive silence and stopped writing. And yet, in the image selected by Cartier-Bresson, Pound’s wild hair, burning eyes and tense hands seem to speak volumes about an old man raging against the dying of the light.