“It was the language of the house itself that spoke to him, writing out for him with surpassing breadth and freedom the associations and conceptions, the ideals and possibilities of the mistress. Never, he felt sure, had he seen so many things so unanimously ugly – operatively, ominously so cruel. He was glad to have found this last name for the whole character; ‘cruel’ somehow played into the subject for an article – an article that his impression put straight into his mind. He would write about the heavy horrors that could still flourish, that lifted their undiminished heads, in an age so proud of its short way with false gods; and it would be funny if what he should have got from Mrs. Lowder were to prove after all but a small amount of copy. Yet the great thing, really the dark thing, was that, even while he thought of the quick column he might add up, he felt it less easy to laugh at the heavy horrors than to quail before them. He couldn’t describe and dismiss them collectively, call them either Mid-Victorian or Early – not being certain they were rangeable under one rubric. It was only manifest they were splendid and were furthermore conclusively British. They constituted an order and abounded in rare material – precious woods, metals, stuffs, stones. He had never dreamed of anything so fringed and scalloped, so buttoned and corded, drawn everywhere so tight and curled everywhere so thick. He had never dreamed of so much gilt and glass, so much satin and plush, so much rosewood and marble and malachite. But it was above all the solid forms, the wasted finish, the misguided cost, the general attestation of morality and money, a good conscience and a big balance. These things finally represented for him a portentous negation of his own world of thought – of which, for that matter, in presence of them, he became as for the first time hopelessly aware. They revealed it to him by their merciless difference.” 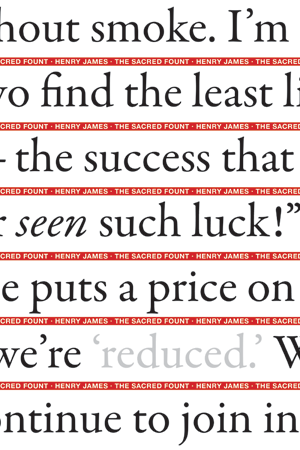 “Gertrude Stein was a great reader. In novels, Henry James’s for instance, characters talk, and in their nuances lurk the subtlest intricacies of the author’s web. Imagine a text of a novel, say James’s The Sacred Fount (1901), from which everything has been extracted except the dialogue.”

Following Guy Davenport’s suggestion, here’s a version of Henry James’s The Sacred Fount from which everything has been extracted except the dialogue. A print-on-demand version can be purchased at Lulu; or, download a PDF version for free.

“BURGIN: I don’t know if I believe in pictures with a book. Do you?

BORGES: Henry James didn’t. Henry James didn’t because he said that pictures were taken in at a glance and so, of course, as the visual element is stronger, well, a picture makes an impact on you, that is, if you see, for example, a picture of a man, you see him all at once, while if you read an account of him or a description of him, then the description is successive. The illustration is entire, it is, in a certain sense, in eternity, or rather in the present. Then he said what was the use of his describing a person in forty or fifty lines when that description was blotted by the illustration. I think some editor or other proposed to Henry James an illustrated edition and first he wouldn’t accept the idea, and then he accepted it on condition that there would be no pictures of scenes, or of characters. For the pictures should be, let’s say, around the text, no?—they should never overlap the text. So he felt much the same way as you do, no?

BURGIN: Would you dislike an edition of your works with illustrations?

BORGES: No, I wouldn’t, because in my books I don’t think the visual element is very important. I would like it because I don’t think it would do the text any harm, and it might enrich the text. But perhaps Henry James had a definite idea of what his characters were like, though one doesn’t get that idea. When one reads his books, one doesn’t feel that he, that he could have known the people if he met them in the street. Perhaps I think of Henry James as being a finer storyteller than he was a novelist. I think his novels are very burdensome to read, no? Don’t you think so? I think Henry James was a great master of situations, in a sense, of his plot, but his characters hardly exist outside the story. I think of his characters as being unreal. I think that the characters are made – well, perhaps, in a detective story, for example, the characters are made for the plot, for the sake of the plot, and that all his long analysis is perhaps a kind of fake, or maybe he was deceiving himself.”