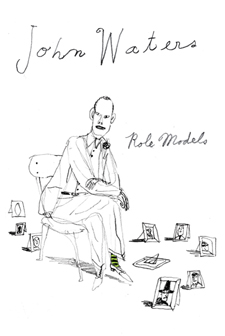 It’s hard not to like John Waters. Certainly his films of the past decade or so don’t make it seem like he’s trying particularly hard; but he’s made his particular aesthetic mark on our culture, and it would be beside the point to go on stressing it. Waters has aged gracefully; his gallery shows in Chelsea are minor but enjoyable, in the same way that his cameos and appearances tend to be. A favorite moment: a few years ago I saw Mr. Waters attired in a brown suit at a show of his, explaining the art to two small girls, whom I assumed, without any evidence, to be his nieces. I remember fondly when the late, lamented Nest‘s visit to his house in Baltimore, much more interesting than one might expect; the same is true is most of his interviews. Role Models is a collection of ten essays; and while some of the material has appeared before and is thus familiar (his introduction to Tennessee Williams’s Memoirs, for example), the book is thoroughly enjoyable and holds together.

What one notes about Waters’s writing is his sense of morality. This is not as surprising as it might be; certainly it could be read from his films, but the layers might confure. It’s in his essays, outside of the realm of fiction, that a picture of how Waters thinks and engages with the world becomes clear. This is apparent from the first essay, an attempt to make sense of Johnny Mathis, an early hero, now a recluse turned reactionary, his sexuality still ambiguous: as much as Waters would like, Mathis can’t quite be reclaimed because he’s solidly himself. The essay starts with Mathis but spirals out to include other childhood heroes that Waters has managed to meet and how they fared against expectations; and finally it ends at Mathis’s house, where Waters realizes that he can’t quite turn Mathis into what he wants him to be. It ends with a meditation on death: Waters realizes that he will die “alone but not lonely,” and wonders what will happen to Mathis, to all appearances a similarly single man. It’s similar to another essay about Little Richard, a magazine piece that didn’t quite turn out: Waters revisits his time with Little Richard and comes to a better understanding of how screwed up his subject seemed to be.

“Leslie” is the volume’s standout: an account of Waters’s friendship with Leslie Van Houten, accessory to the Manson murders. Waters was first attracted, of course, by the scandal and glamour of the story: attractive young people brainwashed by a maniac; eventually he met and befriended her. But the second paragraph announces a swerve:

I am guilty, too. Guilty of using the Manson murders in a jokey, smart-ass way in my earlier films without the slightest feeling for the victim’s families or the lives of the brainwashed Manson killer kids who were also victims in this sad and terrible case. (p. 45)

His status as a celebrity gives Waters the ability to visit Van Houten in prison in 1985; the woman he meets is something of a disaster, a life ruined by a night of insanity. The magazine piece he’d planned is abandoned. They become friends: he comes to see the futility of her stay in the penal system, and the essay is an argument for her parole, which hasn’t been granted. One’s past is a difficult thing: Waters brings in how he accidentally killed a man (an old man walked out in front of his car), and how entirely fortuitous it was that he suffered no consequences (a cop happened to see the whole thing and testified that nothing could have been done). He doesn’t suggest an equivalence between deaths; but some end up paying for chance more than others.

You should never read just for “enjoyment.” Read to make yourself smarter! Less judgmental. More apt to understand your friends’ insane behavior, or better yet, your own. Pick “hard books.” Ones you have to concentrate on while reading. And for God’s sake, don’t let me ever hear you say, “I can’t read fiction. I only have time for the truth.” Fiction is the truth, fool! Ever hear of “literature”? That means fiction, too, stupid. (p. 164)

The essay is a list of five books Waters finds worth reading; it’s an interesting and not entirely predictable list. First Denton Welch’s In Youth Is Pleasure; then Lionel Shriver’s We Need to Talk About Kevin. Christina Stead’s The Man Who Loved Children receives a better appreciation than the boring litany of praise Jonathan Franzen recently trotted out in the NYTimes Book Review: Waters argues that the book’s pure vitriol should be appreciated on its own merits. It’s hard for me not to love any list that includes Jane Bowles’s Two Serious Ladies, which deserves to be in print in this country outside of Bowles’s collected fiction. An finally there’s an appreciation of the use of dialogue in Ivy Compton-Burnett’s novels which makes me want to move her books to the top of the list:

The monstrously intelligent and all-knowing children in Darkness and Day speak like no other children in the history of youth. “Do you remember your Uncle?” a relative asks his nieces Rose and Viola. “You used to be younger,” Rose says with steely reasoning. “That is true,” the uncle answers, “and I feel as young as I did.” “People do feel younger than they are,” she quickly responds. “They don’t get used to a new age , before they get to the next one. I feel I am nine, and I have been ten for a week. I am in my eleventh year.” “I don’t often think as much as that,” her sister Viola comments. “I always think,” answers Rose with a vengeance. .  . After the children in Darkness and Day are told of a passing in the family, they are asked to “run upstairs and forget what is sad. Just remember the happy part of it.” “What is the happy part?” wonders Viola. “There is none,” answers Rose. “Why do people talk as if they are glad when someone is dead? I think it must mean there is a little gladness somewhere.” (pp. 178–9.)

This essay again ends with death: “I have all twenty of her novels and I’ve read nineteen. If I read the one that is left there will be no more Ivy Compton-Burnett for me and I will probably have to die myself” (p. 180). This is flippant, a joke, but there’s a sting there; this is a slight book, but there are hidden depths.